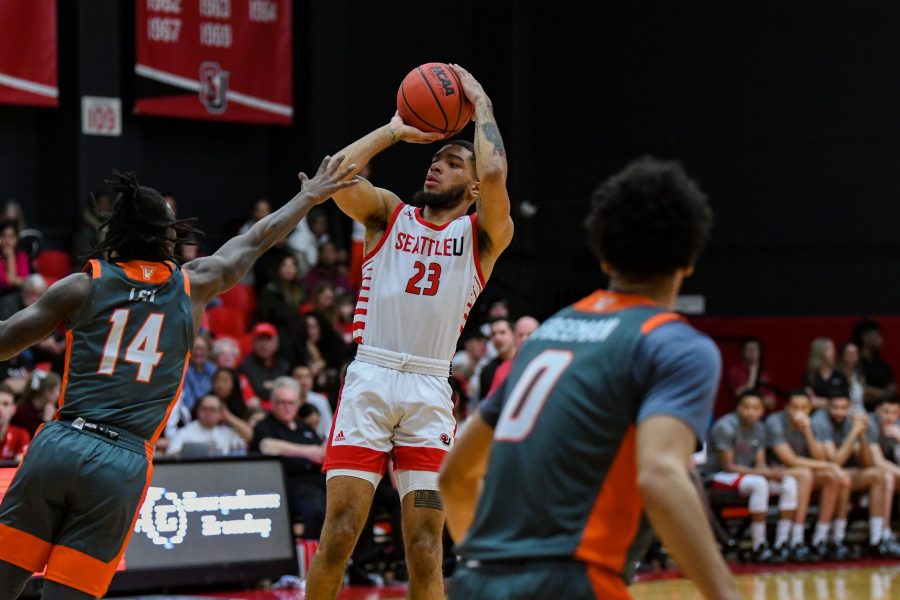 Once Brown finished his classes at SCC in the summer of 2018, he was at pre-season practice with his new team. (Photo courtesy of Seattle U Athletics)

Terrell Brown didn’t think his path would lead him here.

He was an important role player as part of two state championship teams at Garfield High School in Seattle, but didn’t put up the eye-popping numbers that some of his more heralded teammates, like Jaylen Nowell, did. Nowell starred at UW for a year before being drafted by the NBA’s Minnesota Timberwolves.

Many other teammates from his time at Garfield played or are currently playing at Division I colleges across the country, including Stanford, Texas Christian, Utah State, Saint Louis and Long Island.

He leads the entire Western Athletic Conference (WAC) in scoring, with 20.3 points per game. He’s also ranked in the top five in multiple other key categories: third in assists (5.0), fourth in steals (1.6) and even fourth in rebounding (6.2) despite standing at 6’1”, well below average for a DI basketball player.

“His statistics in junior college speak for themselves,” Seattle U Head Coach Jim Hayford said. “He had as good of a year in the NWAC as anyone’s had in the last 10 years, statistically.”

But it took a lot of work behind the scenes to get the chance to show what he can do on the court.

“He did two years worth of work academically in one year,” Hayford said. “He deserves a ton of credit.”

Hayford recalled how Brown was intent on playing Division I basketball when they first met.

“I’m going to find out what I need to do, and I’m going to do it,” he recalls Brown saying.

Once Brown finished his classes at SCC in summer quarter 2018, he was at a pre-season practice with his new team.

“Seattle U had open arms with me; they really welcomed me in,” Brown said.

Hayford recalls that multiple players were immediately impressed with their new teammate, both with his skill but also his leadership on the court, which Brown doesn’t take lightly.

“He’s thinking ‘All right, I guess I’ll do junior college since my cousin is here. 12 months later, he’s playing against a different cousin, guarding each other, on national television,” Hayford said.

One of Brown’s high school teammates was Daejon Davis, who Seattle U played in their season opener last season. Now he’s the starting point guard for Stanford.

Brown became the fourth player at Seattle U to record 1,000 points in his career since the college became a Division I program, needing less than two seasons to do so. He passed the milestone in a win over Grand Canyon on Feb. 20. He has at least a few more games remaining this season and one more year of eligibility to build on that number.

A player who attacks the rim as frequently as Brown does is bound to get fouled a lot. He made just 68% of his free throws in his first year with SU, which he lamented as leaving some points at the line. He focused on them last season and in the off-season and has improved by almost 10%, a monumental jump in one season. In conference play alone, he’s hit a very strong 82% this season, turning one of the few weaknesses in his game to a relative strength.

Correction: An earlier version of this story misspelled Jaylen Nowell’s surname. It is Nowell, not Norwell. We appologize for the error.