Taking It to the Hole : SCC Men’s Basketball Comes Together to Secure First Place 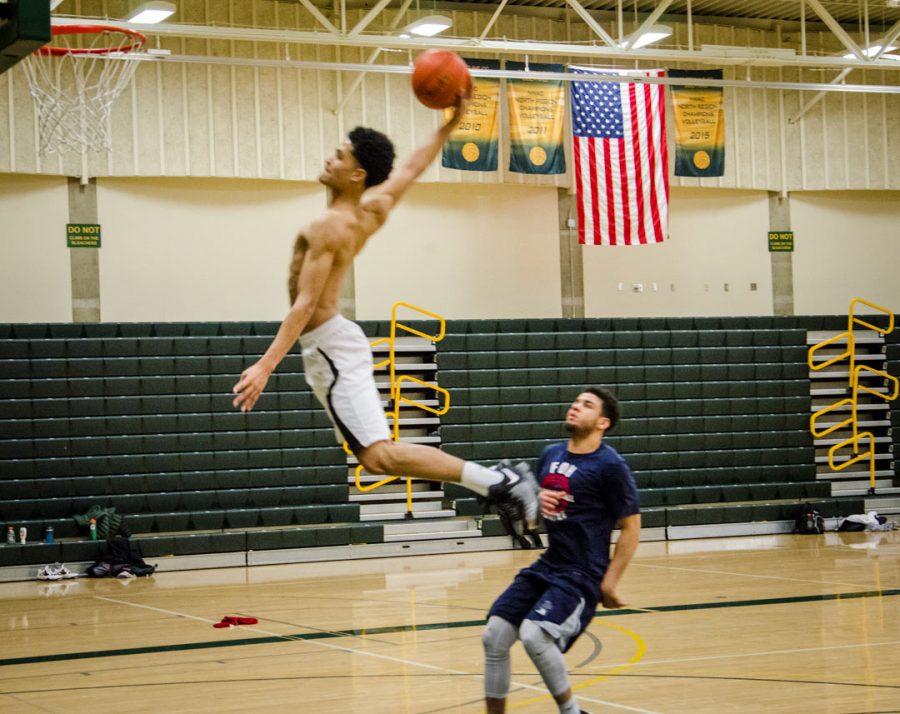 The SCC men’s basketball team is kicking all kinds of ass.

The Phins beat Bellevue College 77-65 on Wednesday, Feb. 22. Combined with a loss by Peninsula College to Skagit Valley that same night, SCC clinched a playoff spot, and now stands alone in the top spot in the NWAC North Region.

Yet, despite its current success, the team started off slow this season. Early on, its record stood at two wins and three losses.

“You know, it’s hard,” Brady said. “I mean, you lose two straight and you kinda start to question, ‘Are you as good as you think you are?’”

Brady said that his biggest challenge this season has been adjusting his coaching style to work with players that he says have been more talented than their opponents in every game so far. He says it’s a definite shift in strategy from coaching teams who go into some games knowing the other team is better and having to find a way to win.

“The major obstacle, in terms of the team, was just learning to blend together, to play together,” Brady said.

CJ Bussey, a guard on the team, said another problem was everybody “trying to get theirs,” until they all learned to “play for each other.”

That lesson took hold in their sixth game, where the Phins entered the second half with a 20 point lead.

“Since (that game), we have started to play like the team that we’re capable of playing like, with confidence, and going into games feeling like we are the better team,” Brady said.

Bussey agreed that progress has been made in terms of team cohesion.

“We’re still figuring it out, but everybody (is) accepting their role, accepting that they (can) contribute to the team.

“That’s why we’re having so much success,” Bussey said. “We’re playing together now, (playing) defense. We’re playing as one.”

Brady said that some of the team’s newfound strength comes from the sophomores on the team this season.

“Usually we don’t have this many, but it’s nice to add some sophomores with your freshman class so it’s not all brand-new young kids,” Brady said. “The older kids tend to help. We have three or four guys who are about 23 years old and that helps.”

Of the 11 sophomores on this year’s team, only four played for SCC last year. The rest played somewhere else and, for a variety of reasons, decided to come to the Seattle area, with most of them returning home.

These transfer students are what Brady calls “bounce-backs.” Some, like forward Dana Abe, who Brady pegs as a likely candidate for league MVP this year, come from four-year schools like Western Washington University. Three of the players, including Bussey, came to SCC from other NWAC schools, such as Yakima Valley Community College and Whatcom Community College.

Brady actually recruited Bussey out of Franklin High School in Seattle during his first year as SCC’s head coach. Bussey was one of the first to be offered a scholarship, but he turned it down to go to Yakima. Brady said that Bussey, like many high school graduates, wanted to get out of town. But then, he said, Bussey decided to come back.

Bounce-backs like Bussey and Perkins, however, do take a hit, since they have to sit out for a year before they can play. This rule only applies to players from other NWAC schools and is meant to prevent coaches from luring good players off an opposing team. Still, they do get to practice with the team for the year they sit out.

Not all the bounce-backs have to sit out a year, though. Some, like Abe, who came from a Division II school, aren’t subject to the rule. The same exemption applied to guard Anddrew Hawkins, who attended a junior college in Arizona before returning home and playing for SCC.
In keeping with the goals of the academic side of the college, one of the of the athletic department’s main endeavors is to get those sophomores, transfer and otherwise, into four-year schools to keep playing, assuming they want to go.

“I think there’s a very good possibility of all 10 of those guys who’ve decided to try to keep playing, (that) we could get all 10 of them to a four-year school to play basketball,” Brady said. “That would be almost as big an accomplishment as winning league.”

Of the 14 players on the team this year, 11 are sophomores. For Brady, this means having a strong team now, but also: “We’ve got a lot of recruiting to do for next year to fill out our roster.”

Aside from transfers, SCC recruits its players from another pool of talent: high schoolers.

“We identify talent and then just spend a lot of time going to high school games,” Brady said. “My date night with my wife usually is a high school basketball game.”

For now, however, coach and players alike are enjoying this moment with their fans.

“It’s always nice to see (the fans),” Brady said. “It’s fun, it’s a really good atmosphere … We had a stretch of, like, one home game out of seven, and so we were on the road for a very long time.

“I was a little nervous that when we came back we maybe wouldn’t have fans anymore,” he continued, “because we hadn’t had a home game for so long, and then (on Feb. 22), you know, our gym was packed, and it was loud, and it was awesome.

“Our fans are really great and it’s just a lot more fun to play in front of people.”

Bussey agreed, saying that the fans gave them the push they needed to get through some tough games: “I wanna say thank you, to everyone that’s supported (us), that’s been behind us, that’s come to all our home games … It’s felt like a big family.”

The Phins lost to Everett CC, 79-69 on March 1, but Peninsula lost to Whatcom, allowing Shoreline to maintain its sole possession of the #1 slot in the North Region. This guarantees that their first opponent will be a fourth place team. There will be a random drawing on March 5 to determine the time and opponent for the team’s first playoff game.