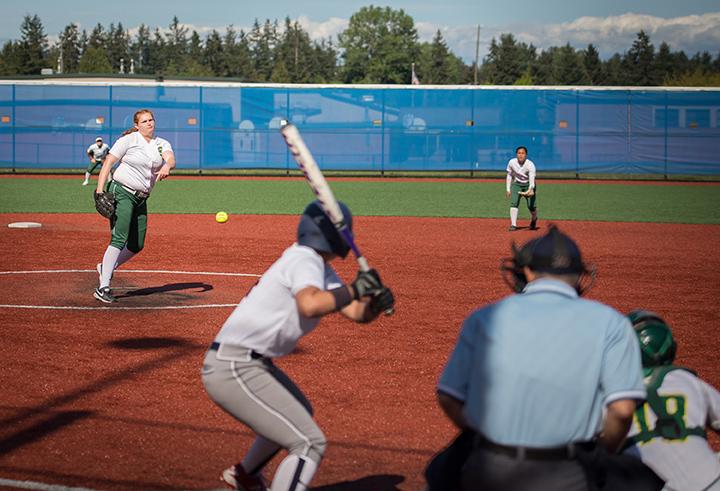 SCC softball season is over, and it was a tough one to watch. The Phins finished an abysmal season at 3-30 in Coach Kelley Kaneshiro’s first year at the reins. However, the season was far from a lost cause.

The team participated in a good number of closely-contested matches. One of these was a May 2 game at Everett, a 10-5 victory where, as Coach Kaneshiro puts it, “We came out hungry. It was a game where we come out and smash when we have the opportunity to, and take advantage of it.”

Shoreline scored six unanswered runs and took the win out of Everett’s hands. It was a game that saw eight of nine hitters reach base, and five record at least one RBI.

There were some bright spots for us offensively this year, including C/1B Drew Camacho, who played a solid defense and lead the team in steals. She battled a shoulder injury during the season, but gritted out the rest of her SCC career, putting up impressive performances against Everett and Skagit Valley down the stretch.

The Phins were pleased by the production out of sophomore 2B Alyssa Giesbers this season, who led the team with a 0.432 batting average. Coaches were similarly happy about catcher Cheyanne Garcia’s year, bringing two home runs and a winning attitude to a catcher position decimated with injuries; and for the baseball nerds out there, a solid 0.202 SecA (secondary average or extra bases) and 13.5 RC (runs created).

The team leader in Wins Above Replacement (or WAR, the statistic that summarizes a player’s total contribution to the team) this year was Shelby Reyes, as the five tool player (someone who hits often and far, and runs, throws and fields well) followed up an incredible season in 2016 to put up an 0.804 OPS (combined on-base and slugging percentage) and led the team in plate appearances, hits, doubles, RBI and struck out an unbelievable three times in 109 AB.

“It was nice to see the competitiveness,” Kaneshiro said of the 2017 season. “Even though the numbers were low, having 10 healthy on a good day, you could see that ownership of their positions, that was something good to see this year.”

The team may be losing some of its stars for 2018, but there is no shortage of potential on next year’s club. Freshman pitcher Hope Lawrence put up a solid campaign, splitting starter duty with sophomore Dakota Green, and posting 57 K over 83.2 IP on 13 starts, finishing 12 of them herself.)

There is big potential to win next season, and with a full offseason without a coaching shake-up and ample recruiting time, there’s good reason to believe Shoreline softball can be a force in the NWAC coming next spring.

“It will be exciting to see,” Kaneshiro says.