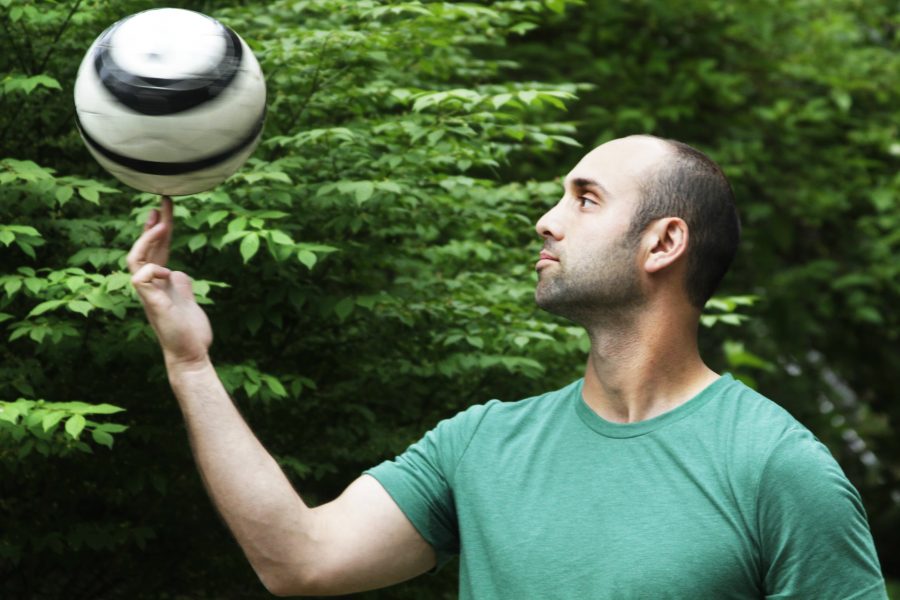 Photo by Randy Hatfield
Caption: Josh Cardin is as focused on the field as he is spinning the ball.

When Josh Cardin was a kid, he competed with and against his older brother in everything.When he joined organized soccer by the fifth grade he wanted to play with his brother and friends, so he had to play two years up. Despite having to play against bigger players, he was named “Defensive player of the year” two or three years in a row and helped the team to three straight undefeated seasons.

“I didn’t have the technical skills to play midfielder or forward, so I played left and right back wing on defense,” Cardin says. “My two greatest attributes were my speed and fearlessness, which made me a perfect defender.”

There, he also coached girls basketball, five years of football, and one year of track and field, and has had remarkable success. He helped lead the Men’s Track team to a “combined” State Championship and district 1 Championship, as well as four straight playoff appearances for the football team.

“I think the one thing that kind of separates me from a lot of the soccer coaches is that they are so narrow to one sport,” Cardin says. “I’m bringing both a knowledge with a lot of different sports and I think I’m going to bring an aspect to the game that…is going to bring a lot more balance athlete out on the pitch, and hopefully that will give us the edge we need to win a few more soccer game this year.”

But Cardin’s coaching resume and ability go beyond just that. He has been an Assistant and Goalkeeper Coach for FC Edmonds, a Soccer Club serving players predominantly from the greater Edmonds, Lynnwood, and Mountlake Terrace areas of Western Washington since 2014.

Cardin currently works with the FC Edmonds G05 team, an elite premier team that his daughter plays for. Last year, it was the first Girls U9 team to win a U10 State Championship for FC Edmonds.

“Winning the State Cup was awesome for so many different reasons,” he says since the team had to overcome the age difference while playing five games in less than 72 hours.

“And yes it was very special to share all of this with my daughter who played extremely well as our goalie,” he says.

“I can’t take full credit at all,” he says. “We have a very good training coach and a great game coach that I shared all those wins with. Us three coaches complete and compliment each other… mixing for the perfect storm.”

“The other thing is that we spent a lot of time on technical training with the girls,” he continues. “If you, as a coach, can get your whole team to see the big picture, to come together as a whole, rather than the parts, then you can build something special at any age and any level.”

Cardin decided to come to SCC when George Dremousis, the SCC Head Men’s Soccer Coach encouraged him to do so.

“He really loved my coaching style and what I was doing on a development level with the JV(Junior Varsity) team,” Cardin says.

However, coming to SCC was not an easy decision for Cardin at the time because he was still signed up to coach football at Mountlake Terrace in the fall.

“I sat down with my family and decided that coaching collegiate soccer was my true passion and decided to apply for the SCC job,” he says.

Cardin then met with the director of the Athletic Department, Steve Eskridge and spent some time going over goals for the program and what he would do if he was hired.

“All I knew at the time was that I was ready,” Cardin says. “Previously, I spent the last three to four years being mentored by some amazing people that coach with such passion and integrity. It’s absolutely contagious and I just can’t get enough of it, which is why I couldn’t turn away from this amazing opportunity at SCC.”

“I think he’s going to be a good coach for us,” Eskridge says.

According to Cardin, the league the Phins compete in (NWAC) is a tough league because of powerhouses like Everett and Edmonds, but he says he is absolutely confident with the Phins.

“I will probably be coaching soccer for the rest of my life,” he says. “So this is my beginning, I am hoping to build on Coach Matt’s success from last year and build a lasting legacy of winning here at Shoreline Community College. Go Phins!”