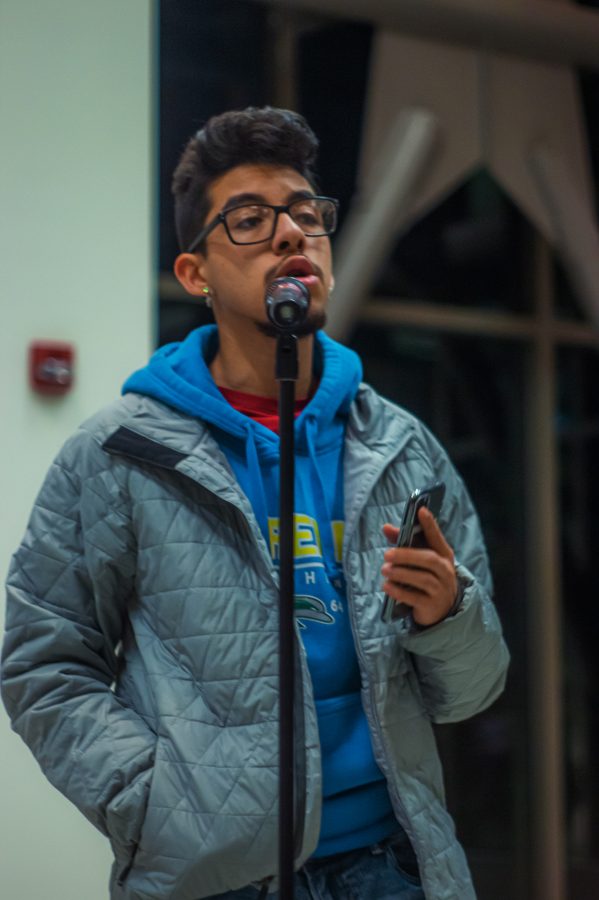 SCC men’s soccer players and coaches came to a Jan. 22 Board of Trustees meeting to protest the shutdown of their team. (Photo by Lance Allegro / The Ebbtide)

CORRECTION: An earlier headline for this story suggested men’s soccer has already been cut. The decision has not been finalized, and may be changed. We apologize for the misleading headline.

The future of men’s soccer at SCC is in major peril as the school looks for more ways to attempt to balance the budget.

On Dec. 31, SCC notified the Northwest Athletic Conference (NWAC) of their intention to move forward with plans to withdraw from the league for the 2020-21 academic year. The NWAC requires schools to notify the league office prior to Jan. 1 if they are not planning to participate in a fall sport in the upcoming year. This decision is not binding, but if a team decides to drop out after this date there is a monetary penalty from the league.

Marisa Herrera, SCC Vice President of Students, Equity and Success, said that information presented to her and other members of administration showed that “women’s soccer has demonstrated a marked improvement in this last year in their GPA and persistence rates as a sport,” as compared to the men’s team, which she cited as having “historically low academic retention, low GPA’s and low persistence toward completion.” According to Herrera, six of the 19 players on SCC’s roster in the fall were academically ineligible.

One of the key parts of the original decision was regarding the high cost of maintaining SCC’s on-campus field at the North end of the campus. Through the 2018-19 academic year, both soccer teams regularly used this field for both practices and games, although multiple current and former players have commented that it has long been one of the worst fields in the NWAC. However, SCC has not used the field at all this season, instead playing at Twin Ponds Park, which is rented from the City of Shoreline for both weekday practices and Saturday evening games.

“We do not even use the field on campus. We play at Twin Ponds, and we practice there as well. Why are we spending money maintaining a field that is not even played on?”

Holmquist went on to suggest that SCC could instead follow in the footsteps of Edmonds CC, which rents out its multi-purpose field to help offset the cost of maintaining it.

“The way we were alerted that the program was going to be cut was unfair,” sophomore Matthew Lewis said. “We were alerted first on January 9th. We were then told later that (SCC) had been talking for over a year about cutting our program. How can you sit there and tell us that you’ve been planning to cut our program for over a year with little to no warning?”

However, it’s not just administration that could have helped students be less in the dark. In June 2019, Athletic Director Steve Eskridge and both soccer head coaches (Joseph Ademofe for the men and Shaun Warner for the women) were made aware of the fact that soccer was potentially in danger of being cut. Eskridge said that coaches were not specifically given any instructions that they should either tell their players or that they should not tell their players.

Eskridge was out on medical leave from mid-November through Jan. 3, but learned of the decision on Jan. 2. Just as with administration, the athletic department did not reach out to players as soon as the information was available, as the students did not figure out until a week later.

June: SCC notifies athletic department that both men’s and women’s soccer are under consideration to potentially be cut after the 2019-20 school year. In addition to the simple financial issues of operating a team, SCC cited the soccer programs as having lower GPAs and persistence toward completion of degrees than other teams within the athletic department and the student body as a whole.

Oct. 31: Multiple members of administration including Herrera and SCC President Cheryl Roberts meet to discuss findings and projections about the potential impacts of cutting the soccer programs.

Dec. 31: SCC submits a recommendation to withdraw both soccer programs from the NWAC, sent to the SCC Board of Trustees (who would make the final decision) and to the Executive Director of the NWAC, Marco Azurdia. At some point in the next six days, Azurdia relays this decision to other coaches in SCC’s North Division of the NWAC.

Jan. 6: One of the NWAC North coaches contacts one of the players on SCC women’s soccer team that still has a year of eligibility remaining, interested in potentially having the player transfer to their school. This is a fairly common practice when teams are folding. The player in turn tells SCC women’s soccer Head Coach Shaun Warner.

Jan. 7: SCC officially notifies the athletic department of the decision.

Jan. 8: SCC notifies student-athletes of the decision, according to Herrera. This date is in direct conflict with statements by Lewis and fellow sophomore Santiago Armenta earlier in the meeting, which asserted student-athletes were not contacted until Jan. 9.

Jan. 9: SCC officially notifies all other members of campus of the decision.

Jan. 10 and 17: SCC administration meets with the student-athletes to discuss the decision. Based on information presented by the athletic department and student-athletes in these meetings, SCC revises their recommendation to the Board of Trustees, instead recommending the school cut only men’s soccer and retain women’s soccer.

Jan. 23: SCC Board of Trustees meets. Assistant coach Holmquist, three players and Herrera all make presentations for the board to consider.