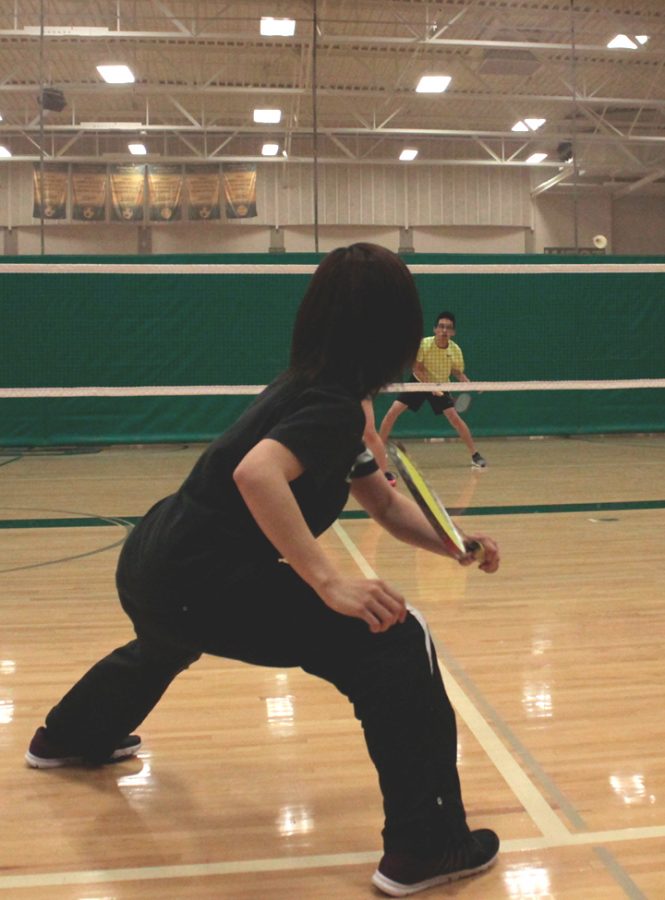 Badminton Club is in full swing. And things are starting to get competitive.

The club recently hosted a tournament in the gymnasium which provided the chance for many of its members to flex their muscles and test their skills against one another.

“It’s really exciting when you meet some other good players, when they can play a really intense game with you,” said Vice President Ho Shek.

Back in January, the Badminton Club got re-recognized by the Associated Student Government and added gym time for badminton on Wednesdays. Now a weekly wave of racket-wielding students descends on the gymnasium to play a sport that not many people here in the U.S. know much about.
Local
During their weekly meetings, it is common to see four games going on all at once, with singles and doubles matches interspersed throughout the gym.
Shek said that members usually trickle in after classes, arriving whenever they can make it and staying for however long suits them.

For some players, between-the-legs or behind-the back shots seemed to be pulled off with ease. Much of the time, though, players movements are so subtle that they barely move their feet and still keep rallies going and going.

But for the uninitiated, don’t be daunted; students with a variety of skill levels play at these meetings, not just experts. The setup is informal, with games starting and stopping at their own pace in a sort of free-for-all.
For instance, there is a bin filled with rackets that you can just take and start a match with. And with all those games going on, interference between courts is common, but no one gets upset; a leisurely energy permeates that half of the gym during badminton hours.

“Some people have a history playing badminton, but it’s okay if you want to join our club if you have no experience,” Shek said.

According to Badminton Club member Kelvin Kam, a former Running Start student who has played badminton for three or four years, more than 40 students came out and played badminton in the winter quarter.

Kam said that they typically hold a tournament every quarter. In the future, the group plans to hold a tournament every month.
Global
Badminton has existed for over two millennia. It originated in ancient Japan, India, Greece and China from an archaic pastime known as “battledore.” Initially, the purpose of the game was to hit a device back and forth as many times as possible without letting it hit the ground. It was essentially the hacky sack of Julius Caesar’s generation.

In the U.S., badminton is often thought of as a leisure game to play during Memorial Day weekend barbeques, but it is also an extremely popular sport played around the world.

Growing up in Hong Kong, Shek has played badminton her whole life.

“I think it’s just my culture,” she said. “Every one of my friends liked to play badminton, it’s one of the biggest sports in Asia.”

Going into next fall, there are no plans on slowing down the shuttlecock (which is not just a funny word: it’s the name of the device they hit with their rackets).

Check the intramural schedule below for days/times of meetings if you’re interested in joining before the end of the year.