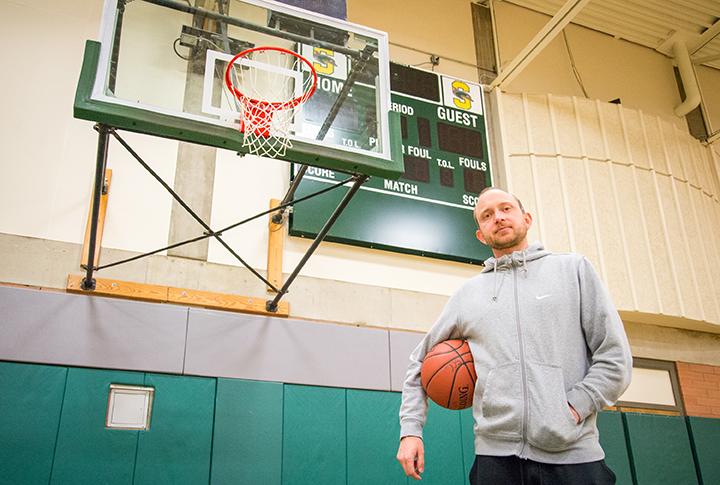 Shoreline Community College’s head men’s basketball coach and athletic director Donald Brady will be leaving at the end of this month. This is both shocking and sad news for a lot of students at SCC, as his charm and personality have resonated with many over his three years working in SCC’s athletics.

To many student athletes at SCC, Brady is a supportive lifeline who always wants the best for each individual who meanders through his cramped office. He works throughout the day assisting with everything from washing towels in the weight room to pumping up volleyballs to selling hot dogs at baseball games. Brady truly is a jack of all trades.

Hired in May 2014 as the basketball coach, it wasn’t until a year later that a vacancy for Facility Events Coordinator came up and Brady jumped at the opportunity.

However, coaching is his passion. He worked as an assistant basketball coach at Bellevue College for six years prior to his move to SCC, as well as two years coaching at the University of Redlands in California.

SCC will always have a place in Brady’s heart.

“It’s a really connected community,” he reflects. “Everyone gets along, we get a lot of support from our students, from the general population … it’s kind of like a community feel, like everyone’s in it together.”

His growth as a coach and as a leader was displayed by his tenacity on the court, taking a team that went 6-8 his first two years and making them league champs. The banner in the main gym commemorates this high achievement, and his team’s success and their embracing his leadership led him to be North Region Coach of the Year, as well as SCC Coach of the Year.

The “Bingo” rally shirts from his championship team are still filtered in among the student body, a lasting reminder of how special the season was.

“This was the greatest professional experience of my life,” he says. “My position allows me to connect with so many students at Shoreline, even to employ students, that I would otherwise never get a chance to meet.”

He can’t get through an interview in his own office without a multitude of students and staff alike coming in to talk hoops, ask for supplies, congratulate him on his new job or even just stop in and say hi. That’s just the welcoming environment he has created in the athletic office; no matter what the sport, what the situation, people trust him to take care of it.

He’s a vital part of our SCC community, even if you don’t see the value of what he does on the surface.

“He’s the perfect fit for the school,” West says. “He became a fixture. He’s one of those guys that does a lot of things you don’t always see.”

When asked about what he will miss most about SCC, Brady’s answer was obvious from the get go.

“I’m gonna miss the people. That was the hardest part of making this decision … leaving the relationships I’ve made here, by far,” he said. “Professionally, (Bellevue College) isn’t a huge difference, but I’ll certainly miss the comradery, that certain welcoming vibe that isn’t necessarily the same on every campus.”

Coach Brady will officially take his leave on Friday, April 28. It will certainly be different in his office in Room 3001. But there’s a man waiting in the wings to take over his duties. Ben Reindel, a former assistant softball coach already integrated with the community at SCC, is more than willing to take any questions or concerns that would otherwise come to his role.

There’s no doubt the hoops coach left a lasting impact on Shoreline, far beyond his work on the court. One can only hope SCC can find another championship-caliber coach to take over the basketball team. But one thing’s for sure: there never will be another Donald Brady.