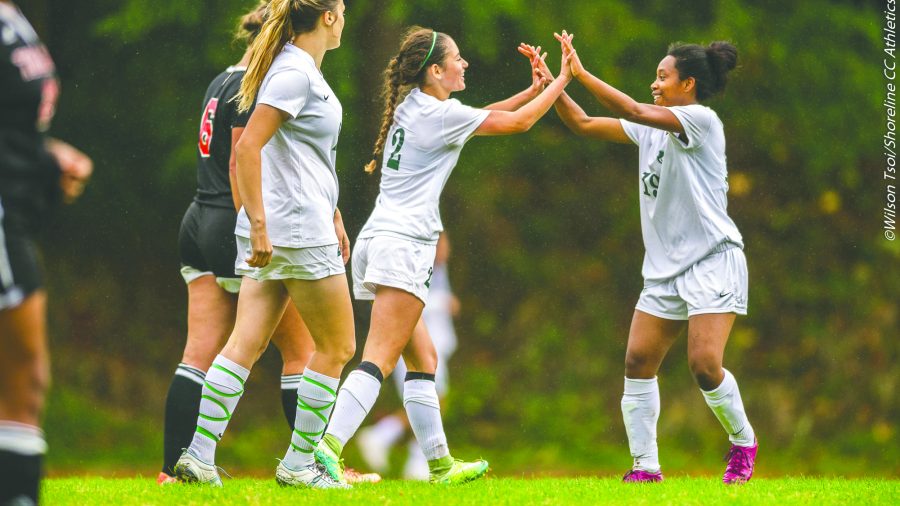 The clock is ticking. With three games left in the regular season, the women’s soccer team is in a three-way race with Whatcom and Everett for two spots in the Northwest Athletic Conference Soccer Championships.

The Phins split two high-scoring games this week. On Monday, the team lost 6-1 at Peninsula, and beat Skagit Valley 6-0 on Wednesday. Soccer standings are different than most other sports in that position is calculated by points that are scored by winning or tieing games, rather than number of wins. Winning is worth two points, ties are worth one, and losing is with no points. This is important information as our women and men’s soccer teams are racing for bids in the NWAC Soccer Championships.

If the season ended today, the Phins women’s soccer would make it into the playoffs by one point. Peninsula has already clinched first place in the division with 36 points, Whatcom is currently in second place with 23. Shoreline and Everett have 19 and 18 points respectively. With three games left in the Phins will end the season by playing Edmonds, Everett, and Whatcom.

Shoreline is Josh Cardin’s first head coaching job; he took the job in August. Coach Cardin has been coaching for the last 11 years and in addition to soccer, he coaches football, basketball, and track and field. He also coaches Edmonds FC, a premier league team, and coaches soccer at Mountlake Terrace High School with Shoreline men’s soccer coach, George Dremousis.

In addition to having a new coach, the team has been dealing with injuries all season long.

“Our freshman class has really stepped up, because our sophomores have been pretty banged up,” Cardin said.
Among the freshmen holding it down for the Dolphins are leading goal scorer Careena Alaoui, who’s been dealing with injuries of her own all season, Shoreline native Madisson Lowdon, and Brooklyn Gratzer from Bonney Lake.

The Phins have made it this far on the back of their excellent defense. Coach Cardin is quick to highlight out how well the team has done defensively this season: “Our defense is just phenomenal, one of the best back lines I’ve seen or played against this year.”

Shoreline has allowed the second fewest goals against in the NWAC North division.

Sophomore goalkeeper Nazareena “Naz” Hernandez has started every game in goal this season after splitting time in the position last year.

“Naz has been phenomenal in goal, definitely a top five goalie … and has made some amazing saves,” said Coach Cardin.

Naz’s four shutouts are the second-most in the division. Two of those four shutouts came against remaining opponents Edmonds and Everett.

The Phins haven’t lost to any of their remaining opponents. The team has a win and a tie against Edmonds, has beaten Everett twice, and has had two draws against Whatcom. This is good news for a team that could finish second in the division if they win out. The Phins next home game is 12:00 p.m. on Saturday, Oct. 22 against Edmonds at Twin Ponds Field.