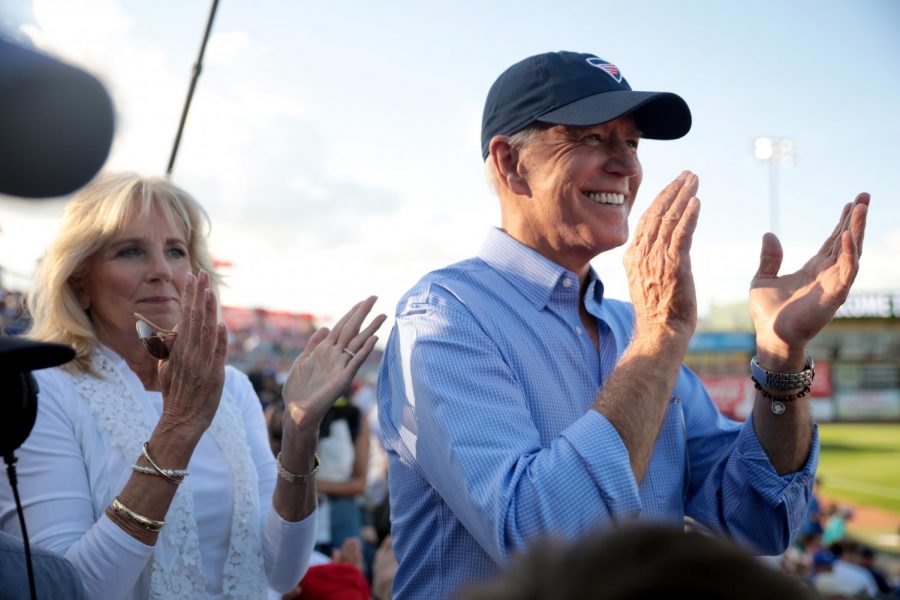 In a turbulent election cycle, characterized by juxtaposition of character more than policy, America needs to make her voice heard. One candidate offers a vision of unity, the other a vision of vaguely-defined “winning” that only truly benefits the rich and white. The choice has never been more clear.
The Ebbtide urges you to vote Joe Biden for President of the United States.
Biden is a hard working, honest man with a dedication to bringing out the best in us. He entered politics through a belief in civil rights, and is oft to remind us that’s what launched his campaign this cycle. He is running as a unifier, a coalition builder, and a return to normalcy.

More than that, he’s running on decency. He seeks to end the politics of name calling, interrupting and self-dealing. He’s staked his run on a belief that the American people are better than our current representation in D.C., that we are able to listen to and respect one another, even when we vehemently disagree.

Maybe he’s naive. Maybe we’ve passed that point, where we can treat each other with dignity and realize that, at the end of the day, we agree more than we disagree. Maybe Trump’s America — one where right wing factions are in constant conflict with left wingers — is real.

That’s what this election is about: the soul of our nation. Depending on who wins, we can show that America can be whole again, or we can continue to prove that the Divided States of Trump are here to stay.

Reading the news, it seems like a radical proposition, the possibility of unity. Politics are so bitterly divisive that speculation of a civil war is commonplace. But if anybody is up to the task, it’s Biden.

You can see it after campaign events or town halls, when he stays after his speaking time, just to listen to what the audience has to say. You can see it when he gives a kid with a stutter his phone number, when he consoles grieving families. If nothing else, Biden cares about people.

Given the current occupant of the oval office, that alone would be refreshing.

But in reality, Biden is running on a progressive platform — it just doesn’t look like it by comparison to his primary competitors.
Higher Education
Let’s take an example that applies to all of us — his plan for higher education. It’s a far cry from Bernie’s free college for everyone, but has a similar effect. The Biden plan calls for free community college for everybody, and free public university for anybody from a family making less than $125,000 a year. He’ll also forgive student debt held by anybody working in a public service profession.

Think about that, ‘Phins. All the tuition you spent this quarter would still be in your bank account if Biden were president right now. Maybe it’s not as bold as Bernie’s proposal, or Warren’s, but it’s a lot more than what we have right now.

We have reason to believe this issue is one that rings personal for him: his wife, Jill Biden, is a professor at a two year college in his home state of Delaware, and was the first second lady (quite a mouthful!) to keep her job while in office.
Jobs and Healthcare
Biden has been a longtime supporter of unions, something that hits home for many of us. As president, his plan calls for “strengthening worker organizing, collective bargaining, and unions.”
Climate
His climate plan uses the framework of the Green New Deal popularized by progressive in the Democratic Party, albeit with a lower price tag. It’s been endorsed by climate groups and unions alike, as it will both create jobs and address the pressing issue of climate change.

We understand the pain of voters in the progressive wing of the party, disappointed that a moderate candidate won the primary over the multitudes of progressive options. Some of us are among you. But we can’t throw out an opportunity for progress or continue the reactionary trend of the past four years because our first choice isn’t the nominee.

Progress isn’t an all-or-nothing process, and it surely isn’t an all-or-take-three-steps-back process. Biden has a lot of questions to answer about his policy plans, and we must be diligent after the election to make sure he follows through on them, but he’s looking in the right direction. And come Jan. 20, we look forward to pushing him closer to the big solutions our nation needs.

For now, though, it’s time to vote.