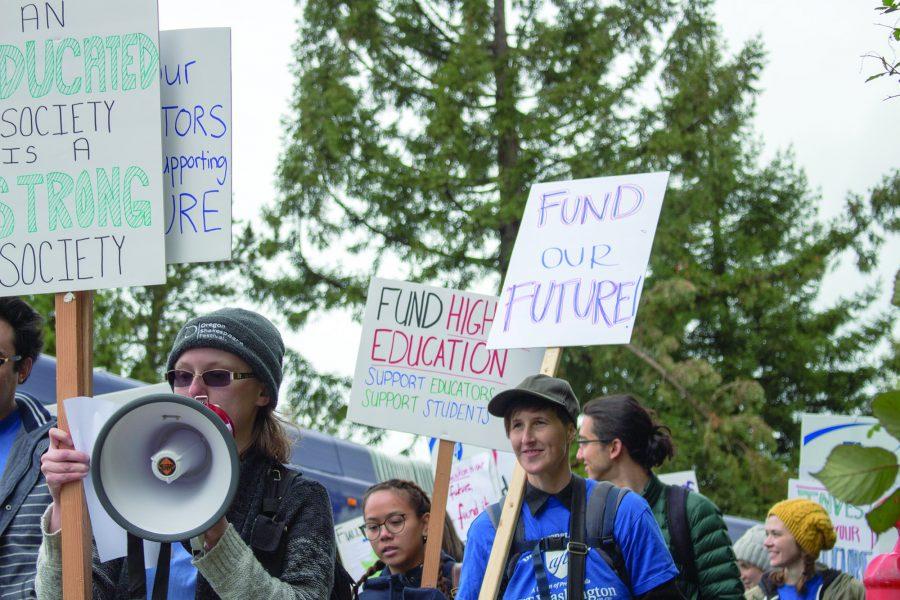 SCC was ablaze with passionate speakers and enthusiastic crowds as underpaid faculty and staff cried “no more!”

The failure of Washington state to tax the rich and properly fund higher education came to a head on April 16, 2019 when nine community and technical colleges (CTCs) in the Seattle area held staff and student walkouts.

The demonstration began at 9:45 a.m. just outside the main PUB area. A number of speakers came from around Washington state, including union leaders, education directors and even a King County executive. 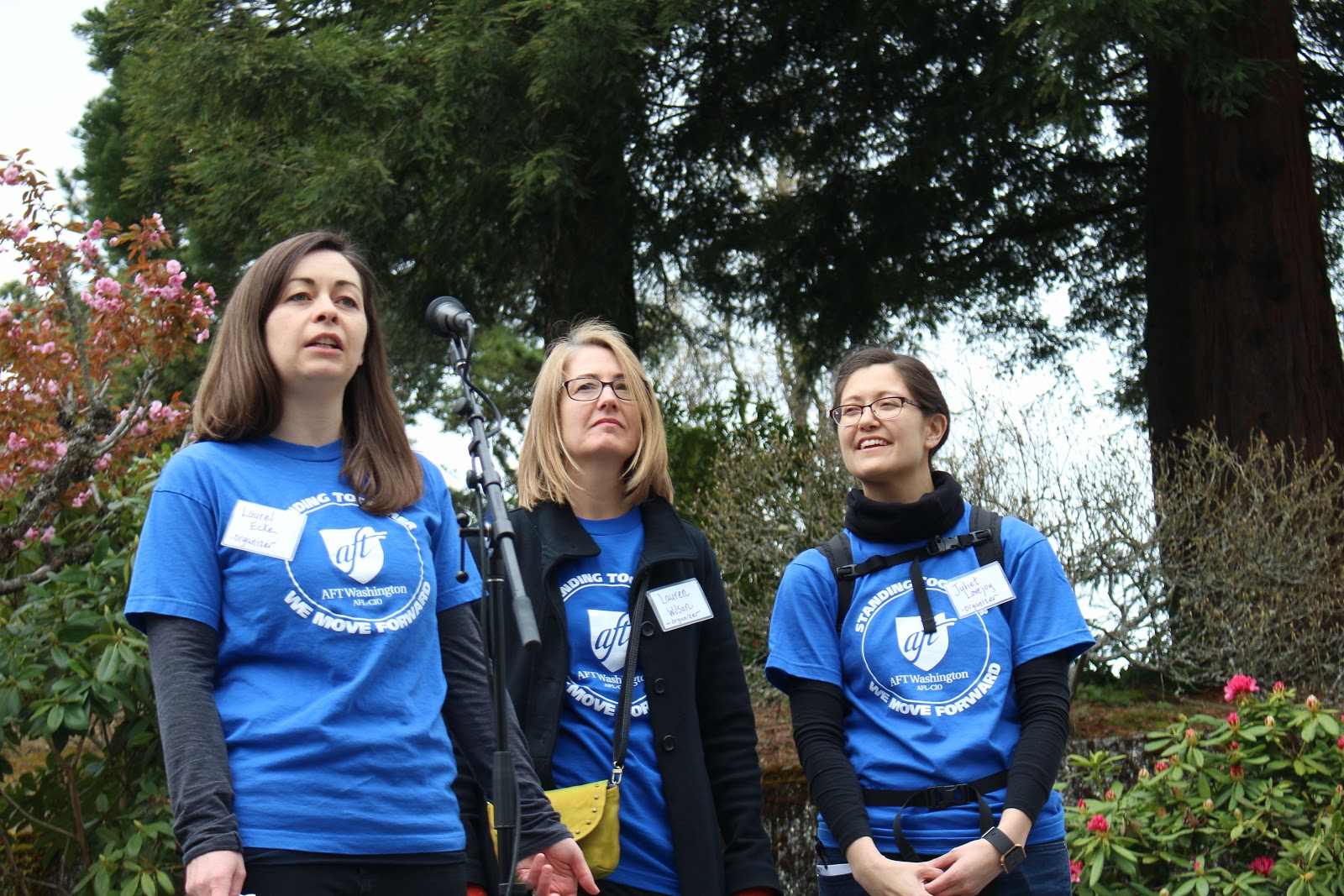 Laurel Ecke is a professor of psychology at SCC first caught wind of the protest at North Seattle College where she also works part time. According to Ecke, when she presented the idea of organizing at SCC, SCC ESL Professor Lauren Wilson and  SCC Math Professor Juliet Lovejoy picked up on it immediately. They only had three weeks to organize this event.

Ecke said the reason for their success was because of how well they worked together. With the school administration on their side, they obtained paid professional leave for any faculty that wanted to participate. Ecke also stated that one of the difficulties in organizing the event was the irregularity of adjunct faculty schedules. Wilson, Ecke and Lovejoy kicked off the morning by introducing speakers, and enthusiastically encouraging participants to write they’re legislatures and participate in the march. 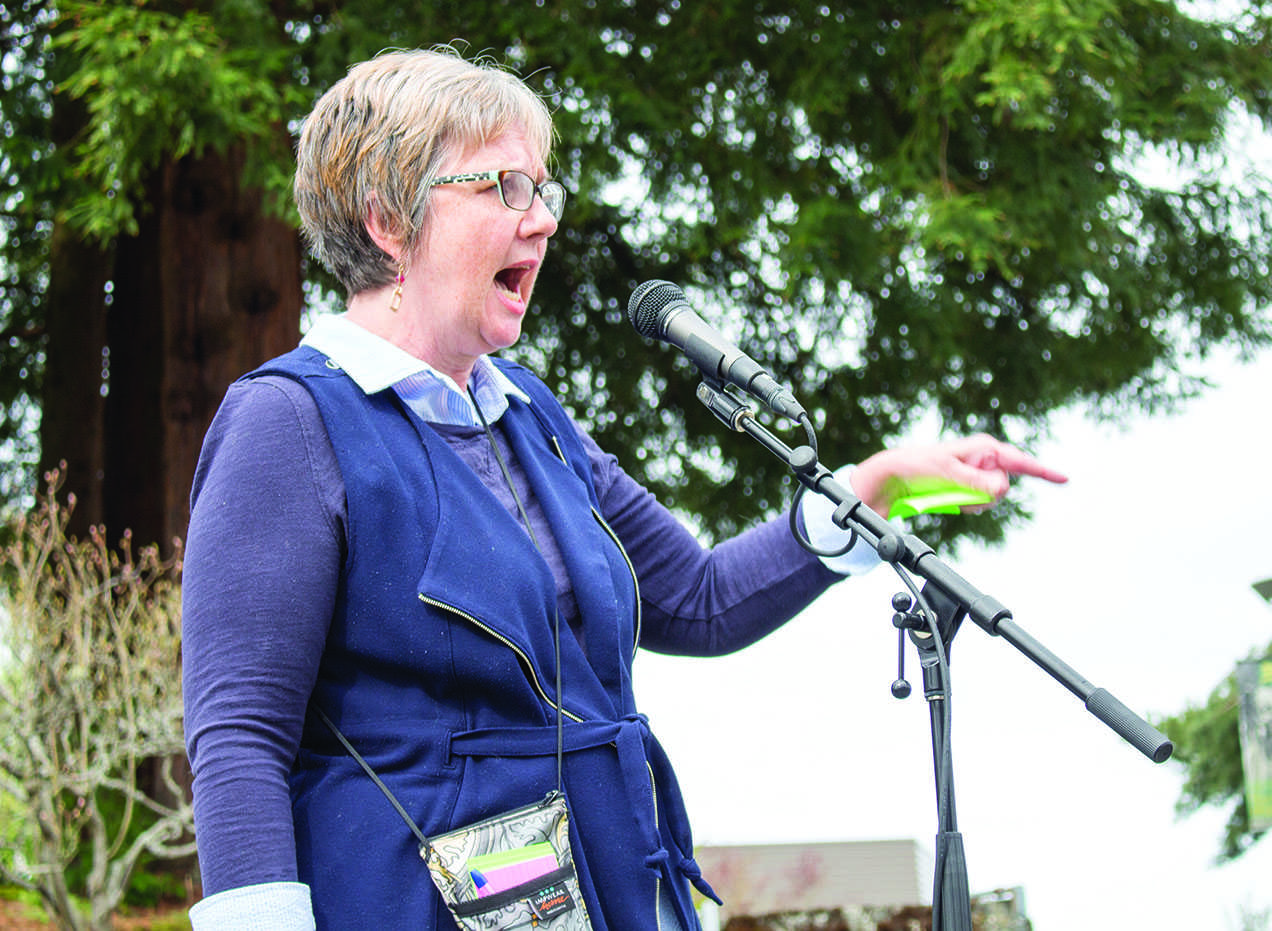 Elizabeth Hanson is an ESL professor at SCC and has been teaching at the college since 1992. She spoke about the billions of dollars in tax breaks that could be used to fund higher education. “I’m standing publicly in opposition to the 700 tax exemptions and tax breaks that our state legislature grants to the richest people and corporations in our state. If we hadn’t granted these tax breaks, we would be pulling in an extra 10 billion dollars every year.”

Matt Reiman is the President of the Shoreline Education Association and an SCC alumni. He talked about how CTCs are like “swiss army knives with all the tools you need” saying that tool is getting rusty due to neglect and lack of funding. “An educated populace is essential to a tolerance equitable, democratic government. Democracy requires an educated constituency. And following that Logic. Education is a right, not a privilege” 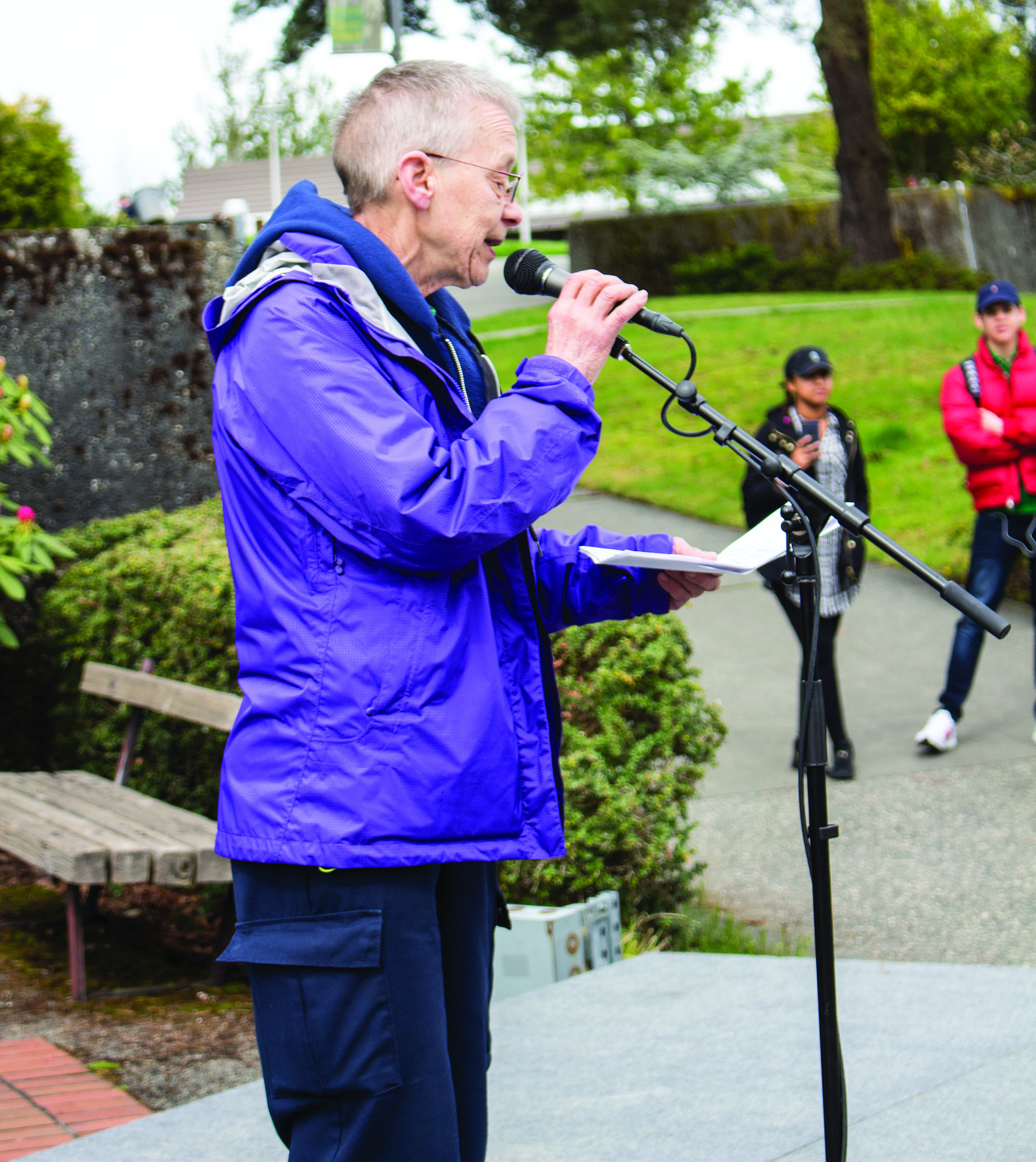 Paula Lakasezek is the president of the Washington State Federation of Staff Employees UW local 1488 and a plummer at the UW. She came to talk about the tuition increase being due, in part, by hiring unnecessary administrators. Lakasezek has successfully fought and won many battles for better wages for janitors at the UW. “Apparently as colleges and universities have had more money to spend, they have chosen it to not expand their instructional resources. They have chosen instead to enhance their administrators and staff resources.” 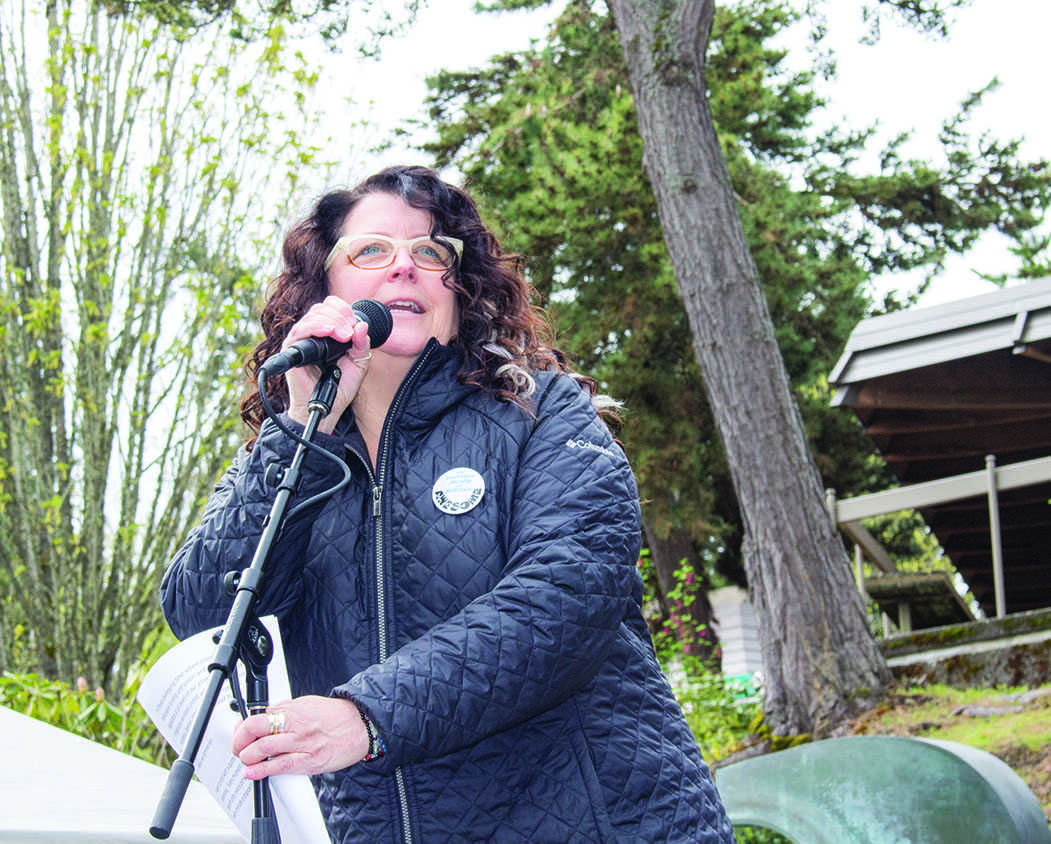 Phyllis Campano is the president of the Seattle Education Association and spoke about successful protesting . Her organization successfully increased living wages, retirement and healthcare for King County school bus drivers. “It’s imperative that we stand together, united with our families, our communities and our students and other unions. When we stand together, we win.” 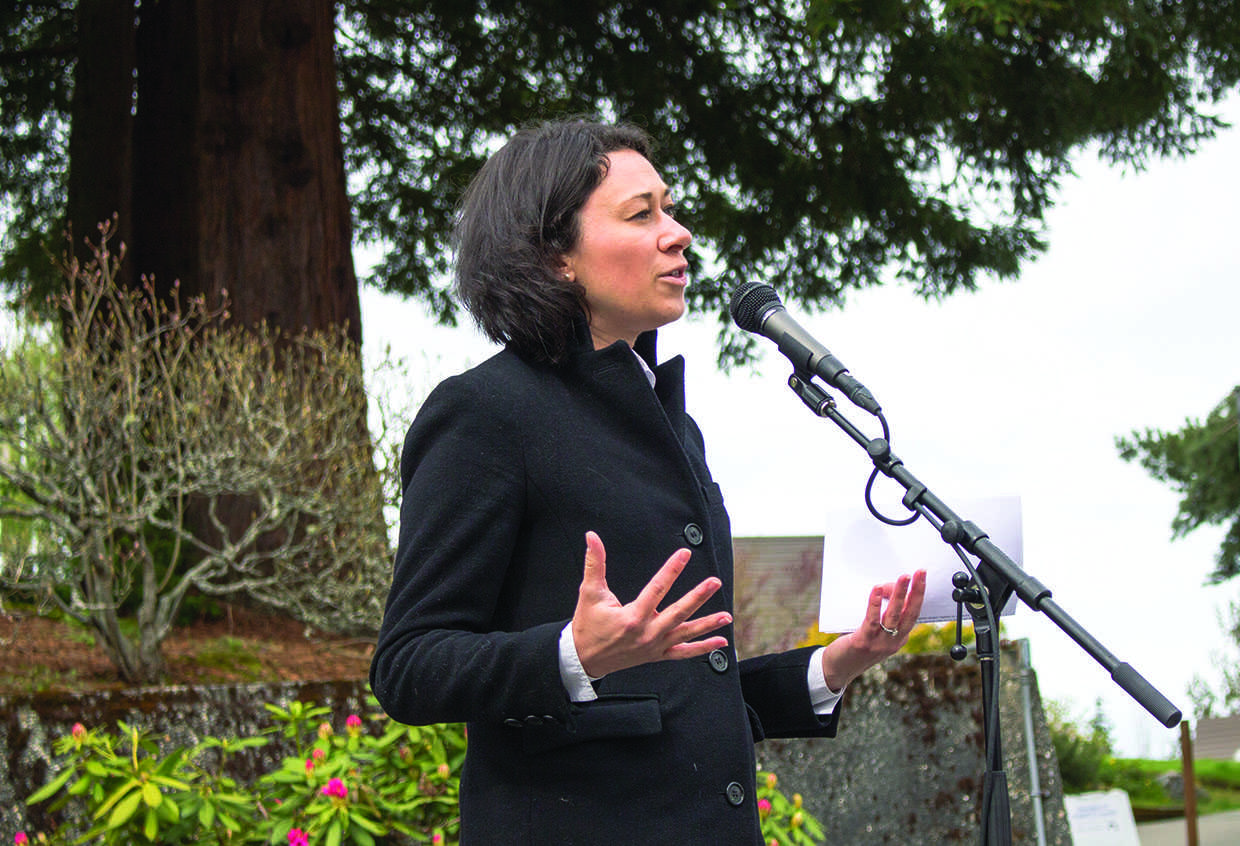 Rachel Arteaga is the associate director at the Simpson Center For Humanities and talked about being specific when demanding state money. Arteaga defended the Humanities department saying “ in education it’s the first thing they take.” “Very specifically, we need more funding for community colleges, more funding for faculty pay. These are high opportunity spaces and low cost. Washington state has an opportunity right now to be a national leader on this issue” – Rachel Arteaga on adjunct (part time) faculty 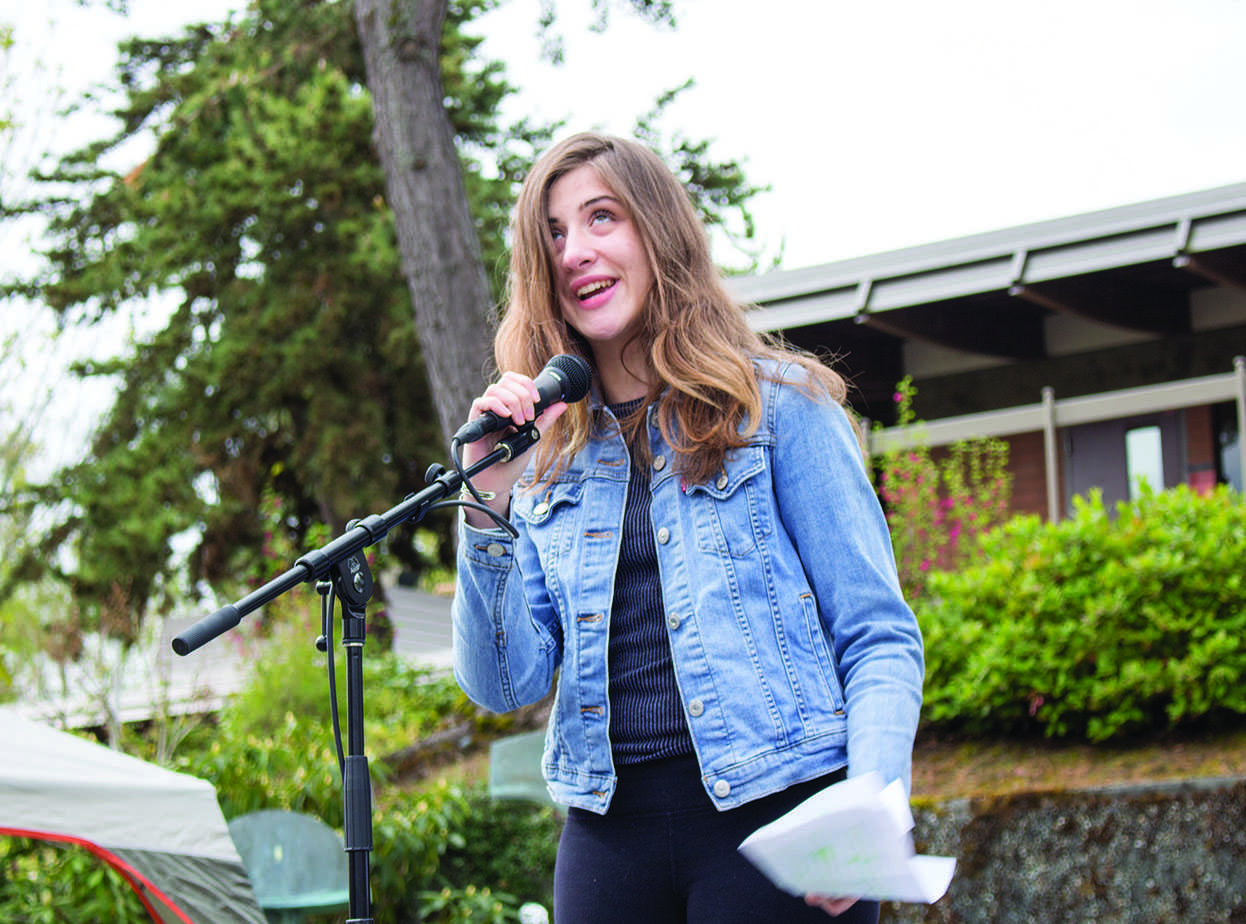 Rachel Lough is a student at SCC that was a high-school dropout, lacking direction and in an abusive relationship. She turned her life around using the resources this school provided and now has a two-year degree. “SCC has given me the opportunity to be reborn into someone who craves knowledge, who is ecstatic to be here — and I’m grateful I was given the chance to meet her.” 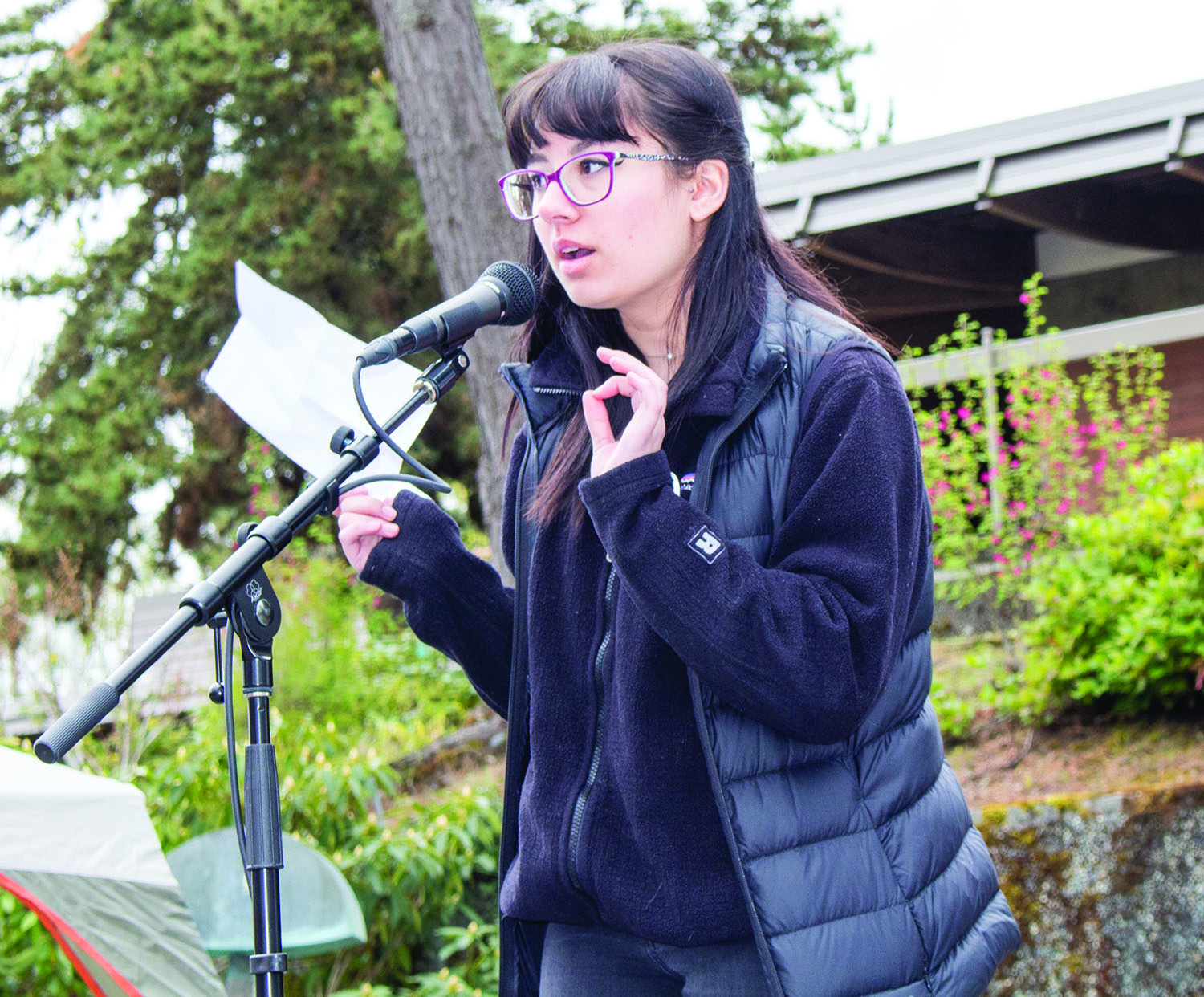 Tamiya Capewell is an SCC Honors Student and this was her first experience in an American school. The kindness and availability of faculty and resources helped her find her path to becoming a teacher. “Honors college has helped me immensely on my journey, I’ve received so much support and guidance from many of my professors and academic advisors.” 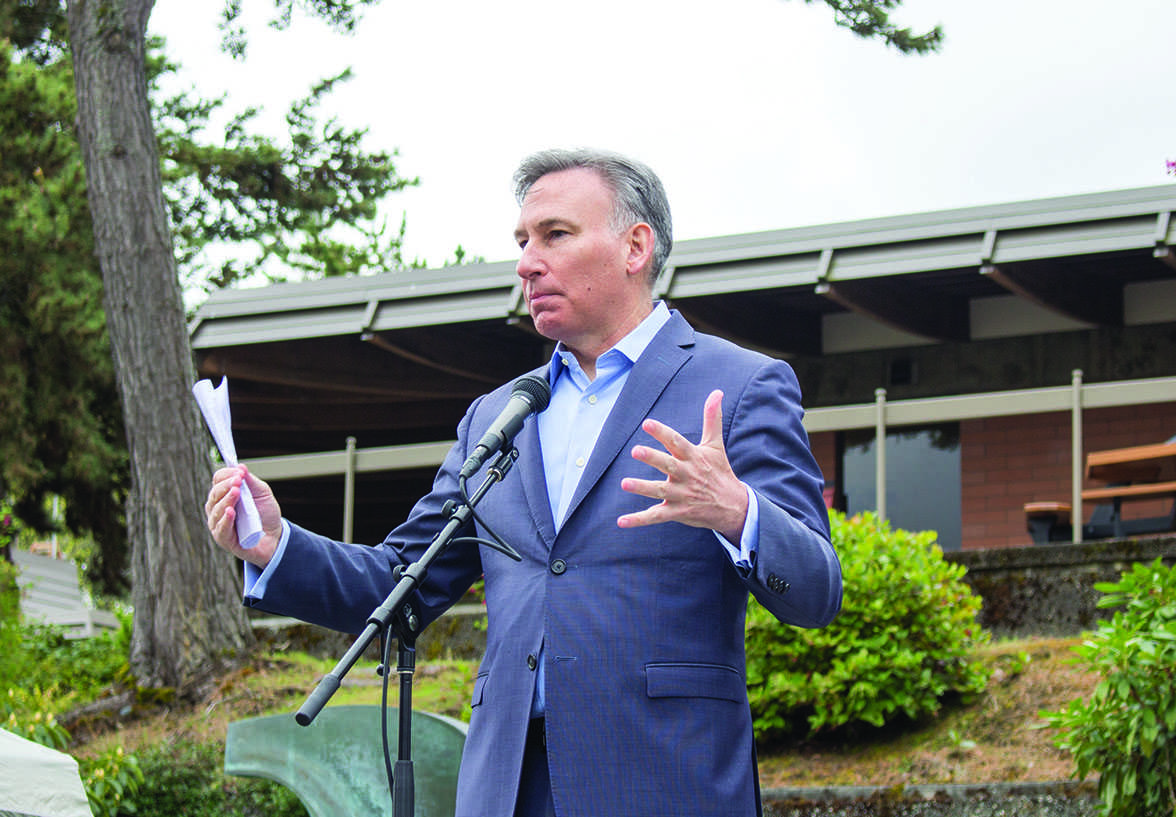 Dow Constantine is a King County Executive who watched his father struggle financially as a community college professor and spoke about the inexcusable shortcomings of Washington state’s higher education funding and tax laws. “This state has the most upside-down tax system in the nation. We have 49 models of taxation we could follow that would be more progressive than the one we have chosen.” “You are the vanguard, you are sending the message — keep doing it. We’re going to keep up this fight until we get community and technical colleges funded and you appropriately compensated”

Ernest Johnson is a tenured SCC professor with 22 years experience and a doctorate under his belt. He said his salary would be 30 percent higher if he worked at a public school. Lovejoy compared her wages and found she could be making nearly 50% more working at a high school.

A number of other professors have reported similar wage disparities between CTC professors and K-12 teachers.

SCC Professor Elizabeth Hanson spoke of 700 tax breaks that Washington state legislatures have granted to the richest people and corporations in our state. She claims this is a loss of ten billion dollars in revenue per year. Another notable tax break in 1996 was Senate Bill 5286 — a tax break for intangible property that lost state revenue four billion dollars a year.

Finally, the 2013 Boeing tax break: “The largest tax break given to a corporation in the history of the United States. A nine billion dollar tax break over 16 years,” Hanson said. This accounts for a loss of half a million dollars of revenue per year.

Tuition Costs in the past 50 years

A 450 percent tuition increase has occurred at CTCs in the past 40 years. John Burbank the Executive Director at the Economic Opportunity Institute compared these numbers in his speech. He went to Evergreen State college in 1970 and paid 1,500 a year, in today’s dollars, because of proper state funded community colleges.

Over 100 people marched from SCC’s campus to 160th and Aurora Avenue Chanting and waving signs. A banner was draped across the walking bridge on 160th reading “[Re]Invest In Our Colleges.” Several drivers honked and waved in solidarity.

What can be done

The American Teaching Federation has a “reinvest in our colleges” proposal that would establish a minimum counselor to student ratio, enhance professional development funding, raise the pay for all college employees to a livable wage, fund equity and diversity and inclusion and fund premium pay for faculty who are teaching incarcerated students.

The cost for all of this would be 250 million dollars a year. You can find and email your legislator asking them to fund CTCs at https://app.leg.wa.gov/districtfinder.

Adjunct professors are part time employees that usually teach at several different colleges and/or work part time in other jobs to make up for low salaries. They are often hired with little to no guidance or training of any kind. Keep in mind that some of these professors spent enough time in school to earn a doctorate and still don’t receive job security or benefits.

Traveling between schools and jobs leaves little time for office hours to help students. Adjunct professors make up two thirds, or 70 percent, of faculty at SCC.

SCC Safety and Security was aware of the planned rally in advance and did not increase presence on campus for the event, according to Calob Peoples, an officer in the department.

“We don’t expect any problems,” he said.

Despite that expectation, a Safety and Security vehicle accompanied the protesters as they marched down 160th Street.

Shoreline Police received multiple calls about the march on Aurora Avenue from drivers concerned about protestors potentially walking into traffic, according to Ryan Abbott, the Public Informations Officer for the King County Sheriff’s office. A police officer was dispatched to speak with march organizers about these concerns.

“There were absolutely no issues with that, so we left,” Abbott said.