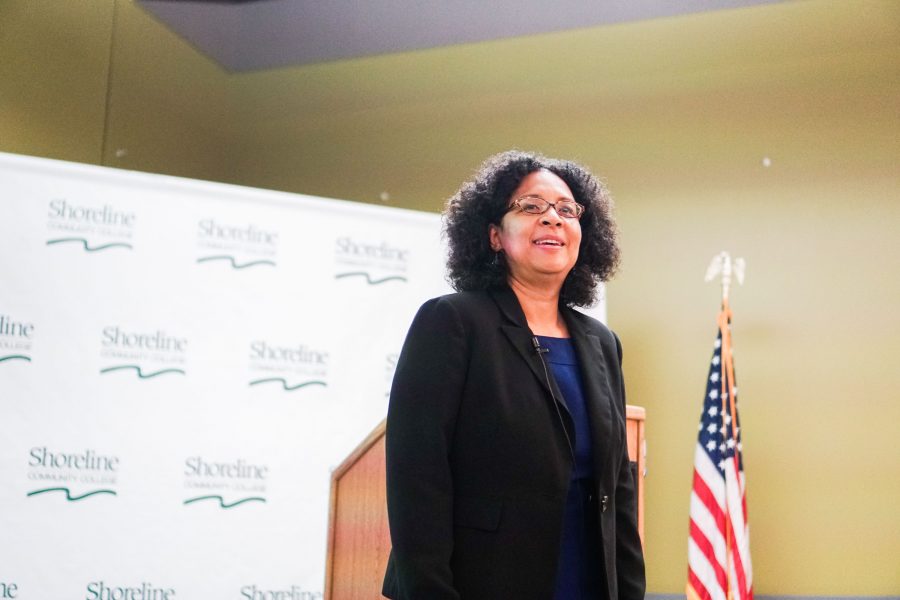 The mayor of Tacoma, who is certainly not the tallest mayor in Washington, looked her podium up and down, and smiled.

“The world is made for men who are six feet tall,” she declared, and her audience of SCC students and faculty laughed. She elected to stand in front of the podium addressing the crowd without a height barrier.

On Oct. 19, Mayor Marilyn Strickland of Tacoma came to SCC’s PUB for the GAC event “Local Action and Global Impact.”

Her focus, as a politician, is to “think globally, and act locally.”

This term is often used to refer to climate change, especially with President Trump’s disregard of the Paris Climate Accord.

There have been 382 mayors across the U.S. who have decided to act in accordance with the accord, with or without the president’s help.

Strickland, however, doesn’t believe thinking globally and acting locally has to stop there. According to her, we as a country have been waiting over 20 years for comprehensive immigration reform to come out of Congress, but it wasn’t achieved when Democrats were in power, or Republicans.

“We can’t change federal policy, because that’s beyond our control, but we can at least, as local communities, decide how we want to welcome immigrants to our communities,” she said. Tacoma was, according to Strickland, the first city on the west coast to be a “welcoming city.” Their police officers don’t check the immigration status of people they arrest; when someone commits a crime, they’re treated like anyone else, regardless of their status.

In 2015, Tacoma launched Project PEACE, which stands for Partnering for Equity and Community Engagement. Among other things, this involves police officers in Tacoma undergoing voluntary unconscious bias training, and community talks, where citizens and police officers sit down and discuss encounters residents have had with police. According to Strickland, “Ferguson can happen in any city in the USA if those relationships don’t exist.”

Strickland believes that people want to live in cities that are immigration friendly. The mayor has advice for
those who want to act locally.
• Be well read in international affairs
• Pay attention to where articles on social media are coming from
• Do your research for yourself
• Don’t get caught up in confirmation bias (the tendency to interpret new evidence as confirmation of one’s existing beliefs or theories)

“We have a (presidential) administration right now that thinks that xenophobia and isolationism is a good strategy,” Strickland said. “We can put America first, and not isolate ourselves from the rest of the world.” She believes the idea of being isolationist is un-American.

According to Strickland, “For a long time, rightfully so, students have been very bored, and not interested in government, but I think you’re starting to see more young people become more active, and to participate in the process, and run for office.”

Strickland added that sometimes, people think they need to have a certain resume, or set of experiences to run for office.

“Start as a parks commissioner,” the mayor instructed. “Start on the school board, work your way up, or even run for city council. It’s been done.” She encourages young people not to feel as if they need permission to lead.