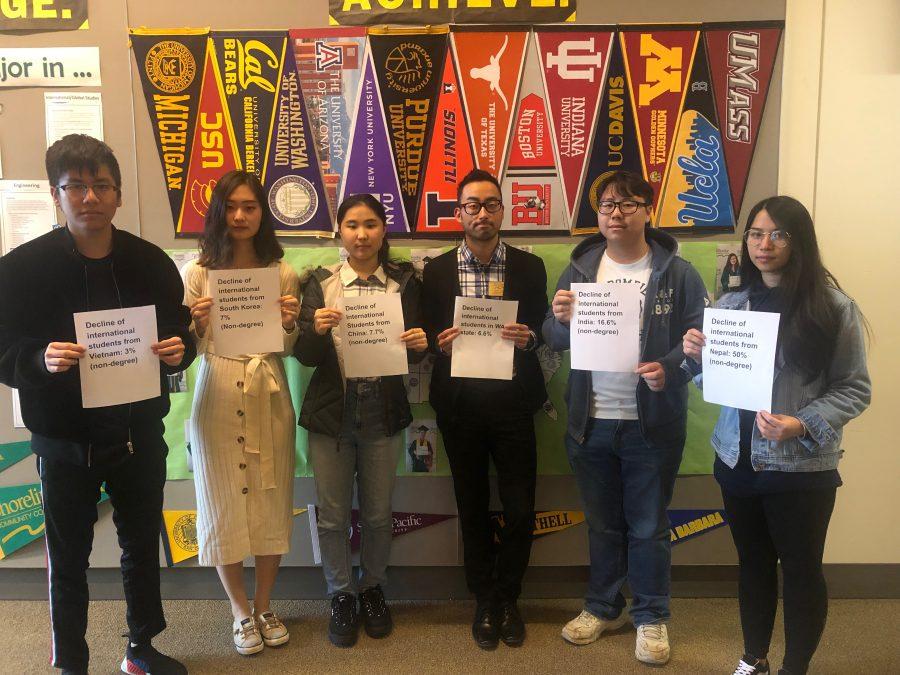 Owing to its high-quality education system, diverse culture and relatively open labor market, the United States has always been one of the top destinations for international students.

The U.S. hosts the most international students of any country worldwide.

However, the number of international students has now faced its first decline after 16 continuous years of growth. According to the U.S. government’s Student and Exchange Visitor Information System, new international student enrollment dropped by 6.9 percent in the of fall 2017.

This phenomenon is also affecting SCC. Rylan Good, one of the associate directors for SCC’s International Outreach, said that the percentage of new international students dropped between 6-7 percent this year.

“When the government says certain things that make international students feel that the United States is no longer welcoming, it makes the U.S. a less appealing destination,” Good said.

Also, Good said that more and more parents and students are worried about the rising number of violent incidents in the country. As the number of mass shooting cases rises, the country’s failure to reform gun control became one of the major safety concerns for potential new international students.

Moreover, Good said that countries such as Singapore, the United Kingdom and Australia have been starting to recruit international students. Since these countries are allowing international students to work part-time off-campus, this has become a major attraction for ones who don’t have enough money but still want the experience of studying abroad.

Most U.S. higher education institutions largely blame the decrease of international students on the anti-immigration policies followed by the Trump administration.

One example is the travel ban that Trump has enforced. The travel ban automatically rejects the issuance of U.S. immigrant and nonimmigrant visas to applicants from Libya, Iran, Somalia, Syria, Yemen, North Korea and Venezuela, which has been interpreted as a racist policy by United Nations Human Rights experts.

Although there is an exception for student visas, the students still have to go through an intensive background check that lasts mostly for months when they apply. Even when they successfully obtain one, there is still a big chance that they still get questioned when they arrive at the U.S. border.

However, Good is still optimistic about the future of SCC’s International Department. “International education is like a roller coaster,” Good said. “There will be highs and lows, but as long as we try to do our best even when we are in our lows, by the time the roller coaster starts going up, we’ll do better than the schools that already gave up on their International Education departments.”

Also, the international education marketing team also want to emphasize the success stories of alumni. “SCC students are extremely successful after they graduate. Many of them get into prestigious universities and eventually get jobs in the U.S.,” Good said.

Good said that the outreach team started to heavily highlight the use of social media marketing. They want students to feel welcomed here by seeing photos or videos of students that are similar to them regardless of their nationality or race.

The SCC International Education office has a strategy to tackle the decline. “We started to choose countries that we travel to more strategically, we want to build a deeper relationship with those countries,” Good said. “We also give more help to prospective students that are preparing for visa interviews, so that the students would be more confident and know what they should say while having an interview.”