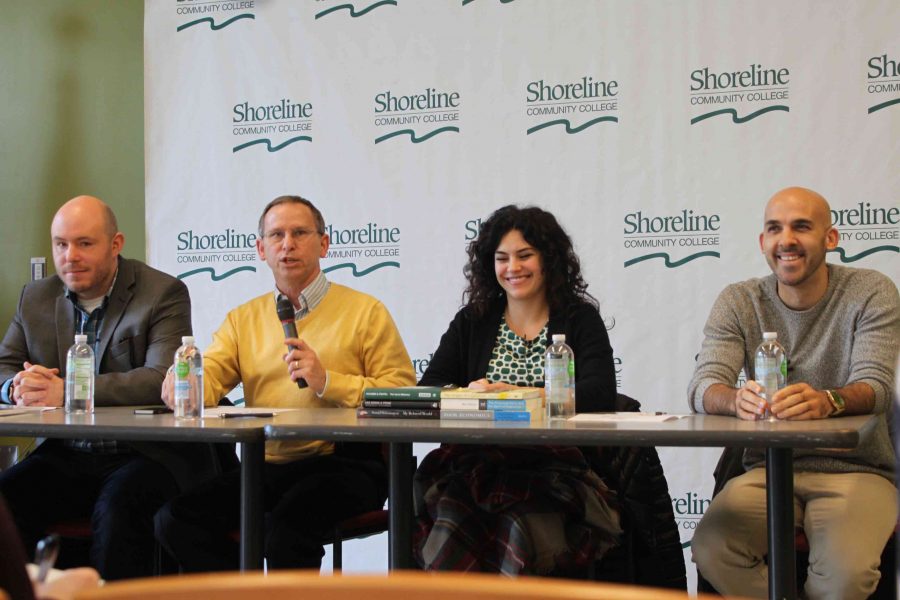 “What are you gonna do with an International Studies degree, huh, punk?”

This question — perhaps not verbatim — plagued three SCC graduates when they were students at SCC. They answered this question at the “Ah-Ha Moments” panel in the PUB on Feb. 23, an event headed by Larry Fuell, director of the Global Affairs Center.

These SCC alumni went on to the University of Washington Jackson School of International Studies, joining the ranks of the one-third of SCC graduates to go on to four-year universities.

Alexis Chouery didn’t always know exactly what she wanted out of her college experience. She studied engineering for two years, but dropped it because it wasn’t engaging enough. When she joined the World Philosophers and Dismal Scientists Society, her confidence was boosted.

In her experience in International Studies, Chouery was instructed to study a topic many young Americans didn’t direct special attention to until much later. Chouery believes she was “fortunate enough to be forced into (studying) the Syrian dilemma right after the red line (Syrian president Bashar al Assad killing his own people with chemical weapons) was crossed.”

Her experience at SCC gave her a leg up, with small class sizes and lots of interaction with professors. She works for the F5 Network, an app-making company, and is now serving as the Co-Vice President of the Young Professionals International Network, which hosts networking and social events in and near Seattle with an international focus to foster global collaboration.

During his time at SCC, Ian Waller served as the Administer of Social Justice in the Associated Student Government, and he organized talks for the Global Affairs Center similar to the “Ah-Ha Moments” talk. The difference between the UW and SCC, according to Waller, is that “they engage you at SCC. At UW, you’re a number.”

Going to Jackson, according Waller, was smooth sailing compared to Shoreline.

“Even though it’s a community college, it’s rigorous,” he said.

Waller advises SCC students to follow their interests, despite what others say. When asked what he intended to do with his International Studies degree, Waller said what the person asking really meant was, “Are you gonna be poor?” From the beginning, Waller has never pursued his studies for a check.

Choosing the right college does not always have to be an arduous process. For Simon Walker, he chose SCC because “it had a halfway decent soccer team.” This, however, wasn’t SCC’s only draw for Walker.

“Without Shoreline, I probably never would’ve gone to Jackson,” Walker said. At the UW, Walker wrote for the Jackson School Journal and studied forced migrations. He currently works for Seattle’s chapter of GenR, raising awareness for the International Rescue Committee, one of the world’s largest aide organizations.

Chouery, Walker and Waller have joined, lead and organized clubs; taken internships and networked their way into positions many students at SCC don’t believe are feasible for them. Many experiences these SCC alumni had are available to current students.

The Global Affairs Center has several events planned in the coming months: from 7 – 8:30 p.m. on March 7, there will be a talk on “North America in the 21st century: A Mexican Perspective.” The talk will be in the PUB, Room 9208.