SCC Announces Budget Cuts, Layoffs at Board of Trustees Meeting 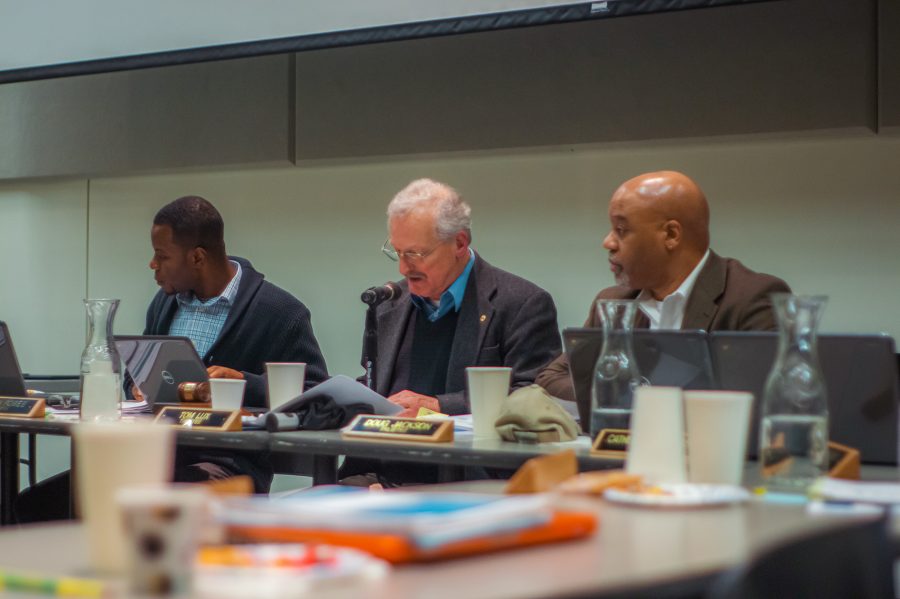 SCC’s Board of Trustees expressed regret over layoffs at their Jan 22 meeting. (Photo by Lance Allegro / The Ebbtide)

SCC’s budget review process is almost over, and the administration has announced a total of $2.38 million proposed budget reductions.

The $2.38 million figure exceeds the $1.9 million touted by the administration late last year, which they attribute to an even further decline in enrollment.

The majority of the proposed cuts come from reductions in full-time and part-time faculty positions, classified staff and executive positions.

The Board of Trustees (BOT) approved the administration’s recommendation to cut a full-time faculty position from the engineering program, citing a steep decline in enrollment in said program as the rationale behind their decision. Classified staff and administrative staff will lose three and five positions, respectively. Currently, there are nine vacant classified staff positions, and one vacant position in administrative staff.

Financially speaking, the cuts to part-time, full-time, classified staff and executive positions constitutes about $1.1 million of the $2.3 million in reductions that the administration is proposing.

The rest of the cuts come in the shape of reductions in areas like utilities, travel, and training for staff.

At the Jan. 22 BOT meeting, both the BOT and SCC President Cheryl Roberts faced criticism from union representatives and the general public.

Erik Hamako, SCC Federation of Teachers President and Paúl Fernández, Washington Federation of State Workers Chief Shop Steward for SCC demonstrated their concerns to the BOT and administration, again pleading for more transparency and for the board to hold off on reductions.

“Decreasing enrollment does not explain the deficit spending,” Fader said about SCC’s declining net position for the last six years. “The rate of overspending increased for each of the five years before the drop in enrollment.”

[ads_color_box color_background=”#eeeeee” color_text=”#444″]SCC’s dental hygiene program is also in danger of being cut due to various other factors. Read our coverage here.[/ads_color_box]