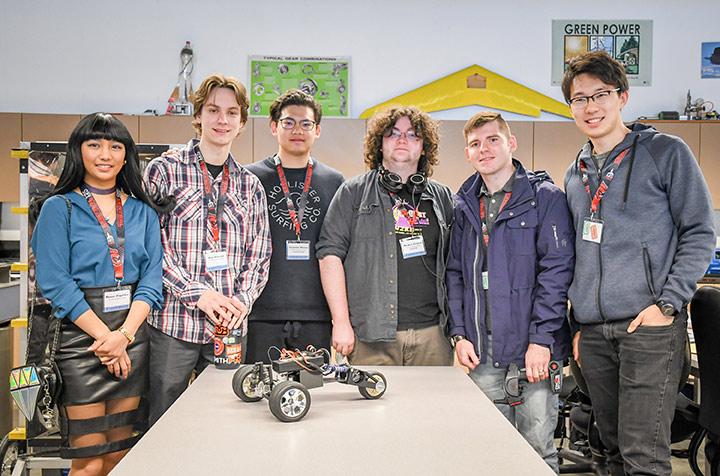 SCC’s Engineering Club received multiple awards after competing at this year’s Pacific Northwest Engineering Student Design Conference.
The annual conference is hosted by a different school every year and is meant to bring together students from 4-year and 2-year colleges to compete in various competitions and show off their engineering prowess.

This year’s conference was held at Central Washington University on April 28, and the competitions included the RC (remote control) Baja Car competition, in which students pitted their self-designed and self-built RC cars against each other; the SumoBot Competition, where compact, autonomous robots tried to push an opponent robot out of a ring; and the Old Guard Student Oral Presentation, where student presenters had to “address a technical, economic or environmental aspect of engineering,” according to the website for the American Society of Mechanical Engineers (ASME), the conference’s annual sponsors.

But it wasn’t from lack of effort.

SCC’s RC car was the result of months of work, according to Engineering Club President Robert Moore — the project was started back in November and, even then, Moore admitted they could have started earlier.

“The competition was actually our first real test of the car,” he said. “We were a little nervous.”

The group found themselves still making last minute touches on the day before the conference, but they managed to persevere despite complications like lack of funds, shrinking 3D parts and an overheating motor which, according to club member Eric Siverson, “almost melted our car.”

All in all, the club members agreed it was a valuable experience.

“We got to see the campus, we got to talk to people from Central Washington, we had a long conversation with a professor from Eastern who was supervising that group. … I have contacts now basically,” Secretary Decker Eveleth said.

Others agreed with Eveleth on the value of being able to network at the conference.

“Contacts are a very important thing in the engineering field, so I know a lot of people now through that conference that I can email and keep in touch with for future job purposes and stuff like that,” Siverson said.

The group also learned a lot through the process of completing their various projects.

“It gave me a lot more practice with project management — trying to lead the remote control car project, constantly texting people to make sure (things) were going to work out,” Moore said.

Now that their main competition of the year is over, the Engineering Club students are looking toward the future. With several of the club’s core members graduating, some of them are hoping impress upon other students the importance of having the hands-on experience gained through participating in the club.

“In class, we can only learn theorems or how to do stuff, but in the club, we can actually know how tough it is to make a project from zero to 100,” club member Hsuan-Yu Huang said.

Huang and Vice President Haoran Zhou both expressed their want for other engineering students to recognize the value of project experience, instead of focusing solely on coursework and high GPAs.

“Being a student is a really short period in a person’s whole life, and if a person is really ambitious and wants to be really significant or revolutionary, (they have) to do some experiments to find (their) passion,” Zhou said. “That innovation is the power in the engineering field.

“Engineering is defined to solve real world problems and to make the world a better place, so (we can’t) only focus on the course materials.”

And if all that isn’t enough to get students to join the club, Zhou had just one more thing to add.

“Engineers will rule the world in the future,” he said with a laugh.