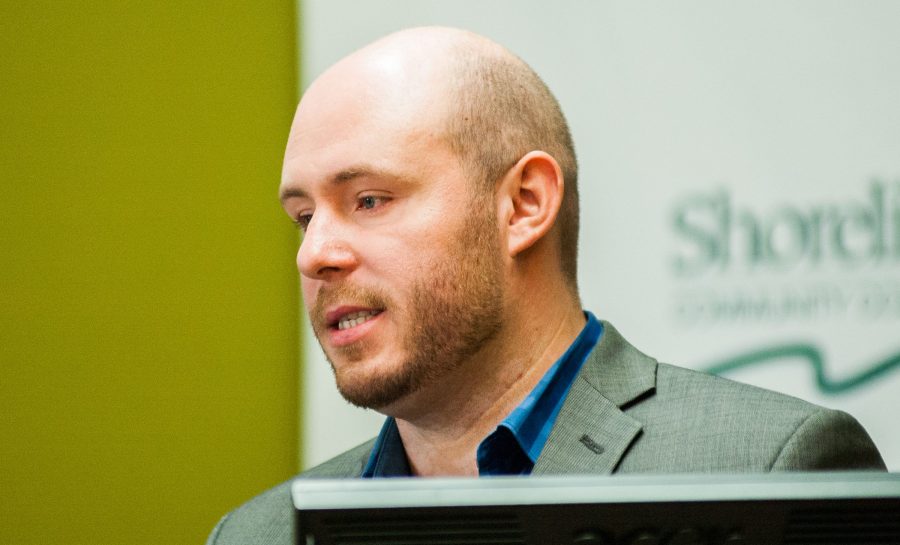 Less than one percent of refugees are settled in a third country.

The first being the country they fled, the second, the country they’re living in which they stay in refugee camps, with the third being a safe place to rebuild their lives. Most of those settled are women and children.

Simon Walker is president of GenR, which stands for Generation Rescue, an organization that describes itself as a group of young, influential humanitarians partnered with the IRC. They support the IRC through fundraising, educational and networking activities.

Founded at the behest of Albert Einstein, the International Rescue Committee (IRC) is a humanitarian aid organization that provides both emergency assistance and long-term assistance to people displaced by war, persecution and natural disaster.

Walker came to SCC on Oct. 25 to discuss his work with these organizations. His GAC event was in the Quiet Dining Room.

Refugees and immigrants are different, Walker explained, because a refugee fears persecution for one or more of five reasons: race, religion, nationality, social group or political opinion. The IRC assists asylum seekers in proving to the government that they are in danger because of one of these five reasons, so they can have a chance of being resettled.

When a refugee family is flown to the U.S., the IRC meets them at the airport. Oftentimes, Walker said, the only thing refugees will have seen of America at that point is what is on the news. By meeting them at the airport, they want to show these families that they are welcome here.

The IRC then takes them to their fully furnished apartment, which Walker says can be emotional for families. Some have lived in refugee camp tents for more than a generation.

Once they are moved, they can attend IRC workshops, for resume building, interviewing and even use of the website Linkedin, which Walker joked he “could probably use too.”

Refugees are given a case manager by the U.S. government, Walker explained. They assist the refugees for six months, and then stop completely.

“IRC picks up the slack in that area,” Walker said. This includes job training, ESL training, funding and medical help.

“Once you become a client of the IRC … from beginning to end, until you get U.S. citizenship, the IRC is right there with you,” Walker said. This process can take years.

A lot of the fearful rhetoric on immigration is ridiculous, according to Walker. In his work with GenR, he wants to combat that. Though, if he were given the option to enact change from a more powerful position, he would take it.

If Walker were to wake up one day in the Oval Office, his first action would be to increase resettlement numbers for refugees. Walker believes having so few refugees resettled is horrible for foreign policy.

America is a country of immigrants. And refugees need more help than we’re giving them—beginning to end.

“We can’t allow our western allies to shoulder that burden.”