Reflections of a Mentee 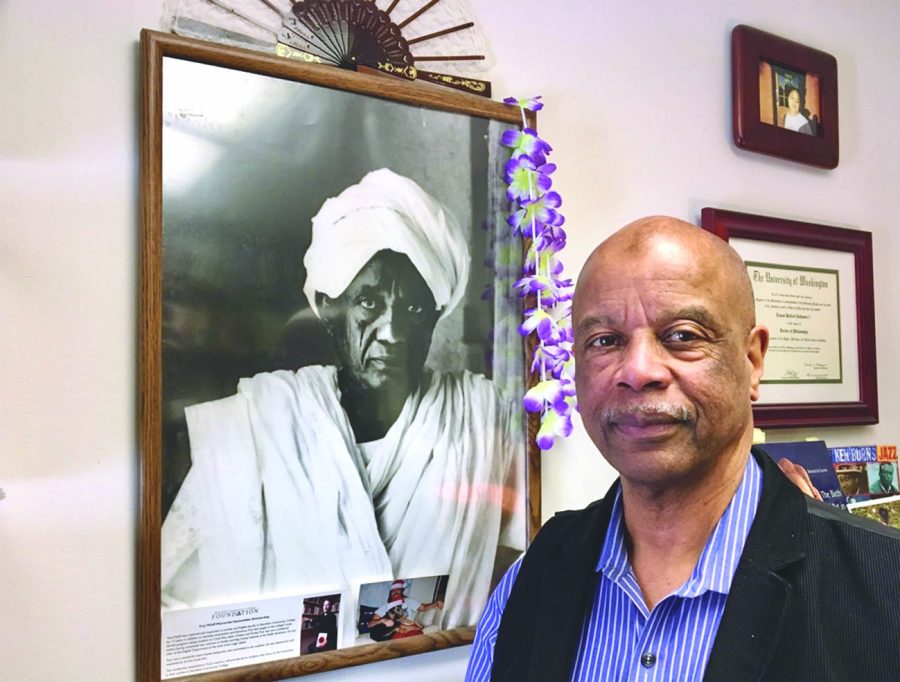 Hollywood producers have taken an interest in making a movie about Mahmoud Muhammad Taha, Sudanese religious and political leader, through the eyes of SCC professor Ernest Johnson.

Johnson lived in Sudan for nine years under Taha’s tutelage until Taha was executed by the Sudanese government for alleged apostasy (renouncement of one’s faith, in his case Islam) in 1985.

During his time in Sudan, Johnson followed Taha’s regime and way of life, bearing witness to Taha’s struggle to achieve equality and prosperity in Sudan.

Taha was born in 1909 in Rufa’a, a small town in central Sudan. He was the founder of the Sudanese Republican Party, which was known for its progressive ideals and rejection of violence — all stemming from Taha’s teachings.

Johnson first met Taha in 1977 at the age of 24. After embracing Islam while working for the University of Hawaii, Johnson traveled to Sudan after meeting several Sudanese nationals who happened to be studying at the same university.

Within two weeks of being in Sudan, Johnson met Taha: “As soon as I met him I was hooked. He had a powerful presence, he was very humble, very engaging.

“I’d talked to a lot of people and none were as clear as he was, nor did they speak as freely and clearly about difficult topics,” Johnson said.

Johnson began teaching English classes in Sudanese high schools. After some time, he began attending the University of Khartoum to obtain his master’s degree in linguistics, all the while teaching English as a Second Language classes at that same university.

One of Johnson’s clearest recollections of his time with Taha was during a chant session: a group activity where Taha’s followers formed a circle and chanted prayers while Taha stood in the middle. Johnson used to lead the chants, which meant he stood in a line inside the circle alongside Taha.

In this particular chant session, Johnson was the closest person to Taha. Suddenly, a stranger broke into the circle with his hand in his robes and stood next to Taha.

Johnson recalled how tense he was while watching this, thinking that if the man pulled something out of his pocket, he’d have to act. It wasn’t until later that Johnson realized that his mentor didn’t need his protection. Taha’s faith was so strong that “He didn’t have to worry about men,” according to Johnson.

Johnson attended the first set of hearings against his former mentor in 1985. Taha had been a strong critic of Gaafar Nimeiry’s government, which led to Nimeiry silencing him through charges of apostasy. Johnson was unable to attend the second portion of the trial and did not witness Taha’s execution.

In retrospect, Johnson added the following: “When I found Ustadh (teacher) Taha, I found what I was looking for, really.

“I didn’t know what I was looking for, but I found it.”

Taha’s story has garnered quite a bit of interest in Hollywood. Last November, Johnson, along with others close to Taha, met with Hollywood producers, directors, photographers and other interested parties in Los Angeles.

The director of 2004’s “Crash,” Paul Haggis, one of the many who are interested. Johnson also said that a meeting with the others close to Taha happened with people from Forest Whitaker’s production company: “That’s the level of the conversations happening right now.”

As for the proposed format of the film, Johnson says that the producers have told him they want to tell the movie through his eyes, centering the plot around the nine years Johnson spent in Sudan. He recognizes that they see him as an “in” to hook Western audiences.

Johnson highlights David Hinckley, former director of Amnesty International, as one of the main driving forces behind the efforts to make this movie. “(Hinckley) was involved in trying to prevent my teacher’s execution in 1985,” he said. “He’s the one really pushing this movie.”

While the story would be told through his own experiences, Johnson recognizes that the importance of the movie lies elsewhere. “I would like to be reflected properly, but that shouldn’t be as important as reflecting Taha properly,” Johnson said.

Johnson thinks the movie will “lead to something major.” He hopes this movie will open the door for other things to happen and pave the way for Taha to be recognized on a larger scale. “I’m convinced that word of Taha’s story will come out,” he said.