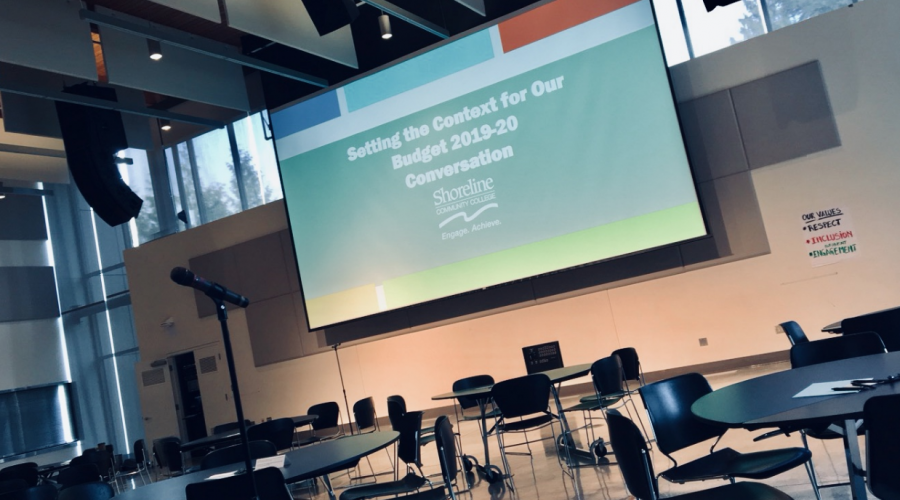 SCC officials recently held a meeting and an open forum in order to address the school’s budget and uphold transparency with its faculty and employees. SCC President Cheryl Roberts, acting Vice-President of Student Learning Bayta Maring, and Chief Financial Officer and Senior Executive Director Stuart Trippel were among the administrators to answer questions.

The meeting began with Gloria Ngezaho, executive director for employee engagement, equity and organizational development, explaining the dynamics of the meeting and reminding all attendants that “We’re all here as a team.”

In response, Roberts said, “Today we’re here to share what we know, and as the president I’d like to be able to say we have all the facts.”

Roberts cited steady declines in international student enrollment and issues with the legislature accepting tuition rates staying the same, but did not state that SCC itself was a reason for the budget shortfall.

Maring proceeded to show graphs describing the decline in international student enrollment since last fall, with decline in enrollment evident in areas like math and English as a Second Language courses, as well as the general decline of students enrolling in face-to-face classes.

After Maring, Trippel gave a rundown of SCC’s Commitments budget, a figure that amounts to $26.5 million. This fund is mostly composed of board reserves, student activities and dedicated fees (course fees, student technology fees, etc.) amongst other costs.

The last 35 minutes of the meeting were dedicated to questions posed by faculty and employees.

DuValle Daniel, president of the Shoreline Community College Federation of Teachers, was the first to raise a question. She asked for a better understanding of the causes that led to the budget shortfall.

“I want more information about how we got here,” she said.

Trippel took Daniel’s question by pointing to dropping enrollment rates (especially among international students) and to compensation adjustments that weren’t funded by the legislature.

Professor Tasleem Qaasim of the education program asked about the “big drop” in the cash balance in 2017-18. Trippel pointed to expenditures for the student housing development and retroactive salary payments for faculty.

After various comments from faculty, Daniel stood up to question Trippel again, asking whether any of the budgets they had been shown so far were anything but preliminary. “I’m not sure I see where the original budget is,” she said.

Trippel responded to the first question, saying “The budget that we sent out in (Roberts’) email early last week is the budget we’re comparing to.” Trippel was referring to an email sent by Roberts to faculty, which included links to SCC’s allocation model overview, the budget principles, expenses and revenues, and salaries and benefits.

Maring answered the enrollment question, saying that one of the potential causes for the decline in math placement could be due to the new test method, the ALEKS online platform, which adds an extra step before registering for classes. However, Maring also admitted that knowing student intent “is really hard.”

“I wish we had more data on students who decided not to enroll,” she said. “But to be honest, I don’t know.” Maring pledged to “try to figure out” why enrollment is dropping.

Qaasim asked whether it was possible to have the whole budget balance projected on screen, and the total balance of the tuition. She also asked for clarification, equating the lack of questions from faculty to a lack of clarity.

Trippel said that they had that information, referring to Qaasim’s request for the whole budget, but they “can’t get it here now.”

Qaasim said: “So you have the information on the total amount — the total balance — but you don’t have it here, at a budget meeting that you called all of us to? What’s the reason for that, because that makes no sense. Why can’t we see the balance of the budget and the balance of the tuition?”

Daniel had the last shot at the mic during the meeting. “Why were we invited here and given insufficient information to make comments and suggestions?” she said. “You said that our questions would be answered.”

Daniel’s question prompted sparse applause from the faculty in attendance.

Trippel stood up to answer Daniel. “It certainly wasn’t our intent to provide you with insufficient information,” he said. “We provided the information that we thought would be helpful in as simple a manner as we could.”

Unfortunately, student engagement in the meeting was limited to a small group of students surrounding the entrance of the dining room, who didn’t get involved in the questioning. Qaasim is convinced that students should “ask more critical questions and be more involved” when it comes to SCC’s finances.