Getting Down with the Delegates – My Time with the Model UN 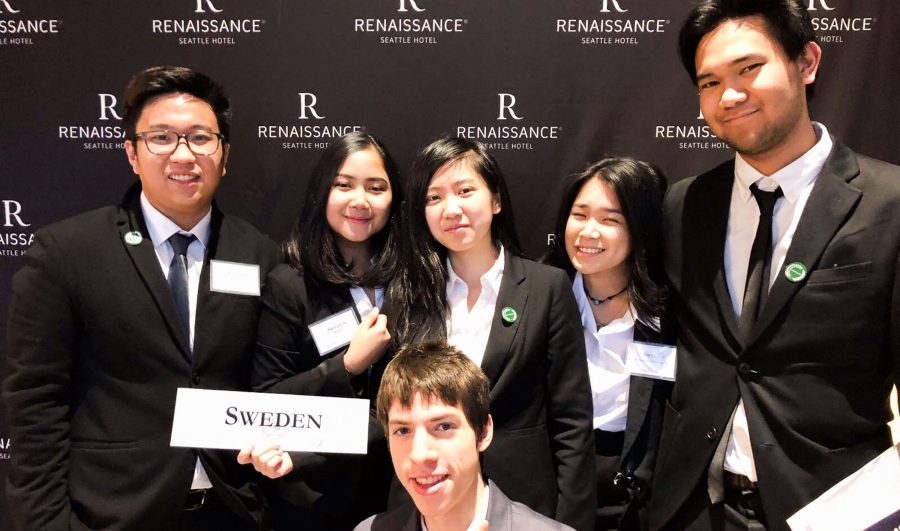 Have you ever imagined you could be selected as a delegate from your country and sent to a United Nations conference to solve any global issue?

No? Neither had I, nor had anyone from the SCC Public Speaking Leadership Club.

The Public Speaking Leadership Club made their first appearance in the Northwest Model United Nations (NWMUN) on Nov. 17-19.

Model UN (MUN) is when students role-play as delegates to the United Nations and simulate UN committees. And last month, I did just that at a three-day conference with the other club members, Annabel Lee, Thania Winanta, Nicholas Haryono, Sesario Hiroyuki and Rouen de la O.

It all started when the Public Speaking Leadership Club’s president, Annabel Lee, encouraged members to join the NWMUN. At first I joined thinking that maybe this would be an interesting competition. But I didn’t
expect to be so stressed in the middle of the preparations because it was so freaking complicated and difficult.

The phrase “The best things never come easy” always popped in my head whenever I felt tired preparing for
NWMUN.

After a month of preparations, the day finally arrived. I entered the conference room with excitement jolting up my body. I could sense that everyone was pretty nervous and excited at the same time.

During the opening ceremony, I felt anxious and clueless because I did not know what to speak about or do later in the conference. Then I was separated from my team members because we each had to go to our committees’ conference rooms.

I walked into the room and sat down in the back, knowing that I would not talk a lot during the conference. Luckily, I sat with three nice people who would end up accompanying me throughout the conference.

On the first day, all delegates were assigned to make a resolution paper by the end of the weekend. Also known as a working paper, it’s a proposal of actions for reducing the conference’s particular world problem. To be honest, I was afraid that I couldn’t participate because I didn’t know how to write a resolution paper.

But it turned out that everyone in the room worked to finish the paper together. From that moment, I saw how everyone helped each other, and it pushed me to help too. We decided to divide ourselves into five small groups to write the paper, and we had a plan to merge all those papers at the end of the conference. Then afterwards, we would hand in the completed paper to the judges.

On the first night, I tried my best to contribute to the paper. It was so hard for me to write one resolution that it took me thirty minutes to structure the “resolution” sentence in my mind.

On the second day, we had to attend the same committee for 11 hours. Can you imagine what my butt looks like after the conference? Yes, pretty flat.

Later in the afternoon, we did a little debate session, and I challenged myself to give a one-minute speech. Since most of the people were doing a speech, I felt like I needed to do it too.

It was a long day but I definitely gained tons of new experiences.

And finally, it was the last day, the day I didn’t think would happen because I thought I wouldn’t survive the conference. We still had the committees for six hours before the closing ceremony, and everyone was exhausted, but we tried to keep up our spirits for the sake of our resolution paper.

After a bunch of revisions and edits, we ultimately merged our working papers and submitted the final paper to the judges. At the end of the conference, our working paper was approved and, in that moment, I found myself beyond happy, no kidding.

I was happy because I didn’t even think I could contribute and help all the delegates to write something called a “real world scenario” resolution paper, as it was all new for me.

“The best things never come easy” emerged again in my mind when I was walking out from the conference room. I can’t lie — I never regretted saying yes to the MUN.

The conference taught me to be brave and how to gain insight about world issues. The other delegates taught me to think outside the box. The working paper taught me to take tons of edits and rejections as important steps for getting the best result.

This conference was definitely a life-changing experience. Even though I came home without a win, I’ll still be holding tons of new experiences.

You can come to the Public Speaking Club meeting every Monday at 2.30-3.30 p.m at room 1530 to learn more about our future club events or competitions.