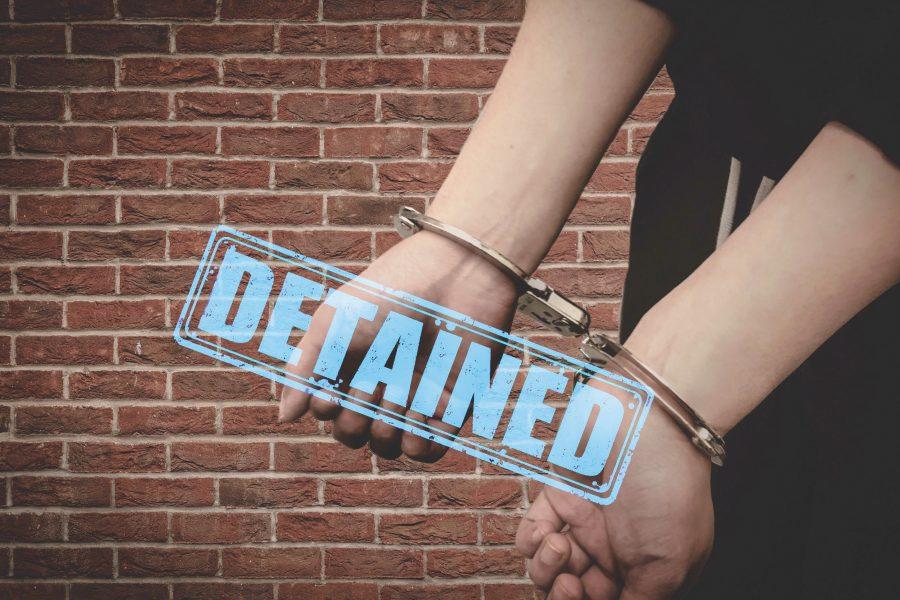 When international student Jungeun “Rachel” Kim re-entered the U.S. from Canada in January, she had what she thought was an easy mission: to get her student status renewed. However, the mission turned out to be anything but easy, and it led to 10 days in detention.
Disclaimer: The information provided below is all general immigration information. As each case is unique, we do not suggest students use it to make any decisions. Students who have questions on their immigration status, or think they may have failed to maintain their status, should always talk with an F-1 specialist before they make a decision. (Courtesy of the SCC International Admissions & Student Services.)
Kim, a 20-year-old from South Korea, was arrested while attempting to re-enter the U.S. border to regain her I-20 status on Jan. 15, 2018.

She was detained at the border for 10 days and was released without a reason given after the news media contacted the U.S. Immigration and Customs Enforcement (ICE).

Kim started studying at Green River College in March 2015 with a student visa, and transferred to SCC in Fall 2016, intending to major in International Business.

According to the SCC’s website, international students obtain a document called I-20, which proves the student’s F-1 immigration status as full-time students, when they have been accepted to attend the college. A valid I-20 form indicates a period the student is allowed to study in the U.S., and Kim’s expired on Dec. 31, 2017.

Kim didn’t realize this until she returned to Seattle from her vacation at the beginning of January.

F-1 students can choose either rein-statement, which generally takes five months for the U.S. Citizenship and Immigration Services (USCIS) to review the application, or re-entry with a new I-20 issued by the school, according to Lianne Almughirah, the director of International Admissions & Student Services at SCC.

When returning to the U.S. by land, students just need to get a paper I-94, the Arrival- Departure Record Card, from the Secondary Inspection Office as a proof to the school that they went through proper channels to return to the U.S., and it enables the school to re-activate the student’s I-20 status, Almughirah said.

Almughirah said most of the students choose to re-enter at the Canadian
border because the process is a lot quicker and students are able to focus on their studies right away, while the reinstatement application has lots of requirements for students, such as restricting them from leaving the country or working on campus.

Kim decided to cross the Canadian border at the Peace Arch on Jan. 15 with all the supporting documents.

Kim departed for Canada at night by driving with her friends, and headed back to the U.S. after finishing their dinner in Vancouver B.C.

Without the exact location on Google Maps or any road signs showing them the
way to the Secondary Inspection Office, Kim and her friends were driving slowly at the U.S. border. “I told a border officer that I have to go to the Secondary Inspection Office to get the I-94 form and he told us to turn right,” she said firmly, saying all three of them were sure that was what the officer told them. “But it’s not the way to the office, it’s just the highway to Seattle.”

After they realized they were not on the way to the office, they were not able to return to the border on the one-way road, so they found a way to head back to the Canadian border.

“I didn’t know what was going on,” Kim said, “(The Canadian officers) just gave me a paper form and told me to give it to the American office, but I didn’t really understand what they wrote about.”

After that, Kim and her friends were brought to an American office. They waited there for four hours, alone, before anyone spoke with them.

“It was horrible, (the officers) were treating us really rudely,” she said. “I was just thinking it just takes more time to get the I-94 form but actually I was under arrest at that time.”

The officers let Kim’s friends leave and put handcuffs on her after an hour. She called her parents and fiancé.

“My mum couldn’t sleep and kept on crying for three days,” she said.

It was in the morning on Jan. 16, and Kim was taken to the Tacoma Northwest Detention Center. She was asked to wait at a big empty room alone for 10 hours.

All of her personal items were con scated and she was unable to contact anyone.

“I asked them if I can call my parents, and they just asked me to wait,” she said.

A few hours later, she was directed into a large area, as big as the PUB’s Main Dining Room, with around 100 people and a lot of small bunk beds.

“A lot of people got sick after they ate the food and I heard that some guys were on their hunger strike because of that,” Kim said, describing the inhumane living conditions in the detention center.

On the second day, Kim talked with an officer in the Detention Center about her situation, and was told she could talk with an ICE officer.

“But until the day I got released, nobody came and talked with me,” she said.

Kim’s fiancé, who is an SCC international student from China, Huibo “Andy” Liu said, “I cannot imagine (why) she was being treated like that. I just wanted to get her out as soon as possible.”

Two days after Kim had been detained, Liu hired a Korean-American lawyer and Kim was able to meet her attorney.

“But the lawyer told me the detention center didn’t even have my own file,” she said.

Since it was overcrowded at the detention center, they had no information about when the court hearing would be, which meant she would have to stay in jail for at least a month.

During the 10 days, Liu kept on waiting for news from the lawyer, frustrated.

“It was usually bad news, saying that she has to wait for one more day, one more week,” Liu said, and according to him, he was told that there was no option for Kim to leave, even by paying a bond or talking to the prosecutor, as she was labelled an “arriving alien.”

According to Kim, a Customs and Border Protection (CBP) officer told her, “I don’t know why your school would let you to do this, this is the worst and most risky way to regain your status.”

Unlike SCC’s website, both options of reinstatement and re-entry to regain student status are available on the websites of the UW and other community colleges, stating re-entry from Canada is also fine.

Given that ICE considers re-entry approval based on students’ background and immigration history, Kim said she always attended class and has never previously violated any immigration law.

Almughirah, as a staff member who has been working in the field of international education for 10 years, said being denied re-entry has never happened to an F-1 student who has a good record. “I do know some students who were denied because of multiple F-1 violation histories but I have never known anyone who was detained,” she said.

“There has not been a change in policy,” said Jason Givens, a spokesman of CBP, replying to an email from the Ebbtide. The response was similar to what the Seattle Times reported while Kim was still detained: “CBP officers enforce the law according
to the Immigration and Nationality Act.”

“It is the students’ responsibility to renew their visa before the expiration date, and individuals attempting to enter the U.S. with expired visas may be refused entry or detained,” Givens said.

Kim’s lawyer attempted to call ICE to ask for either discretion or permission to return to South Korea. Yet both strategies failed since she was told by ICE’s Office of Chief Counsel that ICE no longer considers requests for discretion, according to the Seattle Times.

For the first nine days, both Kim and Liu were still being told by the lawyer that her case was dismal and there was nothing much they could do.

On Jan. 26, Liu contacted the Seattle Times. The Times reported that they were told by an ICE spokeswoman that she did not have any information at the time and would respond to the case after the weekend.

Within an hour, “suddenly the officer rushed me to pack all my personal stuff and released me,” Kim said. No bond was required and no reason was given.

Liu instantly rushed to pick Kim up and found her crying in the lobby of the detention center. “We were both crying so hard,” he said.

With the surprising ending, Liu said they believed that ICE immediately released Kim because of concerns over negative publicity.

When asked why ICE released Kim, the spokesman of CBP, Givens, referred
the Ebbtide to contact ICE for an answer. However, a spokeswoman for ICE, Lori K. Haley, referred us back to the CBP.

As of this writing, no response has been provided from either department related to the cause of her release.

“We hope that what happened to Rachel is not a trend,” Almughirah said, “it’s a very odd case and it shouldn’t … happen again.”

Kim also was burdened by people’s attacks on the internet after the news came out, and said that some of the news media in China and Korea even translated the Seattle Times’ article in misleading ways, causing her to suffer from depression, crowd panic and other physical sickness caused by stress.

“Some people said I was detained because I didn’t go to classes and still went to Vancouver to have fun,” she said. “It’s just too much for me.”

Kim returned to class two weeks after her release and started to catch up with support from her professors. Unfortunately, she had to drop one of her ve-credit classes because she was not able to attend some of the class activities.

She didn’t feel optimistic about her grades this quarter but taking 12 credits is required to maintain her status while the case is pending.

Kim is still in deportation proceedings and will have an immigration court hearing at the end of March. Her lawyer predicts that there is a high possibility that she would be deported back to South Korea.

Originally, Kim was going to graduate and transfer from SCC this quarter, but she
is now unable to because of all the obstacles stemming from the detention. Hoping for admission to UW Bothell, she said she is also applying universities in Australia in case she is deported.

She said that a lot of her friends who are international students didn’t know there was an expiration date on their I-20 until they saw her case.

“We did that purposely to make sure students were getting the same information every time we show the immigration session during orientation,” she said.

“We do routinely contact students and do our best to communicate with them.”

Almughirah said for international students, knowing the requirements
to maintain their F-1 student status is their ultimate responsibility. Yet, she understands students sometimes will encounter difficulties in maintaining their status, and suggested they stop by the International Education Office (Room 9302) to talk with advisers or staff.

In regard to the tragedy Kim has gone through, Almughirah said the college felt sorry to hear what happened to her, and will support her as much as possible by offering academic, immigration and counseling support.

“With any student in this situation, we would offer them whatever services we have here at the college… for them to get help and assistance,” Almughirah said.