Anita Hill Wants to Inspire You 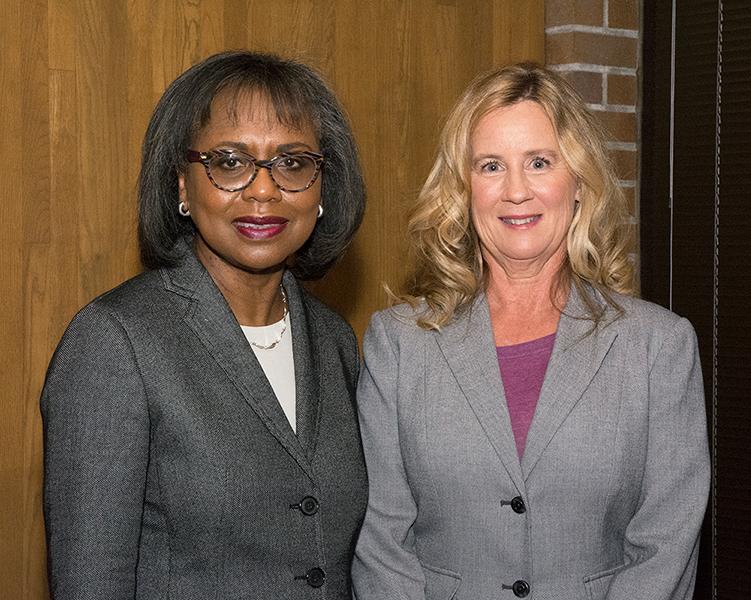 A Story of Injustice, Sexual Harassment and Hope

Anita Hill (left) was given a rousing introduction by Christine Blasey Ford at a recent UW lecture. Both have spoken up about sexual harassment during Supreme Court confirmation hearings. (Photo by Emily Pitre / UW Office of Public Lectures)

[ads_dropcap]A[/ads_dropcap]nita Hill strolled toward the podium to give a lecture for UW’s “Success” series.

She had just been introduced by Christine Blasey Ford, and when the two hugged on stage, the crowd went wild. It sounded like old videos of the Beatles getting mobbed by teenagers; the outpouring of respect was like being in the presence of legitimate superstardom.

Both Hill and Blasey Ford received national attention bringing up issues of sexual harassment at hearings of Supreme Court nominees.

When the din died down, Hill billed herself as a lawyer and advocate. But most of the crowd — many of whom had waited over an hour for the mere possibility of getting a ticket — considered her a warrior.

In 1991, Hill testified to the Senate Judiciary Committee (SJC) that Supreme Court Justice Clarence Thomas had sexually harassed her in the workplace. From 1981 to 1983, Thomas had supervised Hill at the U.S. Department of Education and Equal Employment Opportunity Commission.

The hearings were a national sensation and garnered widespread television coverage. Major broadcast networks cancelled soap operas and game shows to air them.

Rachel David, SCC professor of Gender and Women’s Studies, was working at a publishing company during the hearings. She remembers it vividly: “Everyone was watching or listening. I would walk through the halls of the office and everyone had the audio coming out of their door.

The SJC that judged the case was comprised of 14 white men.

Terry Taylor, SCC History and Political Science professor, recognized that Hill was not alone in the treatment she received. “Women who claim sexual assault are not taken seriously by largely all-male political panels,” he said.

As head of the committee, then-Senator Joe Biden ended the hearings after Thomas called it “a high-tech lynching” in reference to his own racial identity as a black man, and the Senate subsequently approved Thomas 52-48. Almost thirty years later, the nomination of Supreme Court Justice Brett Kavanaugh (who was also accused of sexually inappropriate conduct) got approved 50-48 in 2018.

Hill offered inspiring words about her own experience: “I will not allow (the SJC) to rob me of a just world.”

Hill is a tenured law professor at Brandeis University as well as the chair of the Hollywood Commission on Sexual Harassment and Advancing Equality in the Workplace. In 1989, she became the University of Oklahoma’s first tenured black professor.

During her speech, Hill questioned aloud whether she was a worthy choice to give a lecture on “Success” given the outcome of her case. Her conclusion: “I survived 1991. That was a success.”

As a child, Hill loved mechanical toys. She had a typewriter with a little doll woman attached to it; when it broke, she said she would take it apart and rebuild it.

“Occasionally, when I did so, it worked again,” Hill said, comparing the anecdote to strategies she employs as an activist today: “We have to take some things apart and put them back together.”

Speaking about her experiences in school, she said, “No one said I might be an engineer or scientist.” At Oklahoma State University — a school with a student body of 18,000 — she says she was one of 200 black students.

Stories That See the Light

During her speech, Hill praised Blasey Ford’s testimony in 2018 as “an act of sheer courage and faith.”

Both Hill and Blasey Ford put themselves in situations where they would receive public scrutiny, and both shared their experiences in front of a nation which is inevitably affected by those who sit on the Supreme Court.

Taylor said the two hearings are remarkably similar: “A woman comes forward, she’s essentially not believed and she’s put on trial in front of the TV cameras.”

Hill received significant backlash for her testimony. The committee questioned why she hadn’t said anything sooner as well as why she would continue to work with Thomas after the incidents had occurred.

“(The) confirmation committee could not grasp why Hill waited 10 years to go public with her accusations,” Rachel David said. “Anyone who had studied sexual harassment or been exposed to it understands the tremendous barriers in coming forward.”

She noted that at the time of the incident, the Supreme Court hadn’t yet ruled that workplace sexual harassment counted as discrimination under the Civil Rights Act of 1964.

Hill highlighted a poll taken in a 1976 issue of the magazine Redbook titled “Sex on the Job” which revealed that out of 9,000 women, 9 out of 10 had been been subject to unwanted sexual advances in the workplace.

She pointed out that no government researchers were looking into the issue at the time.

The website for the National Sexual Violence Research Center (NSVRC) states that 8 out of 10 cases of rape, the victim knew the assailant. It also says that 40.8% of female victims of rape and 52.4% of male victims of rape report being raped by an acquaintance.

“Women who publicly accuse men of sexual harassment are so incredibly brave,” said David. “I believe that they rarely, if ever, do it for themselves. The costs are too high. They risk public humiliation and scorn and disbelief, or just being discounted.”

Taylor has a poster on the door to his office in support of both Hill and Blasey Ford. “It’s important to believe all women when they say they’ve been sexually harassed,” he said. “There is a long tradition of not believing women.”

Hill didn’t mince her words either: “Women had to put up with a bunch of… even in the courts,” she said, catching herself before actually cursing.

Hill emphasized that her goal was to get access to equal rights for all. “I believe it then, I believe it now, and I believed it in 2018 with Christine Blasey Ford,” she said.

Did America Learn A Lesson?

Kinsel sees parallels between Hill and Blasey Ford’s testimonies and the increase in women in Congress. “I think that something like this brings home to women that are watching that they’re not alone but they still might not be believed.”

Hill spoke about the progress that has taken place since 1991, saying “I believe that we will not ever turn back to the past without a fight.” Now, she works with plaintiffs in the scandals that have rocked Hollywood over the last few years.

She blames a lack of diversity as a sticking point for progress and talked about how she was saddened by the recent failure of a statewide affirmative action ballot measure, but said that the advocates and the area are “on the right track.”

A goal, Hill urges, would be to achieve “a more diverse body in the institutions and the decision makers.”

Near the end of the lecture Hill provided a guide to fighting sexism, focusing on what she’s learned over her decades consciously doing so.

Her first suggestion was networking, something people can and should consider “despite being a lone operator or individual advocate.”

Hill urged victims not to remain silent. If faced with retaliation, she said to make a detailed record of everything that happens as well as become familiar with workplace and legal procedures. “Sexism takes many forms,” she said, “and they’re all bad; but some we tend to ignore or think are normal.”

“Its trivializing,” said Taylor, “this idea that you can say these crude, rude, sexually explicit things and no one is supposed to take it too seriously.”

Hill offered her stance on federal courts: “We must change the leadership of this country,” she said, pointing to environmental and gender rights as key aspects to consider when voting.

“The Supreme Court has a bigger impact on people’s lives than any other part of government,” Taylor said. He said the court system was extremely vital for providing the framework for change: “You want somebody that has some empathy for the experience of others because they are deciding matters of life and death and how we will live for generations.”

Hill spoke about how racism is hugely responsible for much of the harassment, noting the importance of the “Brown v. Board of Education” decision. “The school system has been a place that normalized racism,” she said.

David agreed, explaining that such racism affects “everything from who gets disciplined in school, who gets called on (in class), who teachers have high expectations for, who advisors talk about college with (and) how intelligence testing has been developed and used.”

Taylor said that although the Supreme Court itself eventually started to dismantle the legal framework of segregation, its nominations aren’t discussed enough in the popular discourse. “Anybody that’s concerned about erosion of civil rights or the problems associated with institutional racism and sexism,” Taylor said, “ought to care very much about who the candidate you’re going to vote for will appoint to the Supreme Court.”

Hill recognized how much change has happened since 1874, when her maternal grandmother was born. Although her grandmother couldn’t read or write, she still managed to save up enough money to get her daughter an education. That paradigm continued as Hill’s mother “scrimped and saved” enough for Hill herself to go to college.

Hill said that her mother and grandmother provide inspiration: “They keep me going even in times of desperation,” Hill said.

She offered paramount advice for advocates everywhere: “Find something or somebody that inspires you.”