A Resource for Student by Students 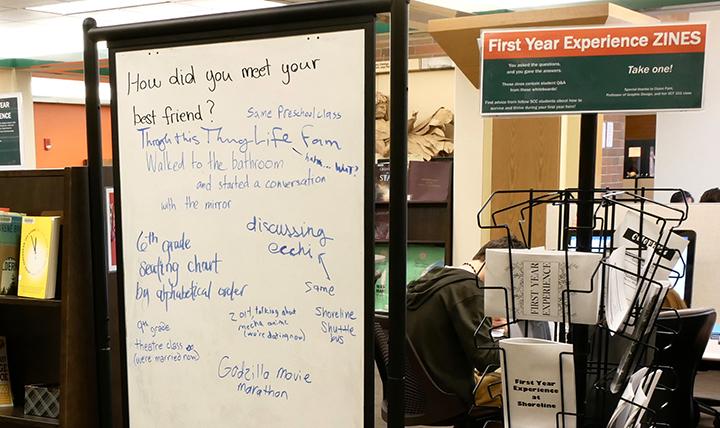 New to the library are Zines, a series of questions and answers compiled into magazines that have been written and designed by SCC students for first-year students moving into college life.

The questions found in the Zines originally came from a student-oriented and interactive whiteboard in the First Year Experience section of the library.

The board featured questions like “What three things should all college students know?” and “What’s the best way to shop and eat on a budget?”

“I just write a question and (students) answer whatever they like,” said Student Library Assistant Abraham Sham.

The Zines’ questions were aimed toward situations that first-year students may find themselves confronting and each one is meant to “solicit advice for fellow students,” said Reference and Instruction Librarian Angie Wiehagen.

Over one to two weeks, students’ answers gradually filled the whiteboard.

At this point, a photo was taken of the board to preserve the answers, which were then loaded to the library’s Facebook page for more students to see, Sham said.

After several photos had accumulated, Wiehagen said she realized “it was really amazing that we were doing this and that students were responding.”

Then she had a thought: “It would be really neat if we could put them into a format that other students could take with them,” she said.

Wiehagen then talked to graphic design instructor Claire Fant about creating the Zines.

Fant decided her Graphic Design 1 students would make the Zines for their final project of fall quarter. Which is exactly what happened.

The students used their own creativity in designing the Zines which resulted in each Zine having its own look, specific to the student who made it.

“(Though) I kind of connected some dots, (the students) did most of the work for sure,” Wiehagen said.

If you’re curious about what your fellow students consider to be the secrets to a successful college career or what the answer is to any other number of college-related questions, grab a Zine from the Library.

Sham said, “One of the greatest pros of being a human is to pass on knowledge and to learn.”