Vandals in the Forest 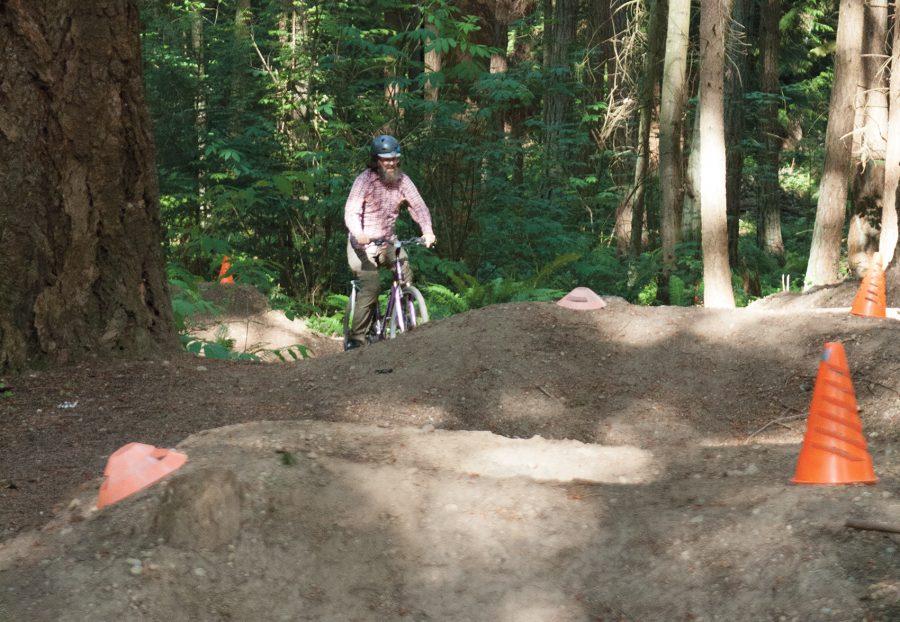 For several years, there has been an unauthorized bike trail in SCC’s restoration area, located behind the soccer field.

About 20 years ago, SCC biology instructor Matthew Loper said he was approached by an organization called Mid-Sound Fisheries Enhancement Group. They showed their interest in restoring a habitat in Shoreview Park, now called Boeing Creek Park.

The restoration focused on removing non-native plants like Himalayan Blackberry and planting native plants. This group worked with Loper for about two or three years.

Loper said he used to run SCC’s Environmental Technology Program, where he found students to help with the restoration, while also opening the activity to the rest of SCC. They helped with planting in Shoreview Park annually and have gone up to the forest by the track for the past 10 years.

Tim Payne, one of the SCC faculty helping support the restoration, said he was astounded by Loper’s dedication and efforts to restore the area. Payne and other faculty members, such as Adria Magrath and Chip Dodd, have been involved in the process of removing the invasive plants and planting native ones for years.

“I’ve been out there with a shovel and gloves doing this for several years,” Payne said. “So there’s faculty, many students in the past. Even this year they have been doing it, it’s a community effort to protect it.”

However, three or four years ago, Loper noticed that a bike trail was being created in the restoration area, and that it was expanding. Loper said he kept seeing the same two people who he thought were the ones making the trail.

“I’ve only had two conversations with them, but Adria talked to them, so has Matt, so has Tim,” Dodd said.

Dodd said, even after he told them that he was a professor and that the forest was campus property, the people didn’t seem to care. The other faculty members got the same response. “They don’t see it that way, they see a forest with nobody watching them, so they will do whatever they want,” Payne said.

He said some of the professors tore down the trail, but the people built it back again and made it even bigger than in the last two years.

If it’s only the professors who patrol the area, the kids won’t show any respect for the warnings, Loper said.

Dodd said the campus should be worried about the liability issue. He said that if these kids play in the forest and get injured or if there are future accidents in this area, the campus could be held liable.

Another issue with the restoration area is coming from the people who walk their dogs off-leash and let them run through the woods and step on the new plants.

The City of Shoreline is actually considering expanding the dog park. They want to move the fence a little bit further into the woods because the dog owners are not happy with only playing on the bare ground of the dog park, Loper said

Even with the fence where it is now, Magrath said that over half of the plants don’t survive due to the disturbances.

Magrath, Dodd and Loper have all had classes that have done projects in the restoration area, which Payne calls SCC’s “laboratory in the forest.”

The campus administration has been supportive of Loper’s efforts to take care of the restoration area. A couple years ago, Loper needed to pay for the plants out of his own pocket, Magrath said, but SCC President Cheryl Roberts gave Loper a budget to buy plants and even helped with the planting last year.

“(Roberts) is also interested in addressing the bike trail, but now the challenge is ‘how?’” Magrath said.

The faculty have already put up temporary signs indicating that there’s a restoration going on in the area, but this wasn’t enough to stop the destruction.

However, according to Payne, there’s a plan to put up a proper sign in the area to replace the temporary ones, but they are still waiting for permission from the administration. He said they already have the budget to make the sign, but they’ve been waiting for a year.

The forest is both city and state property, so it’s unclear whose job it is to enforce the trespassing laws, Magrath said.

“We want to be able to have the City of Shoreline get behind us,” Loper said. He said the city could put up official signs explaining the consequences of trespassing, such as being fined.

Loper said that he and the faculty members have discussed the signage in SCC’s Ecological Integrity Steering Committee and hope to have the City of Shoreline Parks and Recreation department’s support on the sign.

“A good sign is one that educates,” he said. “So people know why they need to be be careful, and then also encourages them to be participants and stewards and then help to be a part of protecting the forest.”

Payne said the restoration belongs to everyone, and the fact that SCC has its own natural laboratory makes it unique.