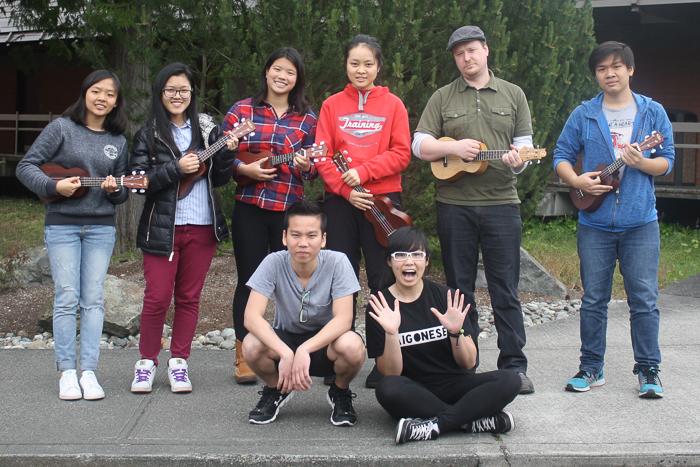 Photo by Adelia Sindunata
Caption: The Ukulele Club with instruments in hand

It was a sunny Friday afternoon, and a few students were playing ukuleles in room 1503. They were playing “Love Yourself” by Justin Bieber and “What Makes You Beautiful” by One Direction. Some students helped the others to play certain chords, and they practiced diligently.

Club president Mai Nguyen said Ukulele Club was the idea of her friend, Canmie Lau, who currently serves as the club’s vice president. They established the club in the summer of 2015 to provide a place for students to learn how to play ukulele and hang out with friends.

“We picked ukulele because it is easy to learn.” Nguyen said. “We also asked people around the school and a lot of people seemed interested in playing ukulele.”

The goal, said Nguyen, is to bring some happiness to campus life.

The club doesn’t play any specific genre of music. Instead, members will suggest songs and everyone figures out how to play it together.

Ukulele Club has also performed in several campus events. They regularly perform at the International Student Orientation Program (ISOP), and also at events like BREATHE, the Chinese Singing Contest and Earth Week.

Megan Lo, a member of Ukulele Club who joined last winter quarter, knew this club from their performance at the ISOP.

“I wanted to know how to play ukulele because it seemed interesting, so I decided to join this club,” Lo said.

Jinhee Jeong, who has been in the club for two weeks, had a different reason for joining this club.

According to Nguyen, the Ukulele Club faces some challenges. One of their biggest challenges is schedule conflicts.

“People come and go,” Nguyen said. “Although we have a lot of new members, not all of them will come to the next meetings. Due to schedule conflicts, not all members can join our meetings every quarter.”

Other than schedule conflicts, Nguyen sees other clubs as a challenge.

“There are lots of interesting clubs here,” Nguyen said, “And that makes it difficult for the members to choose whether to come to our club meetings or the other club meetings, since there are some clubs that might have the same schedule.”

According to Jeong, who hasn’t performed in any Ukulele Club performances yet, her favorite experience was when they learned new techniques after watching some tutorials.

Lo, who has been in the club longer, said her favorite experience was their performance.

“We performed some songs in the Earth Week event,” Lo said. “That was my first Ukulele performance, and I enjoyed it.”

The Ukulele Club will have performances in the Graduation Party. They also plan to collaborate with Acoustic Guitar Club to do an Acoustic Night performance.

For those who are interested, Ukulele Club meets every Friday from 1-3 p.m. in room 1503.