The Long Road Back to SCC : Jessica Gonzalez Fights for Students 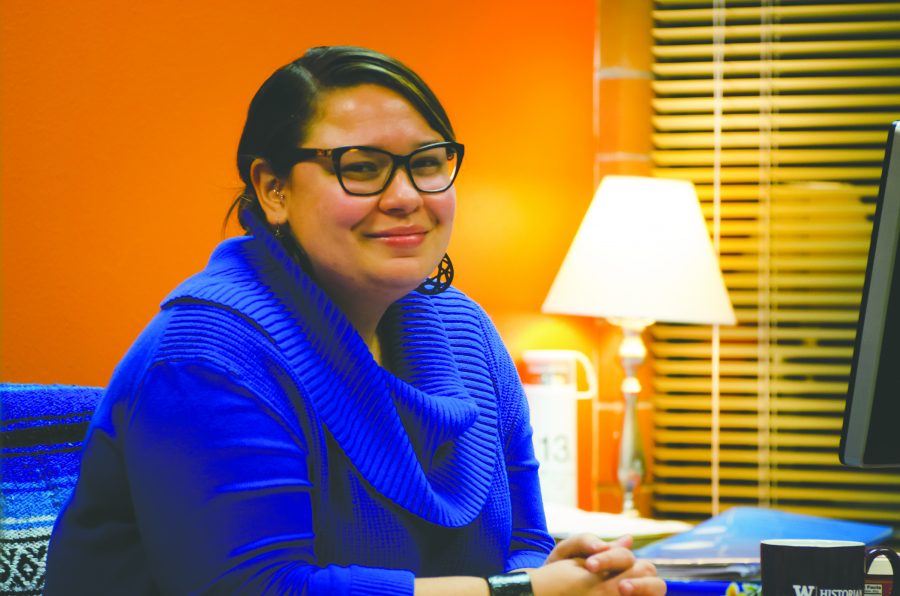 The Tutoring Services office is quiet at 9 a.m., save for the low buzz of the fluorescent lights and the faint stuttering whirs of the Dells stationed around the room. Later in the day, the room, nestled in the southwest corner of the library, will be packed with students and tutors, but for now, it’s almost empty.

This room is where you have a chance of running into Program Coordinator Jessica Gonzalez, whose flowery oilcloth-covered desk sits behind a gray wall at the far end of the office.

Gonzalez has been working at SCC for over a year — she celebrated the one-year mark last month — but her history with the college goes back to when she was first enrolled as a student in 2004. Nowadays, as one of the faces of Tutoring Services and the adviser of Black Student Union (BSU), she stands as an influential figure in many students’ lives, wielding her experiences as a former student, as an activist and as a human being with 33 years of life tucked under her belt, to encourage conversation and to give a voice to the traditionally underrepresented.

Gonzalez’s door is open now — it usually is during the day — but when it’s closed, you can spot from across the room little strung-together banners of papel picado (tissue paper perforated with lacy, intricate designs) on her door. They’re butterflies, specifically monarch butterflies, chiseled into black tissue and fluttering against pieces of orange and yellow construction paper.

The monarchs also have a place inside her office; they’re strung between the wall shelves that are crowded with scattered insights into Gonzalez’s life: some framed pictures (her family, her friends, her partner…), a book (Gabriel García Márquez’s “One Hundred Years of Solitude”), a small silvery Space Needle figurine…

There’s actually an explanation behind the butterfly imagery — one that speaks to Gonzalez’s mission to make her office an open and accepting space.

“The butterfly specifically is a symbol for migration,” she explains, getting up from the serape-covered office chair to admire the string of butterflies. “So it’s my kind of gentle symbol out there for undocumented students (to tell them) that I’m a resource person and that I’m a safe space.”

Gonzalez is big on safe spaces. One of the many Puerto Rican flags around the room flaunts rainbow stripes (“My message to queer and non-binary folks …”), and fliers tacked to a cork board announce events for Indigenous People’s Day and for BSU. But the decor doesn’t embrace diversity just for diversity’s sake; everything points back to Gonzalez’s own values, beliefs and background.

Gonzalez was born in Brooklyn to an Afro-Puerto Rican father and an Eastern European mother. She was raised in Queens along with three brothers, and despite moving to the West Coast in her early teens, she maintained the straightforward, fast-paced way of speaking that many born-and-bred New Yorkers are known for. New York was where the roots of her worldview began forming — the diversity of Public School 68 encouraged broad perspectives — but it took the clashing worldviews of others for her to start developing a concrete perspective of the world.

For Gonzalez, this rejection became most pronounced when her family settled in Kirkland, after her parents’ concerns about New York’s safety prompted the family to move out west.

“(I had) folks tell me directly that their kids couldn’t play with me because my last name was Gonzalez … People were just like ‘No, you come from working class people, our kids can’t play with you’ or ‘Our son can’t date you because you’re just trying to get pregnant,’” she recalls.

And as someone of mixed race, Gonzalez remembers facing scrutiny over her parentage and having to navigate the boundaries that come with a multi-ethnic background.

“I’m comparatively lighter than my dad and … there were times folks would aggressively question whether or not my father was my actual father,” she says.

“When you’re a mixed race person, neither group fully accepts you entirely,” she continues.

“White folks are like ‘Whoa, you are way too dark for us, you are too loud, too radical, too everything we don’t like,’ whereas I’ve gotten to a good point building into communities of color, but at the same time, communities of color understandably have particular politics with folks that have lighter skin, because there is embedded privilege in (having) light skin.”

How Gonzalez was perceived by others also came to play in high school (she graduated from Lake Washington High School in 2001), where low expectations and discouragement on the part of educators knocked the idea of college out of her mind.

“I would have people tell me, ‘Oh, there’s no point in you preparing for the SAT because you’re not going to go to college anyway.’ To have people in positions of power and education tell me what I was capable and not capable of was a very painful process,” she says.

“I didn’t end up taking the SAT but I did end up going to college, so ha ha,” she adds dryly.
After graduating from high school, she turned her jobs in the culinary industry into a full-time occupation — she interned with Tom Douglas and went to work in restaurants like Olive Garden and Claim Jumper as a supervisor, a cook, and everything in between. It took her older brother graduating from Princeton to make her realize that maybe she wanted to go back to school. And eventually, she did.

Gonzalez first enrolled at SCC in 2004 with hopes of getting a degree in psychology, but the decision to support her partner through his education led her to Oxnard, Calif. where a series of experiences would redefine her approach to advocating for the underrepresented.

“I don’t come from a background of privilege, but I was aggressively confronted with my privilege when trying to work in Oxnard,” she recalls.

While working at an Oxnard Olive Garden, she found herself supervising groups of undocumented workers who had come straight out of jobs in the fields — namely the strawberry fields that net the region millions of dollars each year.

“Driving down Rose Avenue, you’re cutting through fields of strawberries and, in theory, it’s a really picturesque, very beautiful scenery to cut through … At night, you can smell the strawberries,” Gonzalez says. “(But) during the day, you see people out here in cobbled together outfits with very thick layers in 90 degree weather, trying to cover as much of their bodies as possible to minimize the pesticide exposure.”

Crouching to the floor, Gonzalez starts raking her hands through imaginary strawberry vines.
“They’re working in intense heat and it’s stoop labor, so it’s incredibly physically daunting … The amount of pesticides, the labor infractions…” She stands up and moves back into her chair.
“Strawberries are jacked,” she says matter-of-factly. “(And) slavery hasn’t ended, it’s just transformed.”

After two years in California, Gonzalez eventually returned to the Pacific Northwest and SCC, where she continued her studies before going on to the UW. She graduated in 2014 with a double major in history and Latin American and Caribbean studies, and a double minor in diversity and labor studies.

Now, she’s back at SCC, making a name for herself as a proponent for student voices as well as a constant source of encouragement for all students, whether they come across her at Tutoring Services or at a BSU event.

“She’s got mad love for everybody,” says student and BSU president Terrance Bishop. “BSU hosted a debrief of the 2016 presidential elections and … she gave everybody time to speak, to get their thoughts out, and if she missed somebody, she immediately went back to them to make sure their voices (were) heard.

Bishop continues, “I know a lot of people who are older tend to think (that) we’re just millennials, that … we’re little whiny brats and children. Jess (Gonzalez) actually hears us as adults, she hears us as people with thinking brains (that are) thinking about our future.”
The debrief also played a role in helping breach the divide between faculty and students, according to student PJ Deguzman.

“We (saw) not just students stressing out about this (election) but also faculty and staff,” Deguzman says. “(It showed) that they are human, too, and that was such a big deal especially for me as a student.”

Students also cite how Gonzalez’s background helps them relate to her on a more personal level.

“I’ve talked to her about … being a first generation college student and how my family’s fate rests in my hands — if I was to ever mess up or fail, that would have a serious impact on them,” says Juan Chavez, student and vice chair of the Inclusive Excellence committee, which Gonzalez leads. “She told me something along the lines of ‘Life doesn’t ever get easier, we just learn how to deal with it’ and I completely agree.”

And while students credit Gonzalez for pushing them to reach their goals — Bishop considers her to be the reason why he is now BSU president, for example — she seems content in just giving back to the community that invested so much in her as a student and, now, as a staff member.

“(At SCC), I was allowed to ask questions for the first time in my life and not be rejected for asking questions,” she says. “I think there is tremendous magic in this space because of that … (The college) hired me, they invested in me. I fell in love here, I have grown at multiple times in my life here, now I get to work here … And I feel incredibly grateful for the work that I get to do.”