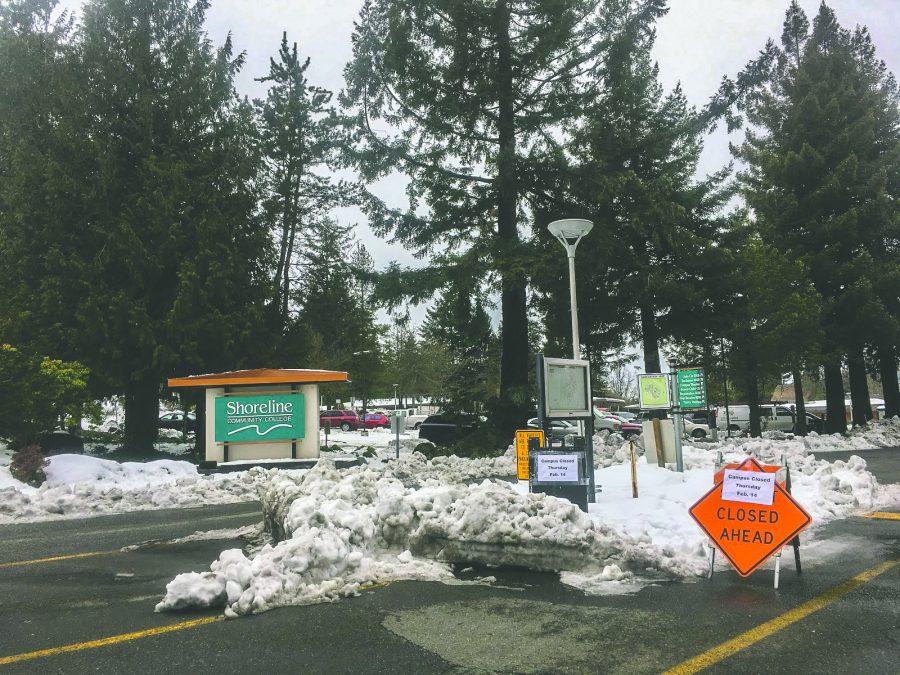 In a two-week period, SCC held only two and a half days of class. This came just short of administration’s goal of four days, according to SCC President Cheryl Roberts.

“We’ve gone 20 years without something like this,” Roberts said.

The topography of the campus complicated efforts to clear the snow. Roberts explained that portions of campus are shaded, so while the sun melted snow elsewhere, the roads iced over even after snow was cleared.

In addition to localized concerns, the administration had to address the safety of students traveling to campus. Weather and road conditions across both King and Snohomish Counties were considered in the decision to close, according to Martha Lynn, SCC’s director of Communications and Marketing. Lynn is also in charge of the RAVE Alert system that notifies students of inclement weather cancellations and other campus emergencies.

The closure of campus appeared to have effectively kept SCC students out of harm’s way.

According to Roberts, the process of deciding whether or not to close the campus begins at 4 a.m., while security personnel are already on campus.

“All three (Safety and Security) shifts took digital photos of the snow accumulation around campus and provided them around the clock when needed,” Lucero said. “The Executive Team members, Director of Facilities Department, and President Roberts were receiving real-time information on the condition of the campus.”

Roberts said she found it encouraging that students were emailing her saying they loved to go to school and asking why campus was continuously closed, to which she responded: “Safety, absolutely safety. It was literally unsafe to be on campus.”

She also said that if people wonder where the leadership lies on the cancellations, she’ll take the hit: “When I’m here, I make the call — so I take that very seriously.”

According to Bayta Maring, SCC’s acting vice president, the most important factor is making sure that the learning outcomes outlined in each courses syllabus are met by students.

When asked about classes that require attendance, she said the task of rescheduling was left in the hands of instructors.

“It’s really up to the instructor.”

A number of professors have vocalized sympathy for the setbacks that students face, such as power outages, work circumstances and childcare.

Maring says her role is to support faculty and students in making any accommodations reasonable and accessible.

There is 24/7 support available from the library as well as online tutoring options, according to an email she sent to students Feb. 12.

Both SCC’s president and acting vice president stated that the reason administration didn’t make blanket adjustments to the school curriculum was to keep opportunities equal between students. Maring says the faculty has been encouraged to work with students individually to help them meet learning outcomes within the confines of their individual circumstances.

The deadline for students to drop a class without affecting their GPA was extended to Feb. 27. Deadlines for graduation and transfer applications have also been extended. Furthermore, the fee has been waived for expedited transcripts through March 18.

“We actually have new funding, new grants and new money,” Maring said in reference to financial aid available to students who have missed work due to snow closures.

Beyond being informed of closures, students were left largely in the dark about the impact campus closures would have on their education.

“I (only) got the warnings for campus closure,” said Brenden Bueller, an SCC student. “That isn’t to say there weren’t any emails, I just didn’t get any.”

Campus employees suffered from a lack of information as well: Jessica Granstrom, a barista at “The Coffee Spot” in the PUB, said she had to check the school website to see if she would need to come to work or not.

“They said school’s going to have a late start, then all of the sudden they said ‘never mind, it’s closed,’ when I was sitting in my driveway ready to go (to work),” Granstrom said of the sudden Thursday closure. “So that was kind of a pain.”

That Thursday was controversial among staff as well, with a few professors arriving on campus to find it closed.

An email Maring sent to the staff on Feb. 6 — the third day of campus closure — recommended that instructors make “accommodations (for students) with regards to deadlines and instructional opportunities.” She also sent an email to students on Feb. 20 which stated that instructors should have been in contact with students about course schedule adjustments, but provided little detail as to what administrative action was taken on their behalf.

“One positive outcome of all of this snow is that it did create a good opportunity for the college to closely review all of its closure protocols,” said Lynn, SCC’s director of Communications and Marketing.

For instance, the language of the RAVE Alert system was adjusted throughout the closure. Initially, the alerts informed students that classes were delayed, potentially causing confusion, but the language was later changed to state that classes before a certain hour were canceled.

Furthermore, Roberts mentioned that they learned how to strategically clear areas of the school rather than trying to clean up the whole campus. For example, by cleaning the PUB area first, people who arrive early can stay warm. She believes this will increase the chances of keeping campus open during some snow days in the future.

Regarding future winter quarters and the possibility of adding buffer days to account for snow closures, Maring said, “Typically we change calendars three years out … I don’t know the feasibility (of changing it) for next year.”