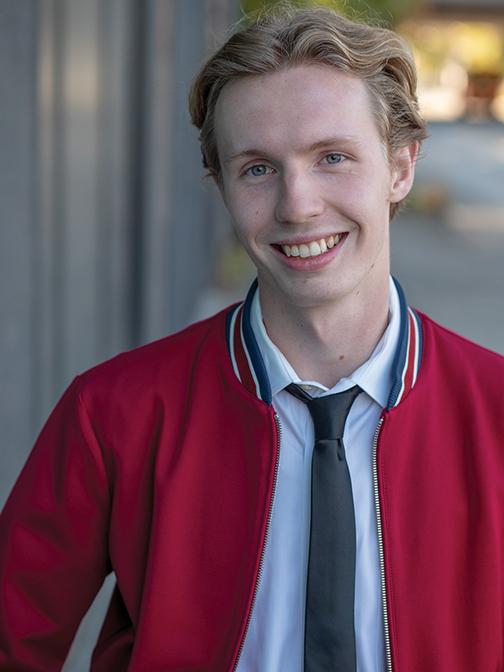 ASPIRING SCREENWRITER GETS IN TUNE WITH HIS PAST

What comes to mind when you hear the phrase “Crossing Borders?” That was what SCC’s recent short story contest asked the campus to write about, and according to the judges, author Duncan Star-Boszko had the answer.

The contest was announced mid-November in the spirit of National Novel Writing Month, and Star-Boszko, who is currently in his last quarter at SCC after two years in the film program, decided to submit his story “Looney Tune” on something of a whim.

“It was written in one night,” Star-Boszko says, explaining how he “felt the need to write something.” His story peeks into the lives of a mother, her child and various husbands who stood in the way of her dreams.

“Looney Tune’s” unique narrative is told through a series of paragraphs that rapidly jump between the points of view of each character, and although the story takes place in Baltimore, Star-Boszko says it is up to the reader to imagine the time period.

The story allows the reader to eavesdrop on the mother and child as they discuss different courses the mother’s life could’ve taken if only she hadn’t listened to the repetitive apologies of her spouse — all with a goal of shedding light on the truth of emotional abuse.

Star-Boszko has a lot of talks with his own mother. “She is a constant positive figure,” he says, describing how the story’s inspiration was derived from several conversations he has had with her.

Perhaps the clearest evidence of this lies in the story’s introduction, which paints a picture of the mother and child idly talking and laughing about inside jokes in their living room. Star-Boszko confirms this was a page plucked out of their real-life relationship.

Star-Boszko thought of the title “Looney Tune” before he wrote the story, which he feels accurately encapsulates themes of innocence and visions of the past. He thinks that the classic “Looney Tunes” cartoons are nostalgic of that time, and therefore, his mother.

In the Spring, Star-Boszko garnered writing and acting credits for several films in his production classes while forming friendships with the faculty. “It’s one of the best parts of the college.” Star-Boszko says, sharing his opinion that SCC is the only local college that effectively incorporates film into its academia.

Star-Boszko distinguishes between film and short stories: with film, you’re writing to show someone something. With short stories, the only senses you have are your eyes and imagination.

Star-Boszko recognizes the many elements that go into creating film, such as production design, acting and writing. He believes that being able to tell the story with these components “opens up a whole avenue of thinking.”

Star-Boszko has been writing for at least eight years to various levels of success, including high school, during which time he became fond of playwriting.

In 2014, his short play “Open Casket” was performed at Seattle’s ACT Theater and subsequently published in an anthology.

Despite the fact that SCC’s contest was geared towards short stories, screenwriting remains Star-Boszko’s true love. His interest in the medium can be traced back to stories he read and watched unfold while growing up.

“(I) quickly realized that I was better at imagining and writing stories than being secondary to that blueprint,” Star-Boszko says.

Today, some of Star-Boszko’s biggest inspiration is derived from Netflix shows, old horror, and old science fiction. He cites 1999’s animated action film “The Iron Giant” as one of his favorite pieces of pop culture, saying it “accomplishes telling an anti-violence story in a way that can actually explain it to people, and can actually make people laugh.”

Star-Boszko’s anti-violence influence is present indeed, due to the clear sentiment against emotional abuse that exists in his own story.

Certain imagery in “Looney Tune” may strike readers as dismal (such as a recurring moment where the mother is proposed to with a breakable, plastic ring) and lead them to believe that these situations are merely exaggerated symbols to reflect her dismal circumstances.

However, Star-Boszko revealed it may just be that bleak. “They are definitely happening,” Star-Boszko says, although he agrees they could be a metaphor for something bigger.

Symbolism does come into play, however, when dates the mother is taken on are compared to a tape rewinding over and over.

Star-Boszko explains that this describes the three husbands repeatedly taking her to the movies: a date that’s not exactly special, but rather “the only thing that the man knows to do” — a direct result of limited money and experience.

The story can be summarized by its last line, which eloquently reminds the reader that “if you’re real clever you can do it all without swinging a single punch.”

Star-Boszko shared his favorite part of the experience. “It gave me a chance to express feelings that I don’t get a chance to talk about with others regularly,” he says.

“Writing is a great way to tackle your own issues,” Star-Boszko says. “It creates a mental shift in your own thinking.”

Star-Boszko faced challenges during the process, too. Because he hadn’t written in short story form in a long while, he encountered “the same problems as anyone else who has ever written a story” — namely the occasional feeling that certain paragraphs didn’t sound right.

Star-Boszko wasn’t necessarily expecting to win, either. “When I heard that I won I was a little amused and surprised,” he says. Because of his story’s somewhat off-kilter theme, he assumed that stories with a more geographical or political interpretation of “border” might be picked.

That said, Star-Boszko remains an example of why thinking outside the box is sometimes the best bet.

He also runs a showcase called The Horrible Art Gala — a tongue-in-cheek exhibit that questions the difference between “high” and “low” forms of art.

“People just bring in pieces of art that we think are horrible,” Star-Boszko says, and notes that this time, the event will serve as a fundraiser.

“Any money we make goes to education scholarships for city of Seattle,” he says, which will also be evenly split with a production house he belongs to.

In the meantime, Star-Boszko has high hopes for the future.

In 2019, Star-Boszko urges everyone to find their inner creativity and use it not only to help themselves, but to better their community.

“Looney Tune” will be available to read in SCC’s 2019 volume of Spindrift.