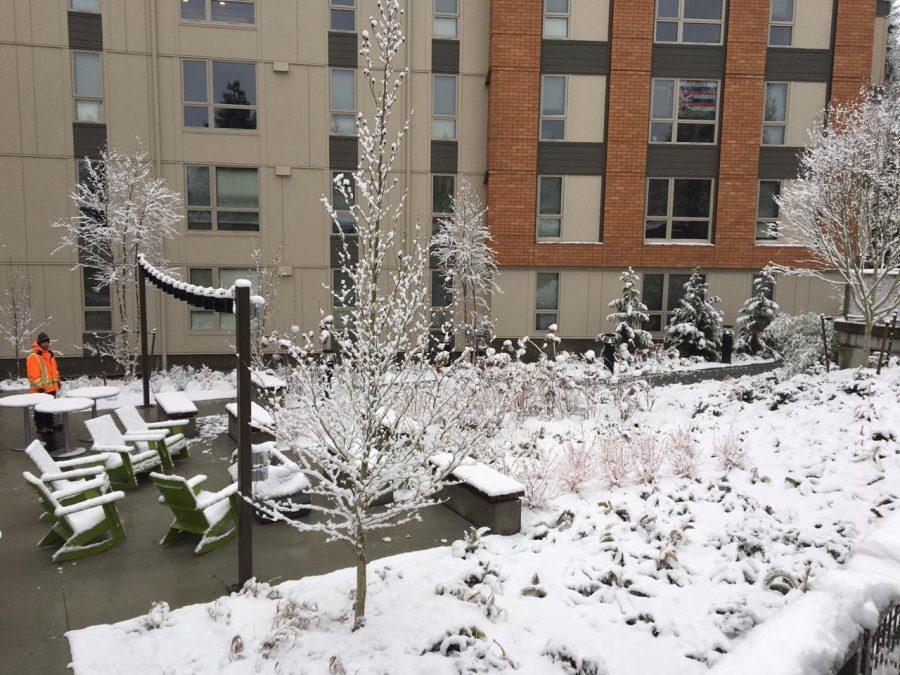 While students checked their phones at 8 a.m. on Jan. 13 in anticipation of a delayed opening or campus closure due to snow, SCC’s facilities department was already three hours into their work day.

On snow days, the process begins at around 4 a.m., when Director of Security Edwin Lucero and Director of Facilities Jason Francois coordinate with SCC’s administration about whether the campus will remain closed for the day or if there will be a delayed opening.

If they decide on a delayed opening, Francois contacts Maintenance Supervisor Ron Norimatsu at around 4:30 a.m. and Norimatsu calls for the rest of the facilities team to be on campus by 5 a.m..

The team will start by assessing important areas of the campus and move around accordingly, prioritizing spots that have frozen back over or that may be slippery.

“The 9000 building, the daycare, you know — we communicate on radios so we know what other areas we have to cover,” Norimatsu said. “Like dental hygiene, they have a lot of stairs.”

To prepare the campus grounds for safety, they begin by scraping off the top layer of ice and use plows and snow blowers to clear the rest. If there is still too much ice, they will recommend to the administration that the campus be closed.

SCC President Cheryl Roberts will make the final decision and Director of Marketing Martha Lynn will send out emails and RAVE Alerts. Closing the campus is a last resort, which is why the decision to do so is announced later in the morning.

According to Maintenance Mechanic Tommy Harvey, the facilities team takes pride in their work and in making sure that they get the campus open — especially when other campuses are. “It’s a little like a competitive thing; we go in with the mindset that we’ll be proud of what we do,” Harvey said.

Norimatsu added that safety is their number one priority, and that students and faculty have been helpful in reporting any dangerous areas that the team may have missed.

Norimatsu recalled the recent snow days on Jan. 20-22: “We didn’t really do any work orders until we got done taking care of the campus,” he said. “But if we get a call that … there’s a little patch of ice, then we’ll go take care of that.”

According to Harvey, the crew worked eight hours to clear the ice on Jan. 22 just so that there could be a possibility of opening the campus the following day.

Harvey explained that their success is owed in part to a process they have been using for years, saying that they still take cues from the training they received back in 2003. “We try to just keep the same old system because if it ain’t broke, don’t try to fix it,” he said.