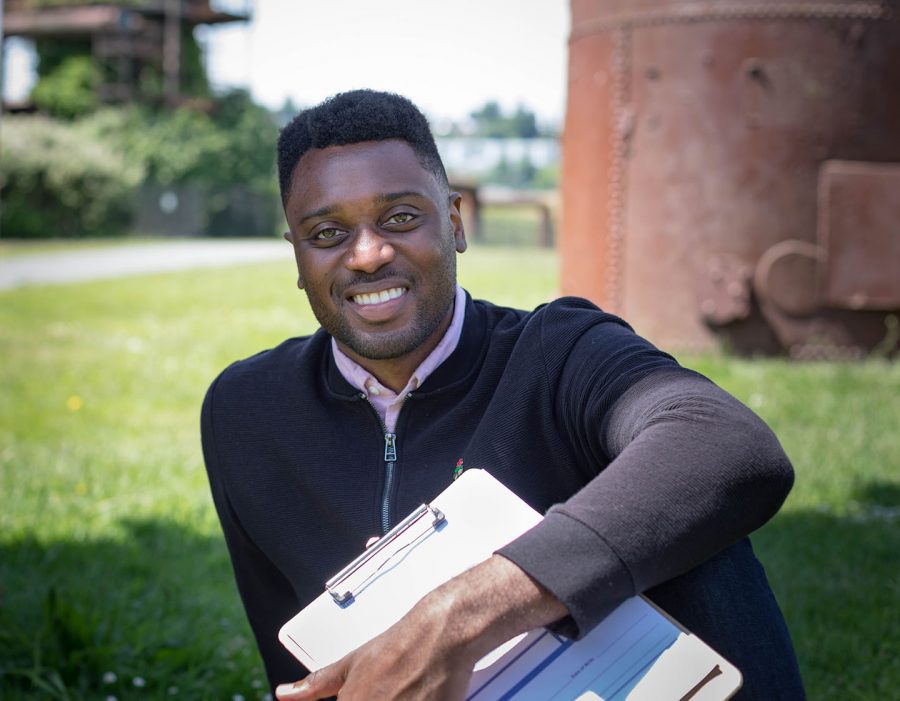 A FORMER ASG PRESIDENT’S REFLECTIONS ON POLITICS AND ACTIVISM

Every two or three years, 34-year-old Shaun Scott takes a bus from Seattle up to SCC. Nostalgia drives him to visit the campus that helped mold him into who he is today: a candidate for Seattle City Council’s Fourth District.

Shaun Scott was at Shoreline a decade and a half ago — now he’s running for Seattle City Council. Photo credit: Samantha Rowe

Scott didn’t plan on getting into politics, but he was looking for what he could personally do to help out the people from his own generation deal with the trials, tribulations and fallout of the Bush era.

“I made a decision to get into public life because there are people who really need help,” he said.

Scott graduated from both SCC and UW, double-majoring in history and philosophy. He considered a career as a history professor, and says he still might want to do that someday.

He has strong feelings regarding career politicians, and has advice for the current iteration of student government.

After starting out as a Running Start student, he served SCC as its Black Student Union president in 2001-2002 and the Associated Student Government (ASG) president the following year.

“There were a lot of students who felt disempowered,” Scott said, which was his motivation for running.

“A lot of us were under the squeeze with the cost of textbooks rising astronomically,” he said. “The conversation about having dorms on campus had just started to flair up a bit.”

And for him, 9/11 was a major inflection point in his life. He worked with the Muslim Student Association fighting back against the decay of civil liberties in the ramp up on the War On Terror.

There were comparatively run-of-the-mill issues as well. One of the big concerns was about the student fees going to the renovation of the HUB (which is now called the PUB).

As a candidate, Scott has learned that you don’t just become who you are through the wave of a wand; it takes hard work.

“I made the decision to get into public life because there are people that really need help in this city,” he said. “So knowing that there are people really depending on us to come through and deliver on the policies: building as much affordable housing as possible, helping to house the homeless, guiding the city on taking real action on climate change — those are responsibilities that are bigger than me and they’re bigger than any one individual.”

His background in community organization has its roots in Shoreline.

Scott pointed to SCC Professor Ernest Johnson as being one of his primary influences driving him toward public outreach. Scott learned about activism and social justice from Johnson in two classes and through his role as advisor to the Black Student Union, a role he still holds.

“The multicultural awareness and expertise that he brings to the table — I think for me was really, really formative,” Scott said.

“Dr. J — other than my parents — is the one person who has had the biggest influence on my life and outlook.”

Speaking about Scott’s current goal of becoming a city councilmember, Johnson said he “would imagine that he will pursue it with the determination, integrity and dignity that I know to be core to his character.”

Scott reckons that there was a point in time where they spent as much time together as they did with their actual families. To Scott, Johnson really stands out as a black male role model. “I can’t say enough about how much I was able to learn from him.”

Scott was also privy to a shifting landscape at SCC. “I saw the campus change a lot. I felt a sense of accomplishment that it had been our student government — among some of the others — that had played a role in reshaping the campus so future students could get the same education as we did at SCC.

While at SCC, he helped run a student newspaper called “Adrenaline,” which was produced by the ASG themselves and came from the vantage point of trying to explain what it was like and how they could get more involvement.

The paper fit in with his mantra: A little bit of outreach goes a long way.

The president of the school at the time passed down an idea to him that he still holds on to: “It doesn’t matter what the stakes are,” Scott says, remembering her words. “You have to conduct yourself as if this is a professional and serious enterprise — no matter what you do.”

Originally from New York, now he is a 26-year resident of Seattle. Scott says he doesn’t want to stay in politics long, citing lifelong politicians as being too career-focused and not putting enough emphasis on serving their communities.

“There are more people than not in politics who are driven mostly by ambition. For me it’s a more personal ambition, trying to advocate on behalf of communities that need help.”

In 2005 he joined the Seattle Civil Rights and Labor History Project, which is a broad and influential series of videos focused on oral storytelling. As Scott describes, it “tracked the history of racial discrimination across Seattle’s neighborhoods.”

From there he cut his teeth as a documentary filmmaker (which he had been doing since his time at UW), making films that tried to highlight the local flavor of the region. He’s made films about American consumerism and about Seattle’s skyline.

Back in 2010, an article from The Stranger said of him: “He might be the first local artist to fully and successfully integrate the art of DJing with the art of filmmaking.” 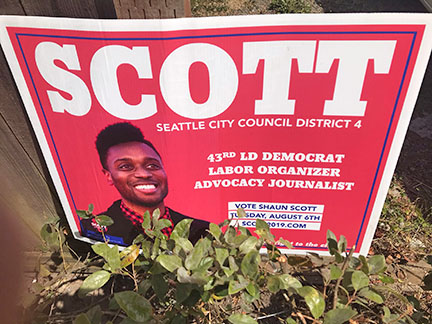 “Don’t lose track of your relationship building,” he said. “Because so much of the work of government — at any level, honestly — is how you make the people you interact with feel.

“Politics is essentially competitive. It’s an arena for competing interests: What’s good for the sustainability group might not be good for the tech group.”

He mentioned the importance of having connections with colleagues to fall back on when you are trying to see something through: “Make sure that your relationships — even with people you don’t necessarily personally like — are at least in a good place so that the door is always open.

“SCC was the first experience that I had in being somewhat independent and coming into my own as far as my ideas. So whenever I was feeling disoriented at UW, it always felt good to return there.”

Scott said that he hasn’t made the bus trip to SCC in a little while and plans to do so in the near future. Maybe he’ll speak to students, maybe he’ll just soak in the atmosphere of the campus that helped make him.

One thing is for sure: Another reunion with Dr. J is in the cards.