Matt Fieser: The Art of a Veteran 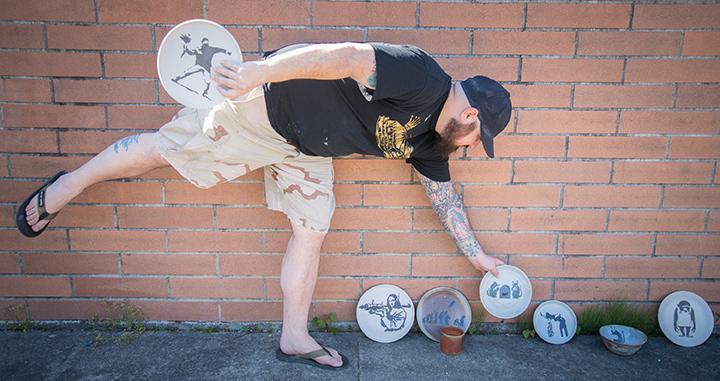 Matt Fieser didn’t come to SCC for a degree.

With a bachelor’s from the UW in communications and six months left on his GI Bill benefits, Fieser came to SCC to take art classes. He wanted to learn.

Fieser had been in the army for 10 years, and he wanted to explore art. He enjoyed taking Drawing 1 at SCC, among other art classes. He ended up in Sam Scott’s ceramics class, thinking it would just be filler. It ended up being his favorite class.

After three quarters of learning and experimenting, Fieser has developed a technique of using black slip (clay and water mixed together, with the consistency of heavy cream) to put a stenciled image on plates, bowls and cups. The stencils are primarily Banksy’s, which he finds online.

He was first introduced to famed street artist Banksy’s work by his ex-wife. After they split up, Fieser gave her a plate with an image on it he found symbolically resonant: a girl releasing a heart balloon into the sky.

Many of Banksy’s stencils that Fieser uses on his plates pertain to war. One pictures the Mona Lisa, with her iconic smile, toting a bazooka.

His favorite stencil of Banksy’s is an Apache helicopter with a pink bow on it.

“How emasculating it is is kind of funny,” Fieser said about the image. While Fieser was in Iraq, he received air support from Apache helicopters.

On the plate with the image on it, the bow is the same color as the helicopter — introducing color is new for him.

He encourages fellow veterans to do pottery. According to Fieser, he is “creating something instead of destroying it.”

Pottery is therapeutic for Fieser. He has to concentrate when he has to center clay on the wheel, to get it to do what he wants. He doesn’t have to think about anything else.

“Some dudes get it from ultra marathons, I get it from pottery,” Fieser joked, referencing a run that is longer than 26 miles.

Fieser knows that for veterans, “People can’t understand if we don’t tell our stories.” He wants to show veterans it’s okay to be vulnerable. He believes telling the stories of his brothers who were killed is a way of keeping them alive.

“People don’t want to be pitied,” he explained.

When he began experimenting with this art form, he told his military friends about it and they were jokingly concerned.

“Are you okay?” they would ask, when he told them what he’d been doing with his time.

Adjusting to civilian life after war was, of course, difficult. Counseling helped him, for a little bit.

“I miss war, in a weird way,” Fieser said, though after getting out of the military in 2012, Fieser wouldn’t want to go back. It wasn’t the violence of war he missed, he explained, but the excitement of brotherhood. He missed the sense of purpose, being part of a team and the gut checks — being terrified of doing something, then doing it, and the rush of relief and confidence that followed.

After being a sergeant in the military, Fieser has had to retrain his brain not to be a leader when he isn’t required to be. He’ll see students on their phones during class and have to remind himself “they’re not your soldiers,” so he won’t snap at them to put their phones away.

“People are just rude in general,” Fieser said. He doesn’t believe it’s hard to be kind. 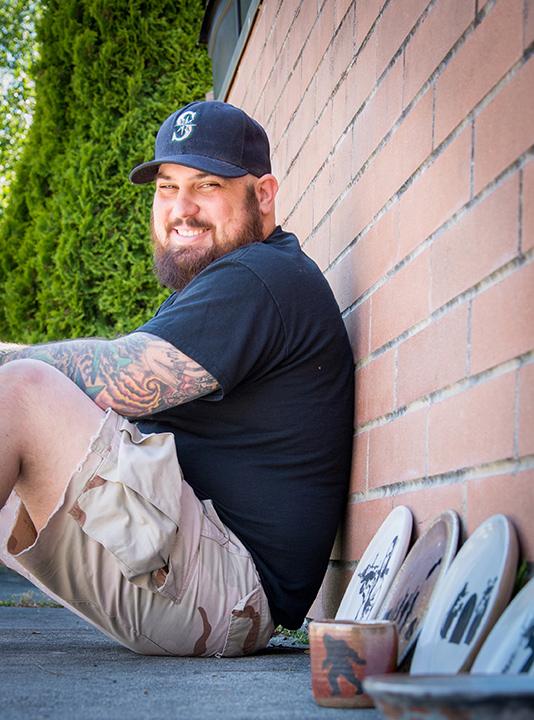 During an interview with the Ebbtide in the ceramics classroom, Fieser saw a girl carrying several pots in her arms toward a closed door.

“I got you!” he said, leaping to the door to hold it open.

Two minutes later, he did the same thing for the same girl holding more pots.

Were a young person to ask him if they should join the military, Fieser would say yes. For him, the military instills responsibility, accountability, honor and courage.

“The military is not about creating steely-eyed, cold-blooded killers,” Fieser said. “It teaches you a lot.”

He has had episodes of PTSD which last for days, during which he’s in his own head, and will only sleep for about two hours a night for a week straight. Even though he knows he needs to sleep, according to him, his brain is “still on reboot.”

But dealing with stress has as many solutions as there are people in the world. For example, marijuana has helped Fieser and several of his veteran friends deal with PTSD, according to him. Personally, he prefers sativa (a type of weed which causes less drowsiness than indica). He doesn’t like to be super sleepy when he smokes.

Outside of school, Fieser works for the City of Seattle’s Parks Department as an administrative assistant. He organizes volunteer teams and coordinates restoration projects, like the removal of invasive species from Seattle parks.

He may be relatively new to ceramics, but Fieser isn’t stopping anytime soon. Creating stencils and putting them on clay has been
experimental for Fieser — and so far, the experiment has been a success.