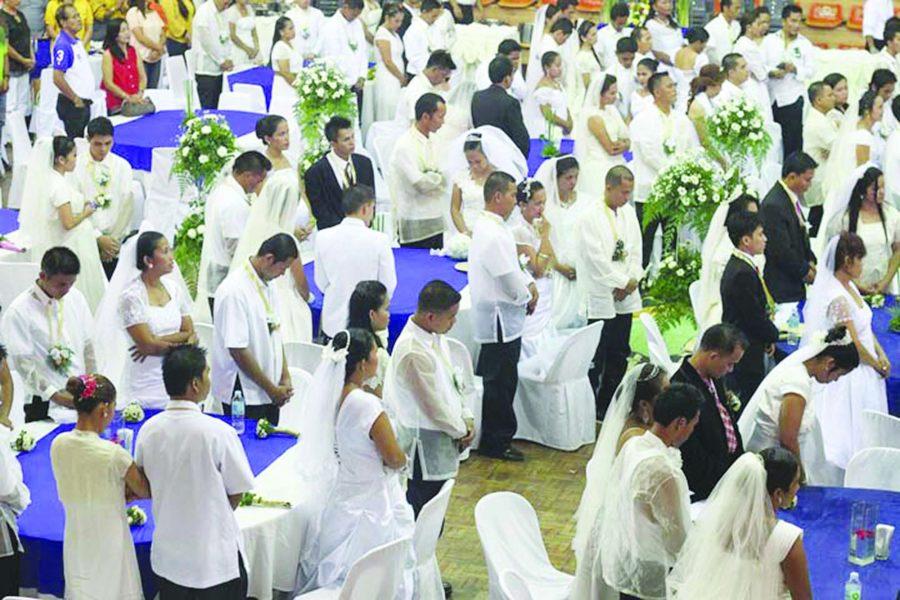 More than 80 couples join the mass wedding at Mandaue City, Cebu. A lot of couples avail of mass weddings because it is cheaper as it is usually sponsored by the city government like this one here. (Cheryl Baldicantos)

Whether you are in a committed relationship or not, the history and diverse cultures of Valentine’s Day may still be something you’d be interested in.

The name “Valentine” itself derives from St. Valentine, a Roman Catholic priest.

Although there are many uncertainties surrounding him, one of the most well-known legends describes St. Valentine as the man who helped young couples get married under the reign of Emperor Claudius, who ruled such a union “illegal”, deciding that young men were better off as soldiers.

St. Valentine was later executed due to his actions.

As he gained popularity, the day of love ended up being named after St. Valentine in commemoration of his devotion to helping young couples and recognizing that the law was unjust.

Although love doesn’t always mean something romantic, there’s a tendency for the day to be associated as one for confessions, dates and grand gestures dedicated to a significant other. In America, imageries of red hearts, roses and sweets paint the common picture for a Valentine’s Day gift.

Beyond the U.S., many countries also celebrate Valentine’s or a day equivalent to it — with some having very unique traditions compared to what is familiar here.

In Japan, Valentine’s Day (also celebrated on Feb. 14) is an opportunity exclusive to women who would like to give chocolate to people they care about.

There are specific types of chocolates that the women give. An “obligatory chocolate” (giri choco) is a cheaper gift generally shared with multiple people, such as classmates or co-workers.

A chocolate that “(expresses) one’s true feelings” (honmei choco) is saved for someone special, typically as a way of confessing to a crush or to an intimate partner like a spouse.

There are a number of other specific varieties, including the “friendship chocolate,” dedicated to friends (tomo choco), or “chocolate for themselves” (jibun choco).

On the other hand, men are expected to respond on a day known as White Day, held on the March 14, a month after Valentine’s. Instead of girls giving, on White Day, men are given to the chance to share gifts with the people around them, or save a few exclusively for their beloved.

Jajangmyeon is a black noodle dish from Korea. However, technically, what’s black isn’t the noodle but the sauce.

Similar to the specific nuances in Japan, South Korea also celebrates the day of love in two parts — Valentine’s Day and White Day, held on the same date.

However, something unique to Korea is that outside of these two days, they have a larger variety of celebrations surrounding the notion of love such as Black Day, which is on April 14. The day is specifically for single people; they generally gather together and eat a traditional Korean dish that resembles a black noodle (jajangmyeon). Some other similar, but less celebrated holidays include June’s Kiss Day or December’s Hug Day, all on the 14 of each respective month.

One of the mass weddings held in the Philippines.

Valentine’s Day in the Philippines often come hand-in-hand with marriage ceremonies; it’s the most popular date for people to get married. The local governments in the Philippines also helps sponsor weddings, which lead up to quite the unique experience —- getting married en masse.

Instead of Valentine’s Day, the Chinese celebrate love in a festival known as the Seventh Night Festival (or QiXi), usually taking place on Aug. 7.

The festival’s origins date back to a classic tale of two star-crossed lovers. Traditionally, mothers or single women, would offer fruits as gifts to the heavens in hopes of finding love for others or themselves.

For couples, they generally wish for prosperity.

Bulgaria celebrates on Feb. 14 as well. This country celebrates Winemaker’s Day, which is usually associated with Valentine’s Day and an abundance of wine. This is due to the fact that February is also when they commemorate St. Triston’s day, who in legends is always portrayed with a vineyard pruner.

What a gaekkebrev looks like; the flower on the letter is a snowdrop .

In the U.S., red roses tend to the popular choice for Valentine’s day; however in Denmark, another flower is also a top contender for the day of love — snowdrops. During another interesting tradition called “gaekkebrev” men send anonymous letters to women filled with a funny poem. The paper usually showcases an intricate cut or design. If the receiver is able to guess their mysterious sender correctly, the man will send her an Easter egg later on in the year.

In Ghana, Valentine’s Day is known as National Chocolate Day. It was started by the government as a form of increasing tourism in the area. Ghana is the second largest manufacturer of cocoa.

Germany takes a more “mature” stance on the day of love. Interestingly enough, pigs are also closely connected to the day as they symbolize both luck and lust. Ginger cookies are another favorite, topping the much beloved chocolate. Sometimes, the two are combined and a pig-shaped ginger cookie becomes a unique choice beyond the regular heart-shaped ones.

Instead of the Feb. 14, May 1st is more commonly associated to the day of love for the Czechs. A specific tradition many couples do on that day is kiss under cherry blossom trees in hopes of having good luck and health.

An example of lovespoons from Welsh Valentine traditions.

The Welsh celebrate love on Jan. 25 — also known as Saint Dwynwen’s Day. Instead of sweets or flowers, wooden spoons are the traditional gift. They’re not just any ol’ wooden spoon — they are usually delicately crafted with intricate designs on them.

Valentine’s day in Peru falls during summertime. Instead of red roses, orchids — a flower common in Peru — is the customary flower gifted between lovers. February 14 in Peru takes place during their midsummer season, which contributes to the preference for orchids, which are flowers native to Peru. Similar to the Philippines, the day is also a popular option to hold weddings.

Instead of just one day, a whole week in July is set aside to celebrate love, specifically through sweets. Known as Sweetness Week, kisses are shared in exchange for treats. They’re literally embodying the whole Hershey’s Kisses ad campaign.

It’s undeniable that some of these celebrations were based off of a marketing stunt in the beginning — like the heavy influence of chocolate in Japan or Argentina. Nonetheless, as the different parts of the world embrace a day of love in each of their own ways, hopefully this day doesn’t disappoint you. Remember: it’s not all about romance.