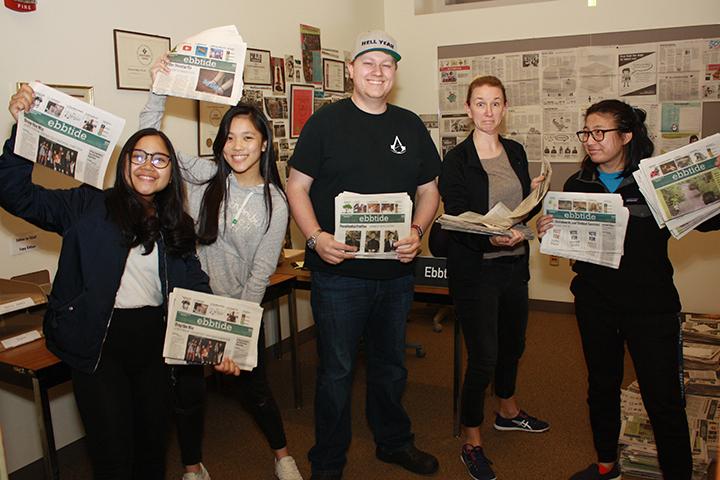 NEW CHAPTER AT THE EBBTIDE

All good things come to an end.

Some of the Ebbtide’s veteran staffers will be stepping down from their positions at the end of the quarter. They may get recognition in our little corner office on the third floor of the PUB, but SCC now has the chance to get a little insight on some of the hardworking individuals that we were grateful to have.


Connor Tee
The man who calls the shots. Connor Tee served as the Ebbtide’s editor in chief for two years and will be leaving SCC with a direct transfer associate degree (DTA-AA).

Despite being the editor in chief, Tee will not be pursuing a degree in journalism. Instead, he said he may choose to do an english or drama degree at UW.

“I like (to write) and when I do it, it makes me feel all warm and fuzzy inside,” he said.

Tee said he enjoys how fiction writing, his chosen medium, helps him bring together ideas to see how they connect.

Before SCC, Tee spent three years at Lake Washington High School in Kirkland, one year at Western Washington University in Bellingham and took one non-matriculated class at UW.

He is also a cancer survivor. Tee had Pre-B-cell acute lymphoblastic leukemia, a fast-growing type of blood cancer in which there are too many immature white blood cells in the bone marrow and blood. He had cancer for six months after his diagnosis and received a stem cell transplant on May 21, 2015.

His new immune system was cleared to reenter society in May 2016.

Tee has numerous opportunities to look forward to as he says goodbye to the Ebbtide and SCC.

“School’s the focus,” he said.

Tee has garnered numerous skills as our current editor in chief, and said he could use those skills for book editing in both fiction and nonfiction.

He said one of the hardest things about being the editor in chief was “remembering everything, every time.” Tee was responsible for checking things such as content, punctuation, organization and terms in his team’s articles. Any mistake made fell on Tee.

However, he loved it all.

“For the first time, work has been one of the things I’ve enjoyed,” he said. “I love the people, I love the work and I just loved everything about it.”

For future Ebbtiders, he said, “Just enjoy every piece of it. Enjoy the insanity of it.”
Kristen Clark
If you combine a certified public accountant and a creative soul together, the result would be Kristen Clark, design director for the Ebbtide. Clark won’t be graduating this year, but she will be completing her DTA-AA in graphic design and the Associate of Fine Arts – Photography next spring.

Before Clark became the Ebbtide’s design mind, she worked as a corporate tax accountant for 14 years.

Once she graduates next spring, Clark said she wants to get into contracting, or freelancing, and eventually find a company that fits her interests in motion graphics and infographics.

“I kind of want a variety of things, I don’t want to have one full-time job doing one thing,” she said.

Working with the Ebbtide allowed Clark to get involved with a diverse group of people, who all joined for different reasons.

“It’s been fun working with several different people, which wouldn’t have happened if I hadn’t been a part of this,” she said.

Clark advised those who remain at the Ebbtide, and those who may come in, to be flexible. She said to be open-minded to last-minute changes since it’s not the end of the world if it happens.

“Be able to roll with the punches,” Clark said.
Areeya Tipyasothi
Areeya Tipyasothi is the Ebbtide’s copy editor and the reason why our grammar is immaculate. Tipyasothi and Tee were hired together two years ago, on the same day in their first week on campus, and have been a great team ever since.

Tipyasothi will be continuing her studies at UC Berkeley. She said she hopes to major in computer science and media studies. Tipyasothi was also accepted at UW.

She’s unsure of what her future will be like, besides going to school and maybe owning a hedgehog at some point.

While working for the Ebbtide, her job was not an easy one. Tipyasothi was one of the final proofreaders before the paper was sent to the printers in SoDo. She rarely slept well and dedicated her time to checking each article as closely and carefully as she could.

“It’s not like in high school, where everyone’s the same age,” she said.

Tipyasothi said the Ebbtide also helped her become assertive, when she was previously a much more easily intimidated person.

Tipyasothi is going to be a hard act to follow.

For the new people coming in, she said, “There’s always news to be found.”

She advised them to check online and ask their fellow SCC peers for the scoop: “You’ll always find something,” she said.

To the person who will eventually take Tipyasothi’s place in the Ebbtide, she warned them that they will be tired, but that it doesn’t mean they should cut corners.

“You’re the last line of defense for the newspaper,” she said.

Despite the hardships of being copy editor, Tipyasothi said that being a part of the Ebbtide is a “valuable experience.”
Frances Hui
The newest member of the editorial staff, Frances Hui, the Ebbtide’s political editor, will be stepping down after two quarters at the paper.

Hui is dedicated to journalism and often spent long nights in the office diligently constructing in-depth articles. Hui will be going to Emerson College in Boston, Mass., and will continue to study journalism.

In Hong Kong, where Hui is from, she volunteered for Truth Media Hong Kong and was the group’s first female photojournalist. In a region near her home, she also helped establish a student-run community newspaper.

While she worked for the Ebbtide, Hui said every two weeks, when the paper was released, she was “super excited” to come to school so she could read her work.

“It was very empowering to see my writing in the paper,” Hui said.

Hui advised future Ebbtiders to “not hesitate to ask questions, and to step out of their comfort zone,” and to also not be scared of their editor in chief.
Davira Shaffena
Davira Shaffena, the Ebbtide’s advertising manager and money-maker, will be getting her DTA-AA in business and continuing her studies at the UW’s Foster School. She will also be a part of her Indonesian organization called Permias Seattle, which has about 30 members so far.

Shaffena’s new to journalism and said that her “first week was hard” and she had bothered Tee with endless questions. She also said that the people were supportive and that she was left happy about her articles in the end.

Shaffena’s best advice for any newcomer and returning member is to never “be afraid to ask questions,” a talent Shaffena had herself. “Enjoy the time you have in the Ebbtide,” she said.