At Home Abroad: How I Learned to Love Reading 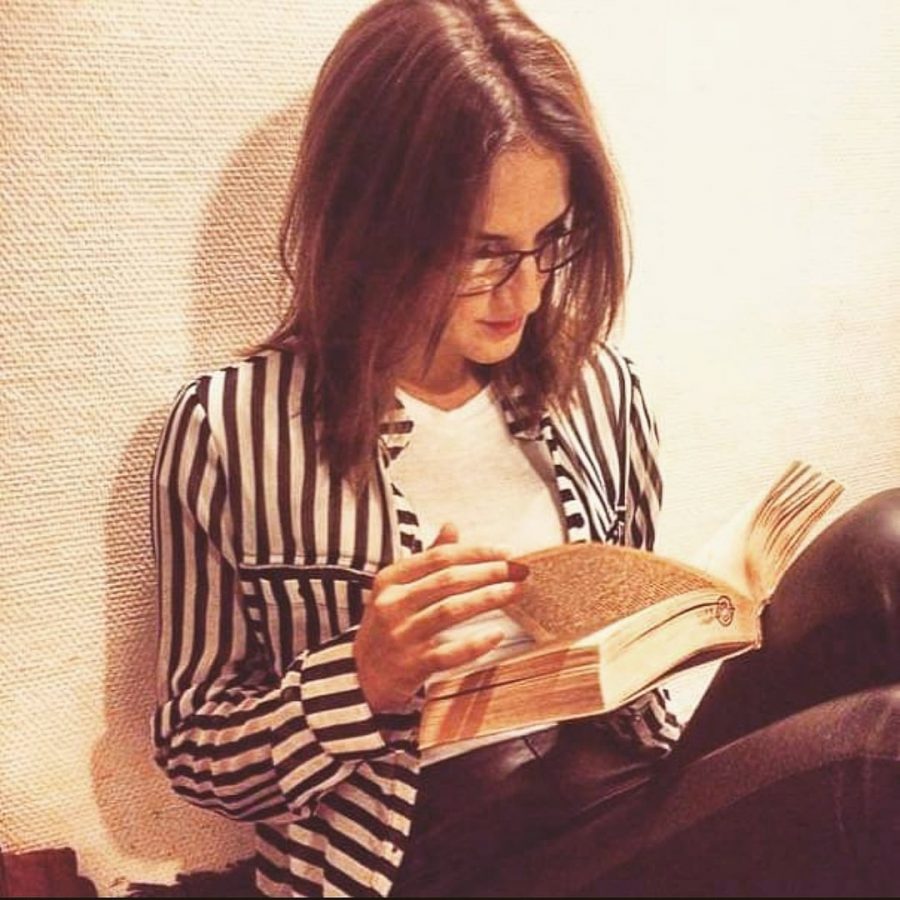 “Part of the problem is that everyone is in such a hurry. People haven’t found meaning in their lives, so they’re running all the time looking for it. They think the next car, the next house, the next job. Then they find these things are empty, too, and they keep running.” —Mitch Albom, “Tuesdays with Morrie”
There was a time when even I, an English Language and Literature major, did not like reading at all.

I found it unadventurous and not worth my time, which is funny considering that words and writing were my one true passion when I was a child, as they are today. I could always find the time to write, but I avoided the prospect of reading a couple hundred pages unless it was for a school assignment.

Each Christmas, my mother would give me one of her favorite books in hopes that I would fall in love with all of its marvelous characters just as she had.

From the mad Heathcliff to the mysterious Mr. Rochester, these characters were the great loves of her life. Countless times she’d tell me about Rhett Butler and his burning love for Scarlet — and each year, I’d thank her for the stories before saying “I’m just not that into books, Mom.”

Then she’d smile the same smile she offered every year: beautiful and wise, as if she knew something I didn’t.

“You just haven’t found the right one yet,” she’d say. One thing we both knew was that next year, there would be yet another book packed immaculately into rubin-red gift paper waiting for me under the Christmas tree.

As I grew, my attitude toward reading remained stagnant — that is, until my 17th birthday during a conversation with a man I met while traveling in Thailand.

While I can’t recall his name, I can still remember his words as he gave me the greatest gift one could ever hope to receive: the right book.
My First Tuesday with Morrie
I was one of 10 people on a boat heading to Phi Phi Island.

I had been sick the previous day, so unlike everybody else, I sat in a corner trying to ignore the rocking waters and the fact that I’d paid for a trip I couldn’t even enjoy.

I remember thinking that there were far too many people on that long-tail boat when a man approached me.

“Ya look like you’d puke any minute,” he said in a strong accent with elongated vowels that I couldn’t quite place. Looking back, it may have been Irish — or perhaps southern.

“We’re almost there, I’ll be fine,” I replied, glancing at the red-and-crème paperback he was holding in his right hand. Who would bring a book to one of the world’s most beautiful islands? He noticed my stare.

“Have ya had some Tuesdays with Morrie too?”

I shook my head, having no idea what he was talking about. He looked at me as though I’d just committed a crime or announced that I was an alien.

“I’m just not that into books,” I answered in defense. He smiled.

“That’s ‘cause ya haven’t had the right one yet.” And just like that, he handed me the book. His smile reminded me of my mother’s.

“I promise ya,” he spoke with a serious tone. “That’s the real shit. Ya think of any question, Morrie will answer it. Ya feel lost? Morrie will guide ya. In here, young lady—”’ he pointed to the paperback that I was now holding. “—ya find the magic of words.” With that, he joined the rest of the crowd.

I examined the book. This kind stranger’s copy of “Tuesdays with Morrie” had obviously seen some rainy, stainy days. Little did I know that the words inside hadn’t lost a bit of their magic.

Flipping through the first couple of pages, I quickly found the only image printed inside: an old man pictured in black and white. He had his eyes closed with his arms outstretched in a dancing gesture.


This was Morrie Schwartz, a former sociology professor and the focus of the book. “Tuesdays with Morrie” is a memoir written by Schwartz’ former pupil Mitch Albom, who paid weekly visits to Schwartz as he slowly lost his life to a disease called ALS. Two years after its release, “Tuesdays with Morrie” was made into a film in 1999.
Ironically, I ended up as the person bringing a book on one of the world’s most beautiful islands. While everyone else went swimming in the sea, I kept reading that night until the morning light broke through the curtains of my hostel room.

I finished the book the same day the man gifted it to me, only to start it over the very next day. When I reached the end, I read it again. I repeated this five times, bringing the book with me wherever I went.

At that point I realized the man was right — just as my mom had been. I only needed to find the right book. It’s the same as anything else: careers, clothes, food, coffee or relationships. Even Cinderella knew that life is all about finding the right fit.

While reading “Tuesdays with Morrie,” I experienced all of the mixed emotions that bookworms had told me about: the dread of not wanting the story to end, the panic about what to read next, the fear of never being able to find a book as good as the last and the goosebumps you get when the words transport you to different places.

Today, I’m the proud owner of bookshelves in two countries — one at home in Vienna and the other here in Seattle. With Morrie Schwartz’ story, the universe gave me the holy grail.

Schwartz provided that rare kind of advice you’ll always remember. The kind where — years later when you think you’ve long forgotten what you’ve learned — you’ll end up following the lesson as if it were the most natural thing on Earth.

Since my 17th birthday, I’ve read approximately 421 books and look forward to receiving a new one each Christmas.

The following list contains some of my favorite stories. Each one holds wisdom that has turned my world upside down in the best way possible. Some helped me through my worst times by providing me with joy and inner peace. They wiped away my tears and taught me how to see the light in everything.

Maybe you’ll find your “right” book, too. If so, I hope that you may experience the bliss that reading has given me.

“Manuscript Found in Accra”
by Paulo Coelho
“And if I’m alone in bed, I will go over to the window, look up at the sky and feel certain that loneliness is a lie, because the Universe is there to keep me company.” —Paulo Coelho, “Manuscript found in Accra”

Coelho’s skilled means of lifting the reader up and carrying them out of the darkest places using nothing but words reminds me of the superpower I once thought only a parent possessed.

This book got me through my first heartbreak, keeping me both safe and sane while teaching me that sometimes, falling means flying.

“The Why Café”
by John P. Strelecky
“During high school I’d prepare for college. In college I’d prepared for the work world. Since then I’d spent my time working my way up in the company where I was employed. Now I was questioning whether the people who helped direct me along those paths were simply repeating to me what someone had repeated to them in their lives.” —John P. Stelecky, “The Why Café”

This book feels like the moment someone kindly turns on the light so you can walk through a room at night without tripping over the furniture.

“F**k It —Do What You Love”
by John C. Parkin
“The problem for a lot of people is that they don’t really know what they want. They have vague desires: to ‘do something creative’ or ‘earn more money’ or ‘be free’ – but they can’t really pin down precisely what it is that they want. So they drift from one thing to another, enjoying some moments and hating others, but never really finding fulfillment or success (whatever that means to them).” —John C. Parkin, “F**k It — Do What You Love”

Reading these pages means confronting yourself with what some may deem “ugly” truths: the realities that most of us have long known yet refuse to accept. This book is quite literally a shot of audacity.

“The Book of Laughter and Forgetting”
by Milan Kundera
“Every love relationship rests on an unwritten agreement unthinkingly concluded by the lovers in the first weeks of their love. They are still in a kind of dream but at the same time, without knowing it, are drawing up, like uncompromising lawyers, the detailed clauses of their contract. O lovers! Be careful in those dangerous first days! Once you’ve brought breakfast in bed you’ll have to bring it forever, unless you want to be accused of lovelessness and betrayal.” —Milan Kundera, “The Book of Laughter and Forgetting”

I can think of so many ways to describe this book, yet only two words pop into my mind whenever I read the title: brilliant and hilarious. That says a lot considering I rarely laugh out loud while reading books or watching movies.

In this story, author Milan Kundera will help you take significant matters less seriously for a while.

Who wouldn’t want to go on an incredible journey with Socrates and a former championship athlete? This book is a masterpiece and I highly recommend it — especially now.

“Dead Poets Society”
by Nancy H. Kleinbaum
“We don’t read and write poetry because it’s cute. We read and write poetry because we are members of the human race. And the human race is filled with passion. And medicine, law, business, engineering, these are noble pursuits and necessary to sustain life. But poetry, beauty, romance, love, these are what we stay alive for.” —Nancy H. Kleinbaum, “Dead Poets Society”

Fun Fact: “Dead Poets Society” was made into a film starring my favorite actor, Robin Williams, as the professor.

I read this book when I was finally able to part from “Tuesdays with Morrie.” I like to think that it was the combination of these two that kept me going. With them, I found my urge to read.

My profound admiration goes to each author. By transforming their passion and inspiration into words, their books have become dear friends to readers all over the globe.