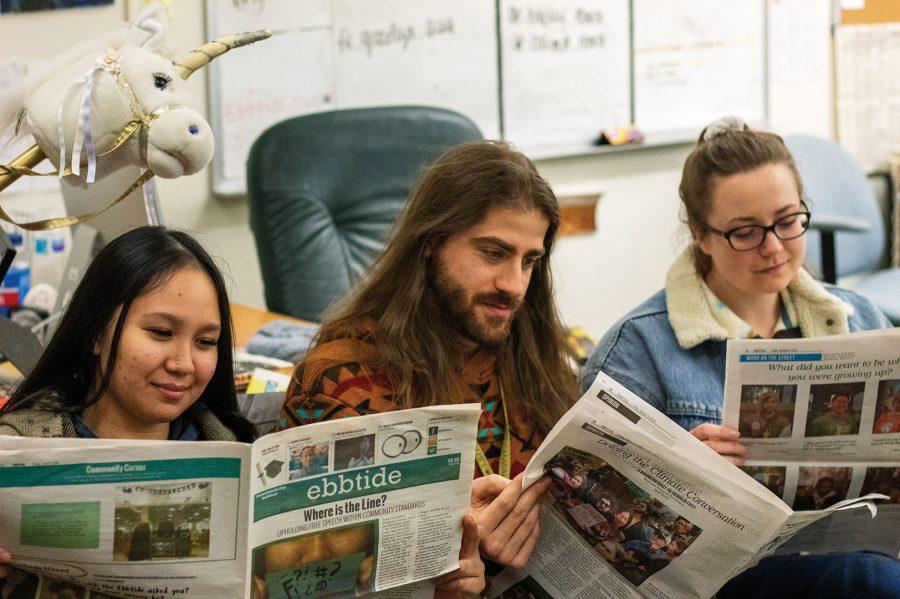 The Big Three pose for a photo on their last production night at The Ebbtide. (L-R: Azia Lualhati, CJ Priebe, Monika Likhtarenko (Photo Illustration by Joshua Groom / The Ebbtide)

Over the course of five decades, The Ebbtide has hired student journalists to steer the helm.

Unfortunately, this means our staff isn’t permanent. Our team comes and goes depending on their schedules, workload and personal lives.

But, we make do with who we got. This quarter sees “The Big Three” (the trio of editors who run, design and copy edit the paper) stepping down from their positions.

CJ Priebe, proud Hufflepuff and opinionated music appreciator, is leaving after a year as Sports Editor and a year and quarter as Copy editor for the Ebbtide.

Connor Tee, the Editor-in-Chief who hired Priebe, said he was “the answer to [his] prayers.” After losing another sports editor, Priebe stood out due to his “genuine interest, know-how and enthusiasm for the position.”

Priebe distinguished himself quickly, often taking on articles on a broad variety of topics (including a pair of entertainment award shows), in addition to his regular sports-journalism duties.

As copy editor, he stepped up as Editor-in-Chief Lualhati’s right hand, assisting and supporting wherever he was needed, as well as keeping the Ebbtide’s articles clean and readable (sometimes a more difficult job than you’d think).

Priebe always stood out in the newsroom, with his long hair and no-longer-long beard, where he has remained a perennial fixture for the last two-plus years. His smile brightened the room, and his witty repartee brightened the page. The Ebbtide endures, indelibly marked by his time here.

Monika Likhtarenko may have only been with the Ebbtide for three quarters, but she served as both the Photo Editor and the Design Director, in that order.

Likhtarenko supported a newspaper revamp and single-handedly implemented her own personal touch in each issue. She may have been quiet, but her talent with an online canvas spoke volumes of her dedication to the art of graphic design.

She joined the team during a chaotic change in paid staff, picking up the reins with ease as her creativity helped guide The Ebbtide to excellence. Likhtarenko was known to hold her own on production nights, being open and honest with her team on what she was able to do within the tight time constraints.

Although she had only been with us for a short time, Likhtarenko is highly respected for not only her craft, but her kindness. She kept long nights full of laughter and fun, always providing a relaxed environment despite the intensity of her job.

The Ebbtide is honored to have been graced by her attention to detail and adaptability.