Slow-Roasted Comedy: This comic duo laughs with you, not at you

There’s a new comedy troupe in town, and they might throw a few good-natured insults your way.

The roasting team, aptly named “The Honey Roasted Hams,” consist of theater veterans Danny Bracy and Holly Taylor who met during the callbacks of SCC’s production of “Live: From the Last Night of my Life.” The pair says they decided to form the duo last winter.

Bracy says that the idea stemmed from the pair’s natural tendency to make fun of each other. “That just made me think: ‘We should do this onstage,’” Bracy says. 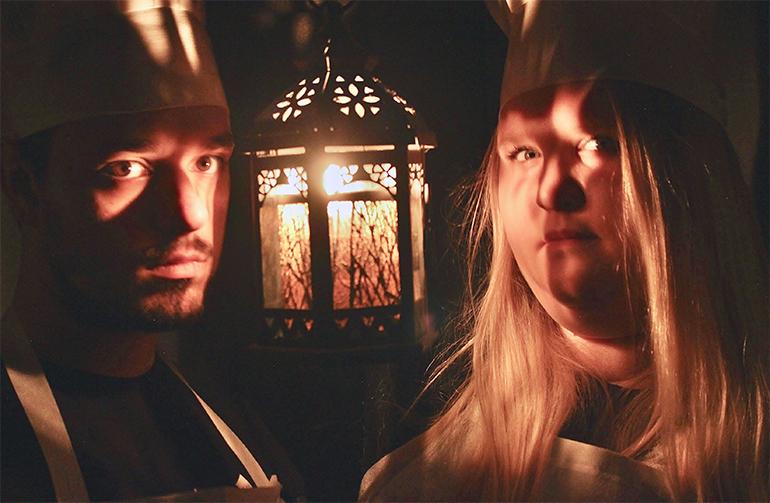 A Different Kind of Comedy

“Roasting” defines a specific type of performance in which one person will be the subject of insults thrown their way, usually being made fun of by a variety of different people one after the other.

“Roasting” made it big in the mid-1970s, notably with the advent of “Dean Martin’s Celebrity Roasts” all the way up through the 1990s and early 2000s with Comedy Central’s iteration of the trend.

Taylor has been at SCC for four years and plans to study nursing, while Bracy has been here for just as long but is set to graduate at the end of this quarter.

Taylor jokingly states that her introduction to comedy stemmed from her mother’s dark “nurse humor” that she brought home from the workplace. Meanwhile, Bracy says he always liked getting attention via laughs. Now, it’s less about the attention and more about the art.

“I really like providing that kind of entertainment,” Bracy says. “Seeing a live show that really just makes you laugh — there’s nothing like that.”

In their performances, the two will roast the audience as well as each other, although they don’t enjoy how the traditional style of roasting can easily turn disrespectful — hence the “honey roasted” aspect of their name and their attempts at sugar-coating.

They discussed their approach to respectfully roasting someone, which Bracy joking refers to as the “marinating process.”

“The goal is to kind of get to know the audience,” Holly explains. “So we’ll ask them questions about themselves and their lives and stuff, and then we’ll find little things about their lives that are silly or maybe don’t add up.”

Bracy notes that they have a set of rules they adhere to, listing race and physical appearance as topics they avoid.

He adds that they like to invent things about the person. “A lot of our insults will be totally made up, and the person won’t be offended because it’s not true,” he says. “They know we’re taking a little, tiny thing they might’ve said wrong and we are expanding it.”

Bracy and Taylor agree that this practice is similar to how stand-up comics make up fictional stories about their lives onstage in exchange for laughs.

Taylor provided a clear-cut example: “If we ask them if they have any cats and they say ‘no,’ we’ll be like: ‘Okay, so you hate cats.’”

The duo also like to take on a “good cop/bad cop” dynamic, where one of them will lift the roastee up while the other brings them down.

They have only put on one show so far, which took place at the end of July at Copious in Ballard, which they think of as a success.

Bracy feels that when it comes to comedy groups in the Seattle scene, “you kind of have to build a name for yourselves before you get crowds.”

“We want to build a show that’s high-enough quality that when somebody sees us once … they want to come see us again,” he says.

They haven’t yet performed at SCC, though they agree that it is an interesting idea to think about for the future.

The general structure of a “Honey Roasted Hams” show begins with Bracy and Taylor feeling out the audience by talking and asking questions.

Next, with different improv-esque situations already roughly in place, they decide on audience candidates (four or five total) live on stage to decide who they want to call out to participate. Taylor warns potential audience members to expect a “big shock” at their next performance.

But timid audiences, fear not — Bracy says the goal is that he and Taylor end up getting made fun of the most.

The Honey Roasted Hams will be appearing at The Pocket Theater in Greenwood on Oct. 25 for a Halloween-themed show that starts at 10 p.m.