SCC Choir Arises to the Occasion 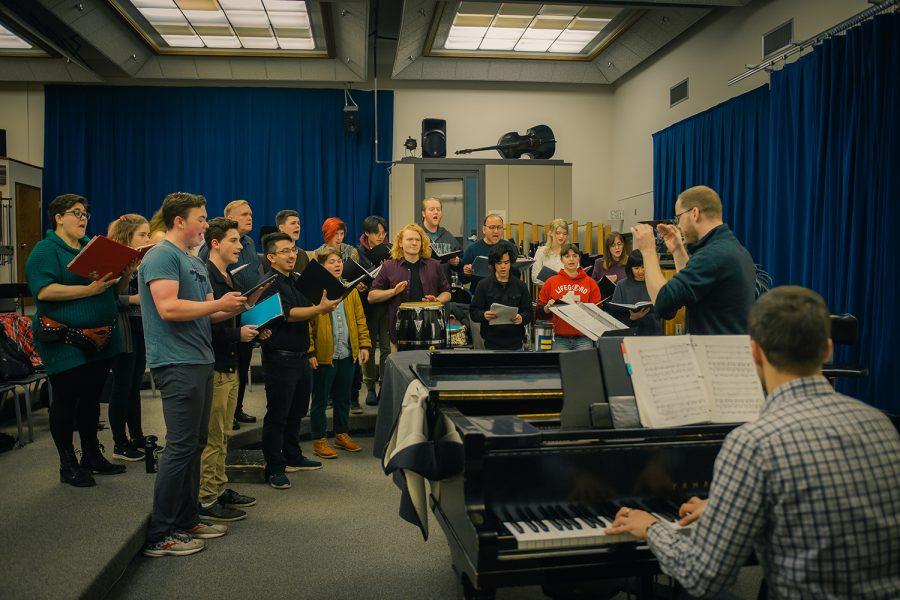 The members of Chamber Chorale and Shoreline Singers will unite for an optimistic evening of music. (Photo by Lance Allegro / The Ebbtide)

SCC’s choirs, Chamber Chorale and Shoreline Singers, will be joining forces for a fall concert called “I Arise.”

“I Arise” dabbles in concepts of thoughtfulness and how people carry themselves around others. Featuring a range of moods, the program is intended to either uplift a particular person or bring groups of people together, with an overarching themes of becoming one.

Norberg explained that the theme of the concert came about by coincidence, when he realized that the first two pieces he picked for each choir contained the phrase “arise” in the text.

Following this, he decided to curate the remaining repertoire around the theme, choosing songs with similar uplifting ideas regardless of if melodies were in major or minor keys.

Chamber Chorale is up first, ringing in their set with music set to Henry Wadsworth Longfellow’s classic poem “The Arrow and the Song.” The vocalists will sing the poetry to a thoughtful melody filled with intriguing anticipation.

“It’s a rather mysterious melody and poem at first,” Norberg says, explaining how listeners are initially unsure of the arrow’s fate before the story reassures them that it lands into a healthy tree — a metaphor for a song landing into the heart of a friend. “At the end, it sort of turns this thing from being kind of mysterious into a lighthearted, friendly, welcoming feel.”

Throughout the piece, the key turns from minor to major to mirror the transition from mystery into reassurance.

Norberg describes the next piece, “Salmo 150,” as an ominous, “fast and furious” homage to classic choral Latin, similar in pace to Edvard Grieg’s frantic “In the Hall of the Mountain King.” Symphonic in nature, its bright, staccato voices create driving forces that carry an exciting tune. A variety of instruments are mentioned in its lyrics, providing singers with the interesting task of mirroring each instrument’s sounds through their vocal stylings. Norberg describes the piece as “fun.”

“Dreams of Thee” is a piece by Eric William Barnum accompanied by both piano and flute, the latter performing a duet with the vocal parts. “It’s a slower, beautiful piece,” Norberg points out, explaining how its many mentions of “arise” plays into the crux of the concert’s theme.

“Dreams of Thee” paints sensory pictures of the scent of trees and sounds of a nightingale. Although it bears a happy, nostalgic mood, the lyrics at the end are bittersweet as they tell the tale of dreaming of the one you love before waking up and leaving some of it behind.

To round out the first half of the concert, the upbeat, driving “Shouting, Whispering Sea” provides an environmental story about how the sea can be calm and beautiful yet also tumultuous, serving a metaphor for our own emotions. Norberg describes it as a “fun little way of bridging the gap between what is reality and what is mental.”

Shoreline Singers are set to open with a Brazilian tune called “Muie Rendera,” which tells the story of women fawning over the idea of Lampião, the Brazilian equivalent of Robin Hood. The whimsical tune sees him telling the women that if they teach him how to weave, he will teach them how to flirt.

This will lead into the animated “Wenn so lind” by Johannes Brahms, which stars two pianists accompanying the choir for “Wenn so lind dein Auge mir.” This waltz’ storytelling is aided by its key changes.

The choir’s next piece, “The Lake Isle of Innisfree” by Duncan Tuomi, stokes imagery of peacefully living alone in solitude. The lyrics tell of creating a place of your own where you can be at one with nature. Lighthearted and thoughtful, Norberg describes it as a moment for the audience to relax and breathe in the midst of the heavier repertoire.

The optimistic “Blessed be the name of the Lord” sits in a 10/8 tempo that drives the lyrics along with vigor. In the middle, an a cappella section graces the song before jumping back into the vigorous melody.

The next piece, “Your Fragrance” by Edward Henderson, starts off with complex and intriguing sounds. Gradually, however, it sheds some of its haunting feel to acquire a more contemporary sound as the tenors and basses mimic the sounds of a layered rhythm section for the sopranos and altos to sing on top of.

“When Fields are White” rounds out the set. Norberg describes the theme of the piece by mentioning how although pictures or paintings don’t physically move, what they depict is dynamic. In the same way, the song’s lyrics move through each of the four seasons with four sections, during which singers employ different dynamics to distinguish between each one.

Where winter has tones that are sharp like ice, spring is bright and peppy. Likewise, summer and autumn move at a slower pace. Norberg encourages audience members to visualize each season as they listen. “The harmonies can inspire a color, or a picture or a memory,” he says.

To close the show, Chamber Chorale and Shoreline Singers will unite on the stage for a combined piece: Jacob Narverud’s fast-paced “Sisi Ni Moja,” which translates to “We Are One.” The piece features piano and percussion on a Djembe drum.

“Sisi Ni Moja’s” lyrics describe experiences that the entire human race shares. “It has a really great message that’s basically wrapping up the entirety of the concert in the idea that we are all one body, one people, and should be kind to each other.” Norberg explains. “It’s just a feel-good piece.”