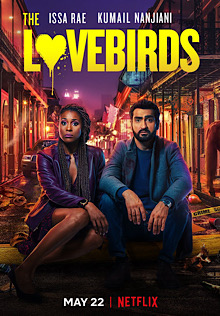 Michael Showalter’s “The Lovebirds” is a thrilling romantic comedy that blends themes of prejudice and self-discovery with decent execution.

The film’s diverse casting is somewhat rare for America’s big screen, but not entirely unheard of: It spotlights an interracial relationship between an African American woman, Leilani (Issa Rae, “Insecure”) and a Pakistani man, Jobrani (Kumail Nanjiani, “The Big Sick”).

The depiction of a South Asian and African-American couple hasn’t been seen in mainstream cinema since 1992’s “Mississippi Masala” starring Denzel Washington and Sarita Choundhury.
Plot
Set to a backdrop of New Orleans, “The Lovebirds” follows Leilani and Jobrani as they find themselves embroiled in the makings of a murder-mystery and cult conspiracy.

At the beginning of the film, the two fall in love the morning after a date and it’s all uphill from there. Viewers get to witness the gradual (albeit cliche) formation of their relationship, until the story cuts to a car ride four years later in which Leilani and Jobrani find themselves in a heated argument that seemingly brings their union to a solemn end.

Their lives are turned upside-down when Jobrani accidentally hits a man on a bicycle, who leaves in a hurry just as a man claiming to be a police officer commandeers the couple’s vehicle in order to chase the bicyclist down.

When the officer catches up to the man and runs him over before searching his pockets and running off, Leilani and Jobrani are left in a daze as sirens draw near.

Two civilians proceed to call the police on the couple, despite their best efforts to convince them of their innocence. Realizing how guilty they appear, as well as how their race might factor into the situation, they turn vigilante in an effort to solve the crime and clear their names.
Social Relevance
“The Lovebirds” explores the nationwide fear of police brutality, such as in a sequence where Jobrani suggests going to the authorities only for Leilani to turn it into a bit about how police would react to the truth. The scene hits home with its display of public opinion on the perception of law enforcement.

The film’s premise is similar to the action drama “Queen and Slim,” which follows an African-American couple who go on the run after killing a police officer during a traffic stop. “Queen and Slim” was released just six months prior to “The Lovebirds” and garnered critical acclaim for its social relevance.

While “The Lovebirds” may treat the subject with more levity, it’s not blind to the world we’re living in — and ends on a refreshingly optimistic note.

Everything comes full circle by the conclusion of the story, resulting in payoffs that are somewhat predictable but nonetheless funny. Although the film was not very revolutionary as a whole, the two leads did their thing and made it memorable.

“The Lovebirds” succeeded in capturing my attention all the way through through its display of raunchy comedy and star power.

”The Lovebirds” can be streamed on Netflix