How a comedy classic flipped its script 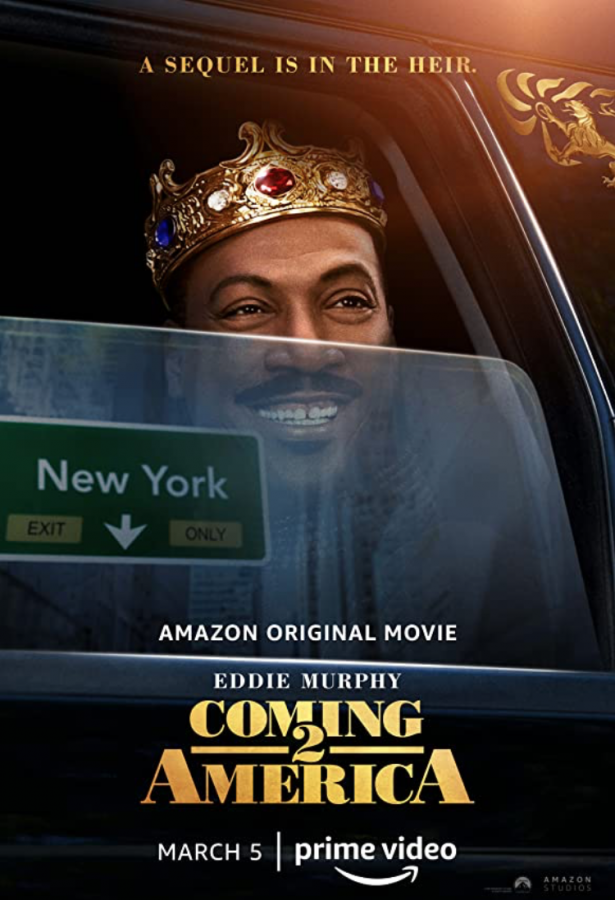 Directed by Craig Brewer, “Coming 2 America” calls upon Eddie Murphy’s earlier work — such as his role in Landis’ “Trading Places” — and comments on current pop culture. New members to the cast includes Jermaine Fowler (“The Opening Act”), Leslie Jones (“Trainwreck”) and Wesley Snipes (“Dolemite Is My Name”).
Recap of “Coming To America”
In 1988, Prince Akeem Joffer (Murphy) and his friend and servant Semmi (Arsenio Hall) traveled from the fictional country of Zamunda to New York City in an attempt to outrun a loveless arranged marriage.

During the expedition Akeem falls for a woman named Lisa (Shari Hedley), whom he opts to shield his identity from. But when his father Jafe (James Earl Jones) locates him and reveals his royal secret, Akeem and Lisa are put at odds until he confronts her and proposes his undying love.

In the end, they all live happily ever after.
30 Years Later…
The sequel takes place the morning following the 30th anniversary of now-King Akeem and Lisa’s wedding in Zamunda.

This time, Akeem and Semmi return to America to search for Akeem’s estranged son Lavelle Junson (Fowler) at Jafe’s request. The goal of the expedition is to arrange another marriage in order to keep peace between Zamunda and Nexdoria, a country ruled by the sneering General Izzi (Snipes).

Mary Junson (Leslie Jones), who had Lavelle out of wedlock, believed at the time of his conception that Akeem was just a deadbeat she met at a club. It’s 30 years later on Lavelle’s birthday when they receive a surprise visit from the long-forgotten Akeem, who offers Lavelle a unique opportunity: to claim the throne.
Cultural Identity
While “Coming To America” saw Akeem and Semmi venturing out to the Big Apple, “Coming 2 America” flipped the script by bringing New York City to Zamunda. Lavelle follows Akeem’s lead in the story by learning about the history of Zamunda, and eventually the exploits of his father’s journey to Queens.

The character of Lavelle was somewhat reminiscent of “Black Panther” antagonist Eric Killmonger (Michael B. Jordan). Fowler even rocks the same haircut that Jordan dons in the first half of the culturally-influenced Marvel flick.

They also both reconnect with their roots, although under drastically different circumstances. Where Killmonger’s arc was marked by the tragedy of losing his connection to his people, Lavelle is a street-smart kid who’s given the opportunity to explore his past with a flair of his own.
Then and Now
I can’t quite recall the first time I watched the original film, but I do remember experiencing a general feeling of wonder at the culture of Zamunda. What hadn’t dawned on me was the significance of it being a box office hit with a majority Black cast — a feat which wasn’t too common at the time of its release.

Those familiar with the source material will know that some of its humor wouldn’t fly today. The sequel addresses this shift in politics by making its characters aware of the progression of the “Me Too” movement and similar campaigns.

However, while Akeem may be more progressive than his father, there’s an underlying layer of hypocrisy in the proposition he makes to his son, seeing as Akeem dodged his own arranged marriage three decades ago.

Overall, “Coming 2 America” is a whole lot of fun.