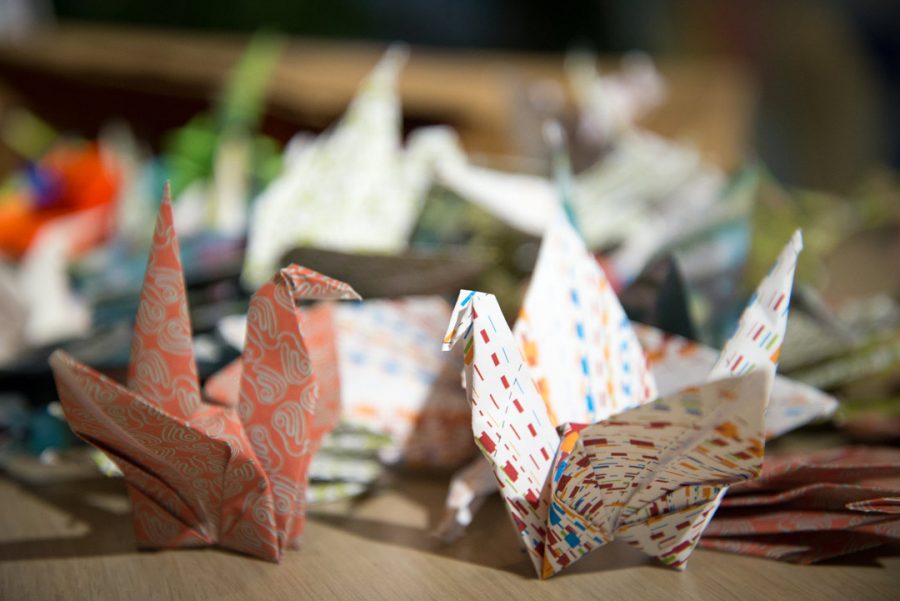 Scattered around campus are a giant pencil, “graffiti walls” in bathrooms, paper crane-making stations and other works of public art created by students in Art 110, “Three-Dimensional Design.”

Class instructor Matt Allison says that throughout the quarter, students have worked on smaller projects that explore the elements and principles of design, and have built up to this final project.

Before making their final sculptures, Allison’s Art 110 students wrote proposals detailing their plans for site-specific, three-dimensional artworks. Allison recommended that students create artwork out of cardboard, but many students found that their projects led them to other materials.

One project Allison noted as particularly successful this quarter was Emma Parkinson’s 1,000 Crane project. Parkinson has set up stations across campus for people to make origami cranes. The stations are located in the Library’s new Makerspace, the Visual Arts Center (2000 Building), the International Education Office (third floor of the PUB), the Counseling Center (5245) and in Advising Services (5229). Each station includes materials, instructions and an explanation of the idea behind the project, which is to create a symbol of optimism in trying times.

Allison says that students are required to display their public art piece for a minimum of one week, but the showing of Parkinson’s project will bleed into next quarter — once the thousand cranes are completed, they will be assembled and installed in the library.
With so many people participating in this project, Parkinson has tapped into one of the concepts Allison says he tries to express to students — “The more an artist engages the audience, the more they can convey a message.”

This project is the final for Art 110 every quarter Allison teaches it. In spring quarter, the class will be held at 12:30-3:10 p.m. on Mondays and Wednesdays.