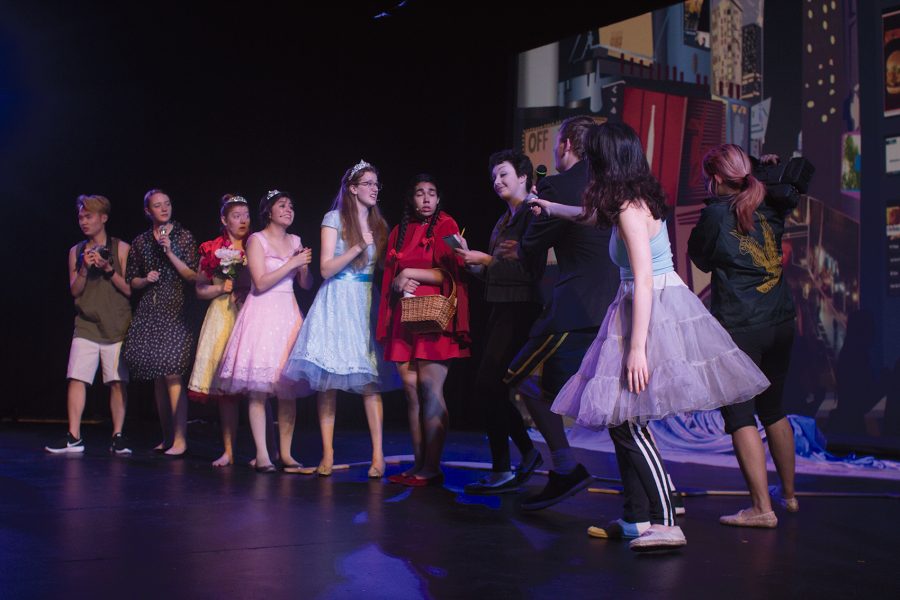 “OFF WE FLY NOW” FAILS TO TAKE OFF

Disney, the Brothers Grimm, we all know some variation of the famous fairy tales of our childhood.

SCC’s new play includes some of the leading ladies in these fairy tales. And it failed to impress.

“Off We Fly Now,” directed by SCC drama faculty Duygu Monson, featured background animation by students in the visual communications program. The play focuses on Snow White, Cinderella, Sleeping Beauty and Red Riding Hood, all of whom break out of their mundane storybook lives and drop into the real world, where the rules of make-believe aren’t exactly applicable.

The play was written by Zeynep Kacar, a playwright from Turkey, Monson’s native country. Annika Knapp directed the choreography.

However, these leading actresses had their work cut out for them — it seems that “Off We Fly Now” fell short of everything but their cast.
The Characters
Bolder’s representation of the 6-year-old Red Riding Hood was hilarious, but the script seemed to paint the hooded child as a snappy high schooler with an attitude and the vocabulary to match.

Among pinky promises that reminded me of pre-teen years and flamboyant hops and flourishes of their dresses, these princesses cussed more than I thought any princess would.

“Burn this fucking place to the ground!” Sleeping Beauty (Ward) exclaimed fervently in the second song.

Ward’s strong vocals were scored with pain, frustration and longing. The audience could hear and feel Sleeping Beauty’s desperation for a life without a century-long slumber.

But the dialogue was unnecessarily vulgar and could have been toned down.

And the audience won’t be able to forget all four of the ladies’ explosive “fuck you’s” when they all lose their drunken minds as they realize that life isn’t always about happy endings.

The lead performers weren’t the only ones who had debatable lines.

Marcel Grant, who played the only Prince Charming, said upon entering the stage, “I am sex!” Grant’s gold pants gleamed in the spotlight, yet they reminded me of the wrapper on gold Magnum condoms — cheap and reflective. It wasn’t that Grant looked bad, he was hilarious and played his part well.

Also, the hobby horse toy sewn to Grant’s golden crotch was certainly an unforgettable sight and succeeded in surpassing the stereotype of Prince Charming and his steed.
The Story
The first scene draws the viewer in, but does not hold them there.

The four princesses kneel in the darkness, encircled by the supporting cast, as an eerie music box melody echoes behind them.

Nearly obscured by the shadows of the performers on the screen behind the stage, a hand draped in a white lace sleeve scribbles in near chicken scratch with a red quill pen on plain paper while everyone but the princesses rotate in jerky, puppet-like movements.

After nearly falling asleep to the cliche fairy tale premise, I was woken up by a more upbeat musical number. What truly got my attention was hearing Ward’s character, Sleeping Beauty, say, “Ladies, we’re all fucked.”

She was right, this production was.

The princesses’ main issue throughout the play is that they’re stuck living the same life every day. This issue is relatable to real life, where it can feel like you’re just doing the same thing again and again.

According to Sleeping Beauty, “The fairy tale never changes.”

Following the realization that one of their own, Rapunzel, played by Knapp, has escaped the storybook land, the princesses decide that maybe they don’t want a “happily ever after.”

“Off We Fly Now” did a great job in showing how hard it is to escape our comfort zone. The princesses’ experiences are stunted by their own ignorance, their desperation to leave their pasts behind and their high expectations of the real world.

The princesses enter the real world, where those expectations were challenged.

And upon landing in their new home, the ladies were immediately surrounded by frenzied journalists.

How the journalists knew their favorite storybook characters escaped to the real world? Nobody knows. Furthermore, the production doesn’t explain what type of connection the made-up and real world even have.

Cameras flash. Reporters ask questions. Despite the princesses leaving their own world in efforts to escape the trappings of royalty, they end up becoming willing celebrities.

The escapee fairy tale heroines rise to fame. Money rolls in, lovers roll out and the princesses live out the life directed by the red carpet. Few scenes show the young ladies’ growth and eventual decline.
The Grand Reveal
Remember Rapunzel? The catalyst for all of these events?

Deciding to mention the most pivotal member last, Rapunzel gives a down-to-earth interview. In the midst of what seems to be an ill-mannered argument, she tells her story of how she escaped her fairy tale, traveled the world and settled down as a writer.

Knapp’s motivational speech to Rapunzel’s less-than-worldly friends was one of the more memorable speeches.

Her performance as Rapunzel was the most clear-cut one. She was realistic, easy to believe and probably the most relatable in terms of her script and how her life turns out.

Rapunzel seemed to be the only princess not corrupted by money and fame. She represented a relatable version of someone flying the coop, while her old friends fell from the nest.

“Nobody lives happily ever after,” Rapunzel said.
The Final Thought
I wish I could forget the abysmal, slap-dash lyrics of the final trio of “musical” performances. The actresses’ vocals were not horrible, but the words could have been much better.

“Off We Fly Now” was a bumpy ride without a seatbelt. The audience was dropped into plot holes and swerved into unclear time lapses before eventually coming to a rickety stop at the end of the road.

The cast and crew worked hard, as I’ve seen in the past, but “Off We Fly Now” did not showcase the best of their abilities.