A Play on Words 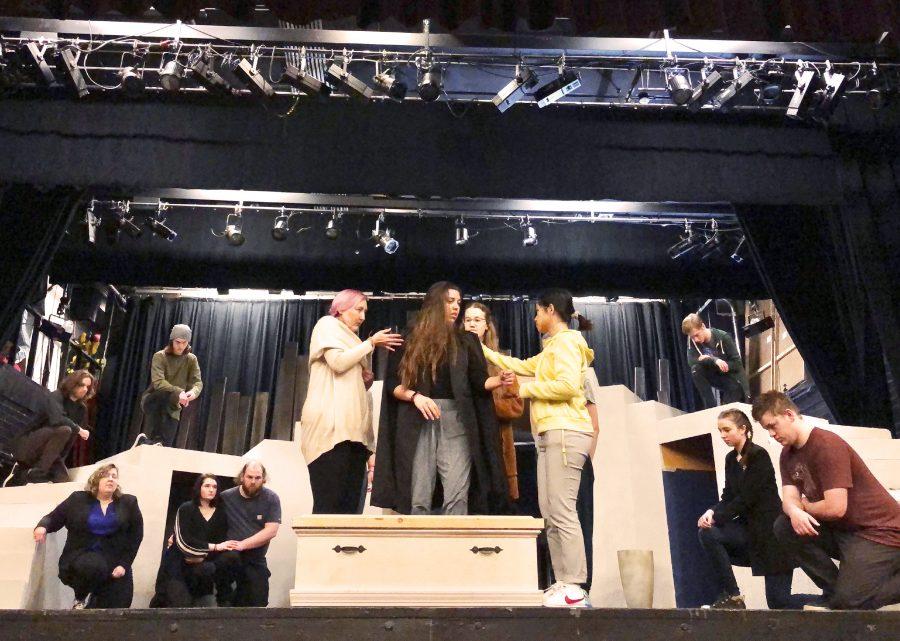 SCC took on an ambitious execution of William Shakespeare’s renowned tragedy “Macbeth” this month, and the entire theater was held under its sinister spell.

The cast of “Macbeth” during rehearsal. Photo: Nova Clark

Directed by SCC drama professor Debra Pralle, “Macbeth” tells the story of a man blinded by the paranoid belief that he will become king, along with the bloody murders and supernatural antics that ensue as a result. Upon viewing the premiere, it was clear that the cast and crew had poured tremendous amounts of hard work into bringing this timeless warning of corruption to life.

On stage, the setting was tangible: A large, blocky structure fitted with stairs and passageways evoked feelings of a barren village, and the bleak, grey color scheme captured this dystopian vision effectively. The structure was surrounded by tall, stick-like set pieces which resembled the remnants of fences.

After the house lights faded to black, deep oranges and purples gradually bathed the scene. A cloud of fog emitted from the main passageway in the center of the set, and somber, foreboding cello music filled the air. “Macbeth” had commenced.

It soon became apparent that costumes were utilized to signify universal themes of war. When a sergeant (Danny Davis) appeared on the stage in a wheelchair wearing a white blood-stained t-shirt and camouflage pants, it evoked visions of Vietnam. Other characters donned long, grey military coats reminiscent of World War II. Even still, some wore camouflage in the style of present-day uniforms.

The actors, who missed a total of seven rehearsals due to snow, had a commendable grasp on the meaning and delivery of their archaic English lines, performing the prose in a way that was understandable for the average viewer.

Throughout the show, flashes of white lightning and booming thunder summoned the play’s notorious witches (Malissia Woodall, Kennedy Clark and Ayumi Shinjo). Both the actresses and their characters alike seemed to have a delightful time pulling the strings of the story.

They first encountered Macbeth (Nathan Long) as he and his friend Banquo (Avery Medalia) walked home after a lengthy war. The witches planted the promise of royalty in Macbeth’s mind, but fled without telling him how he would obtain it, leaving Macbeth and Banquo to laugh off the encounter — unaware that this was the beginning of a long, violent chapter in both of their lives.

The combat sequences, which consisted of daggers, staffs and sword fights, were brilliantly executed and provided a healthy dose of realistic action. These interludes of violence sneaked up when least expected, adding shock and emotion to the given circumstances.

A major highlight was Amanda Korkunis’ performance as Lady Macbeth. In character, she and Long were the ultimate scheming couple, although her evil intentions began to dominate, leading to a spiral of insanity that Korkunis played to the audience with unsettling intensity.

Shakespeare’s famed story of undeserved power was wrapped up wonderfully by the witches, who emerged at the very end to reprise their famous line, “When shall we three meet again?” The sentiment serves as a powerful hint that the fatal fallout of greed won’t end with Macbeth.