Want Change? Vote For It in the Student Body Presidential Election

Students can now vote for only one position in the student government, and their chance to cast that vote is Monday, April 17 through Friday, April 28. Over the years, the Associated Student Government has repeatedly reduced the number of ASG positions students can vote on. It happened in 2011, 2013 and now in 2017, with the Club Affairs Officer being relegated to a hired position. The only position students can now vote for is their student body president. 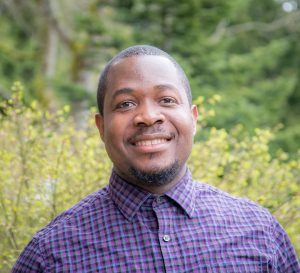 Kiazolu intends to create new ways for students to have an open line of communication with their president. Of the current student body president, Kiazolu said that he believes, “He’s not reaching out to more students.”

If elected, Kiazolu will install comment boxes for students around campus, in the library and in the PUB, and meet personally with students in an open forum every two weeks.

“That’s something that’s going to happen before I leave this place,” he stated.

Like many students, Kiazolu dislikes the high prices of food in the PUB. “You can’t really bring the prices down,” he said — though he wants to reduce them by at least 50 cents or a dollar.

Kiazolu is from Liberia, but cares deeply about the issues of domestic students. He wants to see more domestic students in leadership roles, and he wants to bring more textbooks back to the bookstore. He’s been a student at SCC since last spring, and has been in the ASG for three quarters, serving as a student representative and Student Advocate. Leaders he admires include Desmond Tutu, Mahatma Gandhi, Nelson Mandela and Abraham Lincoln.

After college, he intends to advocate for men, women and children who have been abused. He even has dreams of becoming the president of his home country. Besides English, he speaks some Swahili, Arabic, and dialects of Mande like Vai and Gola.

Kiazolu may have great ambitions, but he understands his limitations: “You can’t change everything. You can’t eradicate corruption. But you can minimize it.”

His goal is not to be famous, but to work internationally. 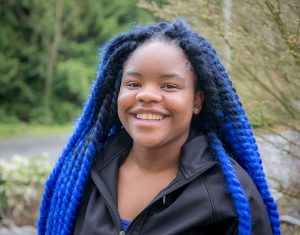 She was, however, elected Junior Class Senator, and would have served a full term if she hadn’t gotten her GED and began college at SCC.

An active student at SCC, Chishungu said that she was in the Bible Club last quarter. She wants to see the SCC parking problem fixed, and believes there is space on campus that could be used as student parking, like near the gym: “This is gonna be the year, I’m determined to fix it!”

Chishungu stated, “I never knew the president of this school until, like, three days ago.”

She said that she has heard from fellow students that they didn’t care about the student body president election — she believes they should.

“Think of Donald Trump! You should care,” she said.

Chishungu wants to work to get students involved in student government.

“I want to get to know people, so they know who’s representing them,” she said.

Chishungu wants SCC to be a welcoming, inclusive school. She was amazed when one day she asked a group of students sitting in the PUB together where they were from. One was from China, one from Japan — each student at the table was from a different country.

This inspired her idea to start a Welcoming Committee, if elected. “Every time a new student comes in, we’ll have a person assigned to them, you know, to show them around school, make them feel like they have a friend, basically get to know them, and show them around the city.” 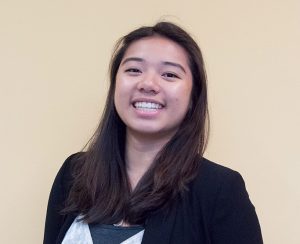 A student in her fifth quarter at SCC studying food technology, Anggari worked as a student representative before being promoted to Communications Officer in the ASG. To make student life better at Shoreline, Anggari wants to do the things students want.

“I won’t be one of those people who tell you that something’s gonna happen just to get your vote,” she’s said.

A problem Anggari knows students want addressed is parking. It’s an issue Anggari doesn’t think will be solved with something like a parking garage that could take years to make, or a parking lot no one can find space for. The answer, she believes, could be “Re-modernizing the parking lines to make up more space for more cars, because it’s slanted.”

She intends to extend the Shoreline shuttle from the Sears parking lot to the E Line, so that students who take the bus can benefit from it too. The project is funded by the Sustainable Commuting Options Fee (SCOF) committee, and the ASG has tried to push for the shuttle extension repeatedly in the past.

“This is something that should have been solved years ago,” Anggari said.

She’s confident in her peers, saying, “Out of all these years, the other student governments that tried to do it, we’re the ones succeeding.”

Her goal is to start the shuttle extension at the end of spring quarter of this year.

“It’s important to know, and to believe it, that your president candidate will do what they say they’ll do. A lot of people know that about me,” she said.

She said that if students take issue with the fact that they can now only vote for one position in the ASG, she will “definitely” pursue that.

In reference to the current student body president, Anggari believes she and he “approach things very, very differently.” She believes a president’s main responsibility is to do what the students want to be done.

In the last student body president election, there was only one candidate, which some students thought was wrong. Now, students have the opportunity to be more involved with choosing their representatives.

That involvement can begin on April 17, during the candidates’ open forum. Voting will begin immediately afterwards. Students need their Student ID and their PIN, which by default is their birthdate. Students can vote on their smartphones, on their computers or at any of the computer polling stations that will be set up in the PUB. The polls will close on April 28.

The forum will be 12:30-2 p.m. on April 17 in the PUB Main Dining Room.
Students can vote at app.shoreline.edu/StudentElections